BEST OF 2013
with Kenneth Kimbrough

As the year closes, it’s time to reflect on the different things that made it great and the other things that made it not so great. I tend to frown on the word “best” mostly because I majored in philosophy and I’m pretentious. So let’s just consider this more or less a “Favorites of 2013” list. 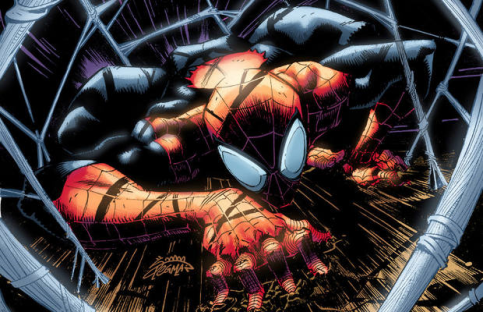 Despite the internet’s vitriolic reactions towards this book, Dan Slott and company managed to inject fresh life into the franchise. I admit, #700 made me angry and left me moping around the house for a few months, but I can’t accuse Slott of bad storytelling. The follow-up so far has been an interesting ride with its own ups and downs. But now more than ever I’m ready for Peter to come back and find his life utterly destroyed.

“Try the red one.” Six months later, this line still gives me the shivers. This issue is the culmination of every battle Matt Murdock had faced in Waid’s run on the book. He had been winning too often and it was time for him to suffer a defeat. And boy does he suffer a defeat. But it’s not just Waid’s sharp writing that makes this issue my favorite. Chris Samnee gets to show off his storytelling skills big time here. He has easily made my top Daredevil artists up there with Frank Miller and Wally Wood. And finally, this book wouldn’t be the same without Javier Rodriguez’s colors. I cannot stress how important color is in comics and how it can affect the mood of a book. I just want to frame every page of this issue. 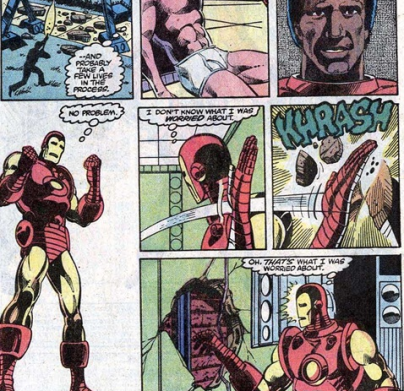 I’ll be honest. I haven’t read much Iron Man. My longest run on the book was in the mid-2000s from Ellis on “Extremis” to the Knaufs’ awesome Mandarin story. So when I decided to read Denny O’Neil’s run on the book, I wasn’t quite sure what to expect. It’s in this run that Tony’s alcoholism gets so bad that Rhodey has to take up the mantle of Iron Man. And this first issue is a perfect introduction to that status quo. It’s here that Rhodey first proves he has what it takes to pilot the suit. Although he’s taking on Z-lister Magma, Rhodey really shines in this fight. McDonnell’s art really impressed me this issue, and I think he’s a wonderful storyteller. I just wish he had done more work as a comics penciller. 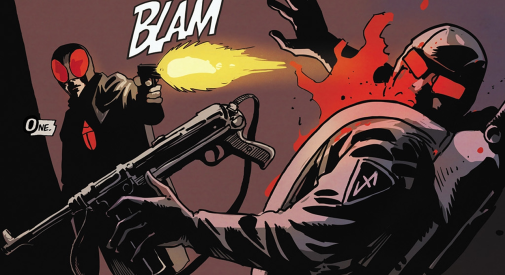 Limited Series
The Black Beetle: No Way Out – Francesco Francavilla

Francesco Francavilla has rapidly become a name that will get me to blind buy almost any book. I had been anticipating this series ever since I read the first story in Dark Horse Presents. And Francavilla delivered like a pulp-churning boss. The Black Beetle is hardcore, and he fights Nazis on jetpacks. I make a special point to show off the hardcover to any soul unfortunate enough to come over to my house because I believe everyone needs to read this book. If you love comics, you owe it to yourself to pick up the collection. I can’t wait for the next volume. 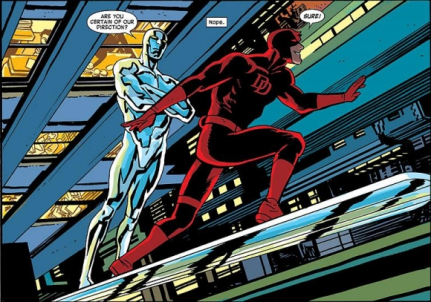 I have enjoyed every single issue of this series. every. single. issue. Waid and company have created my desert island book, and I can’t wait to see what happens when the book relaunches next year. 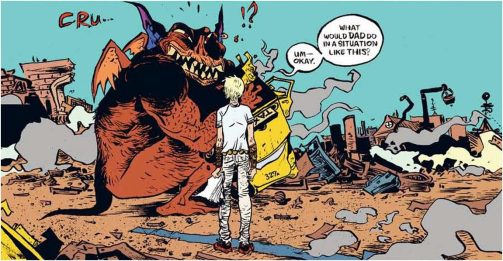 I can’t even begin to describe the craziness of this book. Imagine that the son of Thor teams up with the daughter of the Rocketeer to fight hooded chainsaw-wielding ghouls. And that still doesn’t do justice to what a fun read this is. This book is a huge showcase for Paul Pope’s chops as an artist and writer. If I were to get a tattoo, it would be of the entire book. 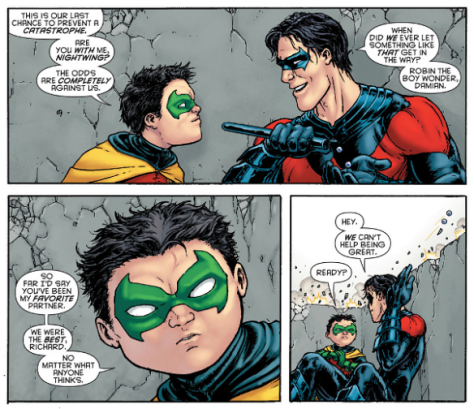 It’s been a big year, and it’s easy to forget that we lost one of the greatest Robins early on. After watching Damian Wayne grow into the Robin mantle for years (yes, years), it was that much more heartbreaking to see him take one final stand against his tyrannical mother. It didn’t help much that he had touching final moments with many of his closest allies. I want to hate Grant Morrison so badly for this, but to be honest, Batman Incorporated was one of the best titles at DC for a while. It embraced the concept of legacy and the various ways the DC universe can be completely bonkers. The final arc just makes me miss Morrison that much more for it. 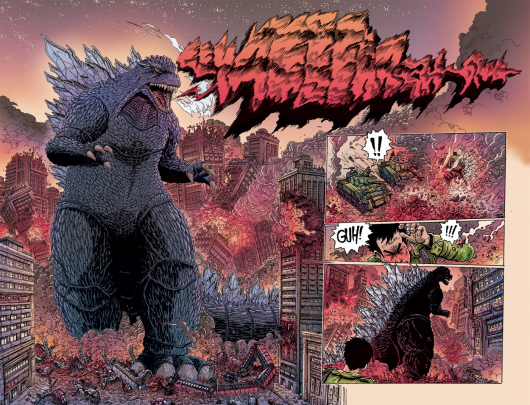 This is a bit of a cheat because half of this series came out in 2012. But James Stokoe kills it on Godzilla: The Half Century War, which is the greatest Godzilla comic ever conceived. Every page has so much detail that you could pore over it for hours. All of the monsters are lovingly rendered, and most important, they appear powerful—so big that the panels themselves can barely contain them. I just hope Stokoe gets another round on the franchise while IDW still has the rights. 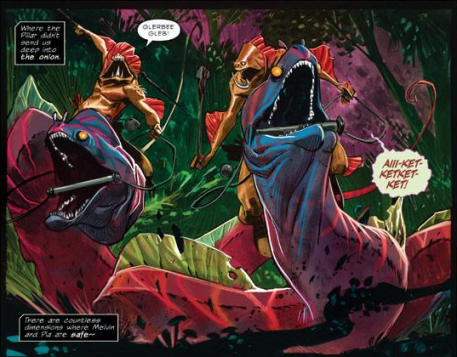 Dean White was my first pick for colorist all year. Every single thing he colors automatically turns into a trippy prog-rock album cover. There’s an awesome pastel look to his comics that you just don’t see very often. I can’t wait to get Black Science in a nice big hardcover. Don’t crush my dreams, Image! 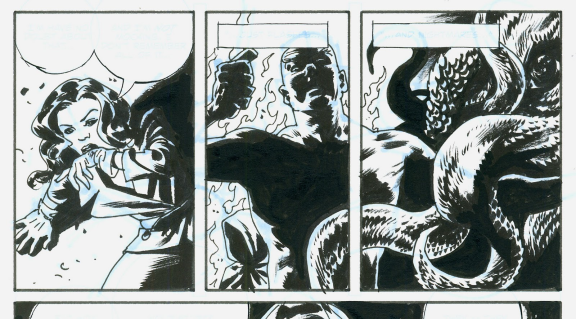 Hands-down. Fatale would not be what it is without Phillips’s masterful sense of contrast. Even colored, the book is soaked in a heavy black. And it makes all the noir-ish difference. 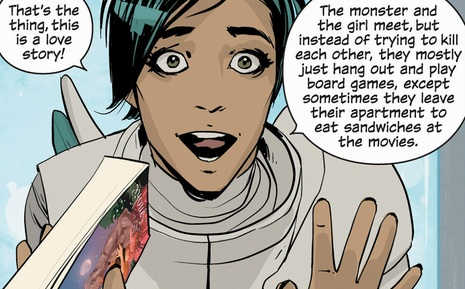 Is it any surprise? In the very first issue of Saga, Vaughan made me buy his and Fiona Staples’s fantasy universe, not through rules or plot or any of that other writing 101 crap. He made me believe that a winged lady shacking up with a horned dude would say “Who the fuck is Gwen?” Each character has a relatable personality, and that’s rare in most comics. Even the bad guys are strangely loveable in a human way. And this far into the series, I’m glad to say that the amusing interactions between characters haven’t let up. I’m definitely getting Saga when they inevitably release it in hardcover. 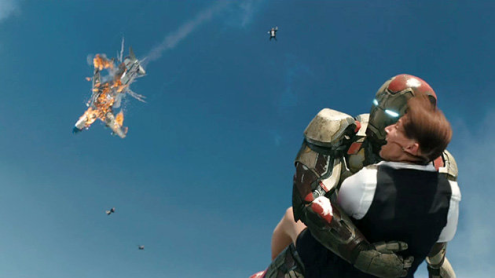 This was always hands-down my pick of the year. Following all of the previous Marvel movies, this one comes off as kind of strange. It feels like Iron Man meets Lethal Weapon meets E.T. meets Terminator. It was a risky move, but it paid off in the end and firmly established that post-Avengers Marvel Studios was not letting up. I was especially glad to see that Tony wasn’t fighting guys in robot suits this go around, as that gets old really fast. It was also nice to see a superhero movie where characters were actually doing superheroic things, and the mid-air rescue scene still stands out as my favorite superhero save of the year. As a bonus, the blu-ray has a Peggy Carter short that convinces me that she should be the head of S.H.I.E.L.D. because Peggy Carter don’t play around. 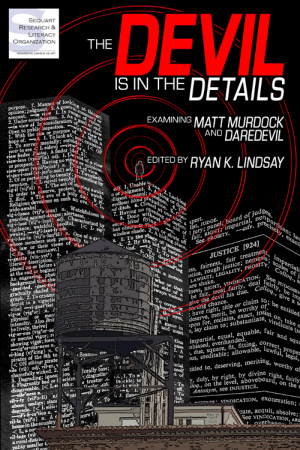 Comics-Related Book
The Devil is in the Details: Examining Matt Murdock and Daredevil – Edited by Ryan K. Lindsay

Sequart’s collection of Daredevil essays is fantastic. My personal favorite is Timothy Callahan’s essay on Mike Murdock, which proves just how much of a jerk Spider-Man can really be. After this book, I have a hankering for DD back issues. Any takers? Christmas is right around the corner. 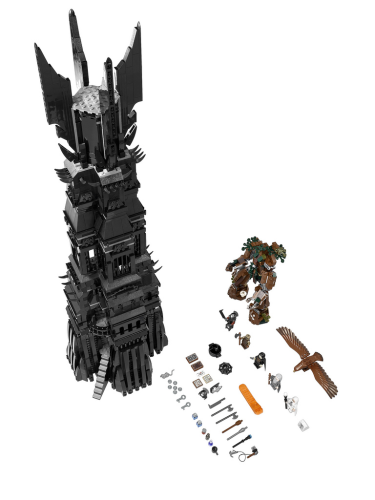 Geek-Related Merchandise
LEGO Lord of the Rings: The Tower of Orthanc

Google this thing now. My wife bought it for me as a wedding present (she got a Nintendo DS, but honestly, I got the better end of the deal). It is one of the few LEGO sets that will not fit on top of the bookshelf because of how tall it is, and I currently have a few Spider-Men hanging from it just to prove a point. The ent that comes with it is also a plus because I have it giving the stompdown to a nearby orc forge. 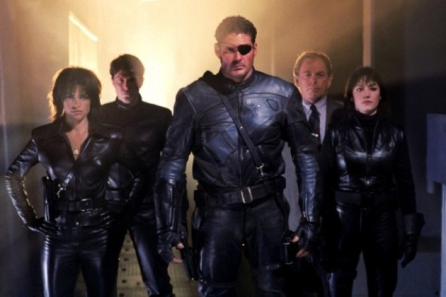 Up until this point, I was drinking the Marvel movie kool-aid, solo cup and all. Then Agents of S.H.I.E.L.D. happened. I stuck around for four episodes, but even then, I have ask my past self why. Between all of the constant Avengers cleanup, clunky characterization, and downright ineffectiveness of the team, I could not in good conscience continue to subject myself to the program. All of the characters are constantly tripping over each other for the LOLZ, and any attachment quickly turned into heat-seeking rage over stupid decisions that top-level S.H.I.E.L.D. agents should not make. I miss the days when S.H.I.E.L.D. was less bureaucracy and more guys in eye patches punching Hydra agents. 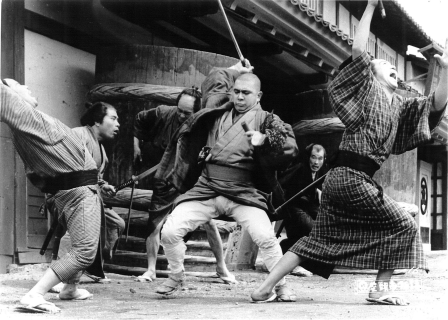 Final Thoughts
Overall, it seemed to be a good year with Marvel coming out on top. Aside from two great movies, they managed to relaunch most of their line with some heavy-hitters like Superior and All-New X-Men. And they don’t seem to be letting up any time soon. On the other side, DC seems to be needing some editorial reform to keep their creators from walking off books. As for their movies, they seriously need to lighten up in tone. Man of Steel had some great moments, but I was shocked by how little fun I actually had while watching it. Luckily, I’m already planning on 2014 being a big year for comics. Who knows what it will bring? I’m certainly excited.