When James Robinson left Earth 2 and effectively severed ties with DC, at least for the foreseeable future, I feared there would be an extended period of time without an on-going title being written by the outspoken and innovative Robinson. So when it was announced that the prolific writer was coming to Marvel I was ecstatic but the good news was far from over. Not only was the wait for Robinson’s return relatively brief but he was going to be writing an Invaders on-going series for the second phase of Marvel Now. I was over the moon! Robinson is arguably the most well suited writer working in comic books today to write an Invaders book. His mastery of super hero tropes and ability to tell character driven stories within the worlds of the fantastic and super powered are legendary. Robinson’s ground-breaking and ingenious run on Starman is thought of by many as the preeminent super hero narrative. In that imaginative and influential run, Robinson melds the cosmic elements of science fiction with the traditional super hero saga to create something far ahead of its time.

Here in the first issue of All-New Invaders, Robinson reunites four of the original WWII era members who until recently were thought to be dead or otherwise out of commission. However with Bucky back in action as the Winter Soldier and Jim Hammond returning as the Human Torch, Marvel put all the pieces for a successful re-launching of one of the oldest and most iconic teams in the extremely capable hands of James Robinson and Steve Pugh. This is a much more significant endeavor than Marvel’s previous attempts at establishing the Invaders as a first rate team on par with the Avengers and X-Men franchises. In light of the proven success of The Guardians of the Galaxy and the speculative success of the Inhumans, the Invaders are looking to make it a trifecta for Marvel perhaps more so than the Fantastic Four, who are coincidentally also being given a creative and directional makeover by Robinson in a few weeks, because of the eclectic nature of the individual members. Beyond reuniting these original characters, Robinson places the Invaders into the cosmically influenced world of Hickman’s Avengers making them relevant in a way they have never been before. The story picks up directly from the Marvel Now Point One Special that came out two weeks ago. If you have not read that before reading All-New Invaders #1 you might want to do so simply to have a better understanding of events involving the Kree and why they are here on Earth at the start of this issue. These events underlie the entire story and figure largely into the narrative involving Tanalth the Pursuer and her insatiable desire to kill Jim Hammond. The action in this book is epic, in fact when these two face off in the middle of the small town’s main street the ensuing pandemonium is on the scale of Superman and Zod’s battle in this summer’s divisive blockbuster, Man of Steel.

Robinson does an excellent job of re-introducing Jim Hammond, spending the majority of the issue bringing us up to speed on Hammond’s new small town life with his job as a mechanic and quiet work-a-day existence before it is so quickly shattered by the arrival of Tanalth and her troops. Robinson deftly weaves in flashbacks connecting the past to the present and more fully revealing just who Hammond is and why these things are happening to him. The history of this team plays an important part in defining who they are going to be in this current run which is an area where Robinson particularly shines. His best work comes out of the storied past of iconic characters, for instance his Justice Society of America, All-Star Comics and even his Earth 2 run all have roots in the histories of those characters giving his stories a sense of grandeur and prominence. That being said don’t expect a review of Invaders history in this issue, quite to the contrary Robinson hits the ground running and doesn’t look back until well into the latter half of this book. He is more concerned with telling a new story built on a foundation of the past than re-telling tales of former glory days. The All-New Invaders is part of current continuity and this story is an integral part of the 616 complete with effects and ramifications affecting other A-list titles. After reading the first issue it seems that the invaders are going to be around for a while this time. 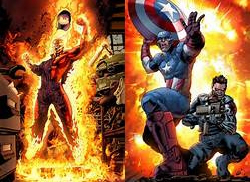 Steve Pugh’s style has evolved since his Animal Man run to the point of becoming something else completely different unto itself. Here is a more polished Pugh with less of the energetic and intense lines of his previous work replacing it with a more precise clean line more suited to the traditional super hero story. His storytelling and use of a quasi- grid style page layout retains the feel of the golden age while his dynamic character design and cinematic approach to framing bring a modern sensibility to the book. Pugh is a perfect fit for Robinson’s narrative and for the Invaders overall. This creative team is well within their element and the result is a spectacular super hero book with a unique dynamic and team chemistry, the full potential of which has only been touched upon. 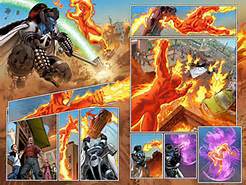 All-New Invaders is remarkable in its fresh approach uniting the nostalgic and the contemporary. James Robinson’s meticulously detailed storytelling and painstakingly developed characters make this an infinitely enjoyable issue. The action is intense and bombastic while the drama is poignant and genuine. Jim Hammond is a likable character, one whom you want to see succeed. Robinson does a superb job of endearing Hammond to us almost immediately. I felt emotionally invested in this narrative from the start. Steve Pugh brings a cinematic sense to the visuals, electrifying each page with vibrant, vital imagery. I do not plan on missing an issue of this series so long as the standard this creative team has set with issue one is maintained. I highly recommend picking it up (4.5/5) and sticking around for a few issues, James Robinson has been known to tell a good story now and again. So until next time, Excelsior!