‘iHero’ has a premise I’m surprised I haven’t seen elsewhere.  The idea is simple: an amazing tool has been invented and released to the public - the iHero.  This device gives the user access to a large range of superpowers such as flight, teleportation, and super-speed, all of which we see right off the bat.  Invented by mega genius Jack Taylor for his company ‘Pear Industries’ (complete with a logo of a pear missing one bite), this tech is a subject of as much praise as it is disdain.  While some use the iHero to be actual heroes, there are of course those that would use it for the exact opposite.  As is discussed in the comic, the device grants you powers, it doesn’t make you a hero outright.  Good people use it for good, etc.  This tech is not without its side effects, however, as some users find themselves strapped with brain damage and mental illness due to their use.

The comic opens on Jack Taylor announcing the iHero, which sports an Apple looking design, as would be expected.  As he explains the product, an example of one using it for flight is given as a young man goes zipping up into the sky.  This is followed by a quick series of panels giving us more ideas as to how one might use the device.  One is a man using super-speed to run through his office work, but the most clever of the set has to be the woman teleporting to her husband, who is in the middle of committing adultery.  Let’s just say her reaction is both awesome and somewhat horrible.  Revenge through super-powers, super-powers through technology!

A short scene begins with thugs using the iHero to change their looks, to fit into a bank unnoticed.  Through the use of a news channel talking head, we learn that Britain has passed a law banning the sale of an iHero to anyone with a criminal record.  We get a quick panel of protestors in front of the White House, proclaiming that this move would be “against their civil rights and liberties”.  Why the Americans are so freaked out about a British law makes a small bit of sense, but here it feels tossed in.  We cut to a super-powered Jack Taylor zipping over the ocean to meet a new character, Icon.  Icon is a classic Golden Age type hero and unlike the iHero users he seems to possess powers all on his own.  We learn he is an outdated, over-the-hill hero, but when Taylor offers to pay him to join up with his Hero Institute (basically a team of superheroes much like the Justice League, etc.) the down on his luck hero is back in business.  With his daughter, who also has her own set of super skills.

This is where the comic begins to lose me.  We are basically thrown into a two page ‘Icon, the First Superhero’ story, though I use that word very lightly.  It’s basically two pages of Icon where nothing happens at all, really.  Why it’s shoved into the comic at this point is unclear, though I am assuming it will make more sense as the title goes.  Even still, it is a poor choice of placement, and an even poorer choice when it comes to what’s represented and how it effects our interest in the character of Icon.

From here onto the end of the issue we have the death of a character, what looks to be a formation of a team, and a cliffhanger ending.  There is more among this last half of the book, it’s just so muddy I find it hard to see the connections to a lot of the scenes.  Writer Luke J Halsall really wants to get some intrigue and questions going right out of the gate, but there are too many at once and in all they aren’t anything that makes me curious.  The main reason for this lack of interest is from the characters.  Between the four main characters we have Jack Taylor, who is so obviously Tony Stark it got in my way of enjoying the book.  In a similar vein, Icon is nothing more than the usual Superman type of classic hero, with no spice or life to really give him anything unique.  The mysterious Sovereign is 100% a female Batman, no two ways about it.  If this is done as a cheeky parody of these incredibly established character stereotypes it’s not in any way obvious in this book.  Sadly there is nothing in the way of further characterization after we first meet these characters, and Halsall’s leaning towards wooden dialogue doesn’t make this any easier.

The artwork in this book is nicely rendered, simplistic, and only a little messy.  What makes the art work here is the amazing use of color - from the dark streets and skylines to the glowing and beautiful powers at work.  The lettering is also a major player here, with sound effects that look great and are used creatively throughout.

I liked this comic, I really did.  Don’t let my critiques fool you.  If the creators here can pull this together tighter in the next issue or so this is a concept I’d love to see explored even further.  It read easily and the artwork is nice and fluid.  Where this issue fails is in its strong lack of characterization.  Instead of focusing so much on setting up future stories and over explaining the iHero and its uses, I feel there should have been more of a balance between that and the reader getting to know these people.  Without that, how are we to care about the mysterious hints and glimpses at what’s to come? 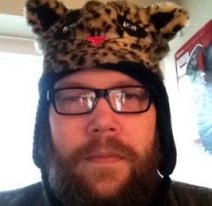