Greetings fellow Gothamites, this week we are coming to you from stately Wayne Manor, just 14 short miles northwest of Gotham City down Old North Pass. Lots of news from Hollywood this week on the Batman Versus Superman movie and all the hoopla surrounding the cinematic Bat-Universe in general, some big names weigh in including the most recent Dark Knight Christian Bale as well as avid Bat Fan and one of AMC’s Comic Book Men, director Kevin Smith. END_OF_DOCUMENT_TOKEN_TO_BE_REPLACED

The Couch Nerd: Quickie for the Week

Hello Ladies and Gentlemen! We are in for a wonderful week with the big kick off of three of two of our major shows that we will be following here at the Couch Nerd. For a quick reminder, I try my best to warn about spoilers, but I can’t always promise that I will not remember to do so. (I had someone ruin Harry Potter for me, so since then my spoiler soul has been dead.) END_OF_DOCUMENT_TOKEN_TO_BE_REPLACED

Before I read this final part of Trinity War I thought that it was on course to be a very satisfying, entertaining and thought provoking event. END_OF_DOCUMENT_TOKEN_TO_BE_REPLACED

Begun the Trinity War has. Sorry. I couldn’t resist. Justice League #22 kicks off one of the most complex and multi-facetted events in recent memory. Geoff Johns takes elements from all three Justice Leagues as well as heavily mining material from the Shazam/ Black Adam back-up story that recently ended in Justice League#21. It takes a master story teller like Johns to weave a unified narrative out of so many components but he is off to an intriguing and exciting start. END_OF_DOCUMENT_TOKEN_TO_BE_REPLACED

The Grid is a database in Cyborg’s program consisting of nearly every super-human on Earth including their code names, powers and how to contact them. He uses it in Justice League #18 to contact potential recruits needed to free up the core members to deal with the ever-growing demands they find themselves faced with. END_OF_DOCUMENT_TOKEN_TO_BE_REPLACED 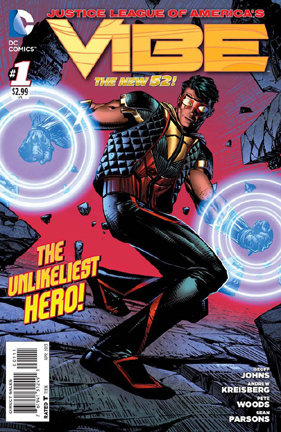 Sometimes rebooting a character can leave some of the more interesting aspects of the original behind.  In this recently released ‘New 52′ reboot of 80′s hero Vibe, the boy who becomes Vibe isn’t the previously deceased Paco Ramone, ex-gang leader and overall street smart kid, but Francisco “Cisco” Ramon (why they dropped the ‘e’ in “Ramone”, I have no idea), a youthfully excited kid living with his Father and two brothers, Armando and Dante in Detroit.  Armando is the oldest of the 3 brothers, and is looking to leave for college soon, so he can return and help his younger siblings make their way, as well.  As they are discussing their collective futures, the blast of a Boom Tube opening right near them startles Armando into action, attempting to pull Cisco to safety.  As Armando continues to pull at his brother he calls out to Dante for assistance, who - frozen in fear - stares back, but does nothing.  Suddenly, a Parademon appears and before Cisco’s unbelieving eyes kills his brother, Armando.

Five years pass, and it’s a Remembrance Day for all that were lost during the Darkseid invasion the Boom Tube was a part of.  It’s especially hard for Cisco, watching the news feed, as Armando was the very first person killed in the attack.  Of course, this makes his older brother the perfect ‘poster child’ for the tragic losses people across the globe had experienced.  After meeting with Dante over a burger, Cisco is approached by Agent Dale Gunn of A.R.G.U.S., the militaristic organization put together after the Darkseid attack to deal with Super Powered incidents.  It seems as though someone has been caught on camera saving a woman from being robbed at an ATM.  The picture of the hero is completely blurred, but Cisco is told that he is the one in the photo.  Why he doesn’t know this isn’t talked about, and this situation at the ATM is never brought up again.  Very odd.  Agent Gunn explains that, when the Boom Tube hit so near to him and Armando, Cisco was caught in the Event Horizon, where he was exposed to “inter-dimensional winds”.  This has changed Cisco’s “Internal Vibration Frequency”, making him no longer fully in sync with “the rest of the world”.  This not only causes him to be completely blurred in photos, videos, etc., but also gives him the ability to sense beings and energies from other dimensions.  The remainder of the story has some ‘spoiler’ moments, so we’ll just leave it at that.

This is a good title, one I enjoyed more than I thought I would.  It is a perfect example of how to introduce (or reboot) a character.  It’s a great opening chapter that gives us enough meat and bones to get a good idea on Cisco and his world, and it brings you to care about him, even in this very first issue.  Writers should take note, as the horrible state of first issues these days have them feeling more like half an issue, rushing through the needed plot and character points to get issue #2 in your hands.  This story is told with grace, and feels like a complete intro because of this.  Some future drama between Cisco and his family is firmly established, as are problems within A.R.G.U.S. itself and what it might mean for our new hero.

Some things that stood out, however, were the artwork and the suit design.  The art is decent, but sometimes boringly so.  It’s competent, but nothing new or interesting.  There are some flubbed panels occasionally, and the style seems to take a few changes throughout the issue.  The suit looks ridiculous, like some poor attempt at character design in the old “City of Heroes” PC game from a decade or so ago.  It’s ugly in color and design, and is distracting in it’s oddly thrown together look.  Had I not read this for review purposes, I most likely would not have read this at all.  He really looks that annoying.  Another thing that got to me is this new group (as of ‘Justice League’ #7 last year) A.R.G.U.S.  In many different ways - the uniforms and battle suits they wear, the A.R.G.U.S. logo covering everything, a bunker with huge computers, and Agents - it makes me wonder -  is this just DC’s unoriginal version of S.H.I.E.L.D.?  To me, it certainly seems that way, and their greater presence in these books as they progress is already getting tiring.

Even with all that being true, the characters and story have me hooked enough for now, and I’ll be moving on to issue #2 as soon as it’s out.  Not a complete package, but a good read and a greatly executed intro to a ‘new’ character.