I believe it goes without saying that if you haven’t seen the Captain America: The Winter Soldier trailer yet then you need to stop reading! Watch the trailer and come back! Spoiler Alerts***Major! END_OF_DOCUMENT_TOKEN_TO_BE_REPLACED

Gerry Duggan and Brian Posehn have written the “Pagliacci” of comic books, in the pages of their “The Good, the Bad and the Ugly” story arc beats and breaks the heart of Marvel’s merry mercenary. However Duggan and Posehn have shown us that Deadpool is much more than END_OF_DOCUMENT_TOKEN_TO_BE_REPLACED

The Good, the Bad and the Ugly just keeps getting better, and part three is a perfect amalgamation of all the things that make us love Deadpool. The humor is stepped up a bit in this issue compared to the previous two parts but the tonal shift to darker more complex emotional subject matter is still very evident. END_OF_DOCUMENT_TOKEN_TO_BE_REPLACED

I arrived at the Baltimore Convention Center prepared for the second day of Comic-Con completely solo. My comic book compatriots had abandoned me opting for END_OF_DOCUMENT_TOKEN_TO_BE_REPLACED

We are breathlessly approaching the conclusion of Rick Remender and John Romita Jr’s epic opening story arc, with one issue remaining the complex multi-layered plot shows no signs of slowing. END_OF_DOCUMENT_TOKEN_TO_BE_REPLACED

There is light at the end of the tunnel but will Cap survive to reach it and if he does will he be in one piece, recent events in Zolandia would make this a tough call. Issue number seven begins with a flashback two years prior to the events currently taking place. END_OF_DOCUMENT_TOKEN_TO_BE_REPLACED

The first astonishing issue of Age of Ultron left the readers with many unanswered questions, which we find out the protagonists and supporting characters are pondering themselves. Ultron’s extreme onslaught brings on a feel that is like no other we have seen before. END_OF_DOCUMENT_TOKEN_TO_BE_REPLACED

I’m new to Bag and Board so go easy on me now guys, this is also my first review, you can say I’m a nooby. I’ve been looking forward to reading Age of Ultron for quite some time now, ever since I’ve read “Age of Ultron coming soon” in the back of The Avengers, AU free comic in May of 2011 issue #0.1, yeah I’ve been kinda sitting on the edge of my seat waiting or this block buster of a miniseries. END_OF_DOCUMENT_TOKEN_TO_BE_REPLACED 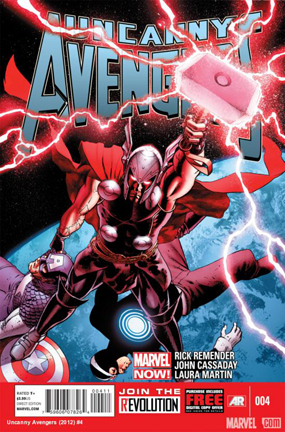 I should begin this with saying I am one who really enjoyed last year’s “Avengers Vs. X-Men” crossover event, and honestly think it was one of the most fun events since the whole ‘House of M’ imaginative craziness.  That said, I am very excited and surprised at how Marvel has used the large number of crossovers it has had in the past decade or so and woven so much of them into current continuity.  Titles from all over the Marvel spectrum have been the direct result of these events and major story arcs, like the “New Avengers” focus on the Illuminati, “Civil War” still being mentioned and the ramifications still felt.  This is the kind of Marvel Universe they had always teased at since I was a kid.  Instead of guest starring roles, hero-vs-hero battles, and team-ups to integrate the Universe, it feels to me like they have done a damn good job running the threads from these into the titles they have today.  Which brings us to this title, “Uncanny Avengers”.  This is one I came in a little late on, but since issue #2 I’ve had nothing but excitement for this book.  I really enjoy the ‘casting’ so to speak, and feel they have already become a cohesive team.  I was at first annoyed at Captain America being a member, but when he named Havoc as team leader I felt a bit better about it.  It still bothers me a bit, but - hey! - it’s an “Avengers” related title, so you get what you get.  Mainly, Cap and/or S.H.I.E.L.D.  And that’s fine.

The first arc for “Uncanny Avengers” have been a blast, and that’s both a pun and a truth.  After the events of “A vs. X”, Professor Xavier is dead, and the Red Skull has a plan - take Xavier’s brain, somehow attach it to his own, and gain Professor X’s psychic powers.  The ‘Uncanny Avengers’ team, while being formed as a sort of publicity stunt to show the world mutants and humans can work together in peace, quickly finds themselves in their first adventure - and one that just might kill them.  Red Skull, using the powers of Xavier’s brain as a device for mind control, sets his S-Men and the now-enthralled civilians of the surrounding area against the team, and even mutants as a whole.  As people are given the ability to see the mutant in people who may or may not know it, they become a mob of murder, beatings, and blood.  Heroes are beat to bulging versions of themselves, a God is controlled by Skull - so much goes bad in the first three issues that it left me waiting for this newest one with an almost ‘happy panic’.  So, I got it, and read it.  And, even with some things that stuck out in a bad way, I really, really enjoyed it.

Crafting such a smooth and excitingly told story in only four issues is a feat for any writer, I’d imagine, but Rick Remender once again rises to the occasion.  The characters, while well known already, have found a new space to grow in this title, and Remender has used it to it’s maximum potential.  Rivalries and tempers still flare from “A vs. X”, Havoc’s fear of failure is strongly developed, and given even more depth with a flashback scene of young Alex and Scott, surviving a horrible situation.  In that tiny scene it explains the brother’s constant struggles without needing more (for now), or not being enough.  The writing and script, through all four issues, is just like that, as well.  Not too much or too little, just a well written arc with some very interesting character development and high-end action and drama.  It really hits you as this story unfolds, the scale and scope of what is happening, and by the time you arrive at issue #4 you feel like you’ve been through the same violent and disturbing fight the team themselves had just been through.  The story is rough, takes no prisoners, and is as brutal as it needs to be.  Again, there’s that balance.

I do have one beef with the writing, and that’s in the way Remender handles Cap.  As stated, I know it’s almost always a guarantee that he will be in any “Avengers” oriented book in one fashion or another.  It’s his crew, I get that.  But a lot of times, and especially in this title, he never really feels like more than a cardboard cut-out of Captain America, even when he fights aside or within whichever team.  That’s why it disappoints me so much in this particular comic, because of the great character building that the title is filled with.  Captain America has been around a long time, and his story and character has been explored in more ways than most comic book characters in history, but there *has* to be more, or something else you can add to the legacy.  Really, there has to be growth, which I don’t see at all in “Uncanny Avengers”.  It’s just stereotypical Cap doing what Cap does.  The entire situation around him is becoming worse than a nightmare, and the only character not written like they’re actually in the midst of such a battle is, of course, Cap.  It’s awkward, and makes me wonder why he’s even here in the first place.

My main problem with this title is, no matter how much I love it and enjoy reading it, I can’t get around John Cassaday’s art.  His art is workable, and isn’t exactly horrible or even bad, it’s just boring.  Sadly, as the issues go onward, his work gets a bit worse each issue, until we get the seemingly hyper-rushed mess that is the art in this fourth issue.  Some scenes look pretty good, but then you’ll get a handful of panels that look more like rough sketches that were accidentally inked.  His work is mostly clean and clear, as it tends to usually be, but some of the work in this title has made me even less of a fan of his, and to be honest I wasn’t really one to begin with.

This title is awesome, fun, huge, and deeply character driven in the down-time.  It is one I will be gladly buying as they’re released.  I just wish they’d get somebody else on the artwork.  Sorry, Cassaday, but you and Cap are the weight on this otherwise effortless comic. 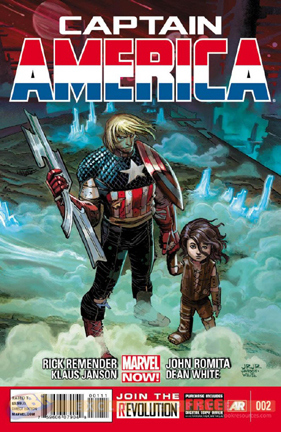