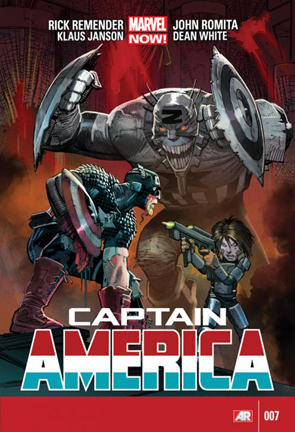 There is light at the end of the tunnel but will Cap survive to reach it and if he does will he be in one piece, recent events in Zolandia would make this a tough call. Issue number seven begins with a flashback two years prior to the events currently taking place. Cap and his unofficially adopted son Ian are having a father/son conversation over dinner on a desolate hillside. Ian asks Cap if he misses his old life and Cap expounds on the relationship he had with his father and waxes philosophical on the meaning of true happiness. This is a poignant moment both sincere and serene in tone. However that idyllic calm is shattered on the very next page. We are brought up to the present which finds Steve Rogers a bit worse for wear, his hair is cropped and his costume is even more tattered and stitched together in more places. He is hacking his way through Arnim Zola’s lackeys, taking their heads off with his shield as he makes his way into Zola’s stronghold. He is in search of Ian who has been captured and set to be brainwashed before being brought under Zola’s wing.

Cap fights his way deeper into the inner sanctum before he is confronted by Zola’s warrior daughter, Jet Black. She brings to mind Big Barda in appearance complete with regal headgear and statuesque build. Black proves to be more than Cap’s equal in combat however, he is able to reach out to her and win her over to his cause, for the time being anyway. She takes Cap into her confidence revealing to him that they are not merely in a city but a battle station, one that is about to lift off and rain Hell down on Cap’s homeland. She goes on in great detail to describe how this assault is going to transpire and the damage that it is going to inflict. Zola plans to take control of thousands of high value targets including; super beings, world leaders and the affluent, infecting them with a potent liquid consciousness. The only option remaining is for Cap to get to Earth and warn of this coming attack. He believes that The Avengers still exist in some form and that they are his, and the Earth’s, only hope. Jet Black agrees to help him get back only if Cap will promise to give Ian a normal life. She tells him where Ian is being held but before Cap can get to him the Zola virus he is carrying flares up and renders him unable to walk. As if this isn’t bad enough a virtually paralyzed Cap is then shot in the chest by the last person he would expect of such a vile ruthless act. What an ending! This is truly my favorite issue of this series and I have loved them all thus far. Remender has created a world that feels like equal parts Jack Kirby and 40’s radio sci-fi serial. This is so shockingly different from what Ed Brubaker has given us that it has put some readers off. To those readers I would most emphatically state, read this! It is not the intrigue and espionage that Brubaker thrilled us with but it is solid and entertaining writing. Remender perhaps even more so than Brubaker gives us a Steve Rogers that never says die, a man who beyond all reason will not stay down but keeps fighting for the greater good whether that be the safety of the world or the love of a father for his son.

Remender’s characterization and imagery is enthralling. His world of Dimension Z and its inhabitants are the stuff of nightmares. Arnim Zola is as terrifying a villain as you are likely to find, part Darth Vader, and part Charles Manson. He has given John Romita Jr. some amazing images to work with and JR Jr does his usual brilliant job. Romita Jr is quite possibly my favorite artist of all time. I have been a fan of his work for such a long time. His epic run on Amazing Spider-Man is without equal but I think he may out do himself if he stays on this book (and I hope he does). I have heard some people criticize his work because of the exaggerated heads and  wide-eyed features of his characters but that is what make his work so great, his unique perspective and take on anatomy. The way he renders the action sequences is par excellence, the fights and violence here take on a poetic look and feel very much like a ballet, similar to the tone he used in Kick Ass.

Klaus Janson is a seasoned, meticulous inker. He has inked some of the greatest works of Frank Miller and does a fantastic job here inking over Romita’s awesome pencils. Dean White brings out the nuances and details with his amazing colors; Dimension Z truly comes to life when he has added his impeccable touch to the finished work. Visually this book is a slam dunk home run with some other sports metaphor thrown in (I don’t know many I always got picked last). Anyway just flip through this book and you will see what I mean.

Over all Captain America is a top notch comic book, although it is not the same Cap that Ed Brubaker wrote, it is still Steve Rogers and he is being written and drawn by two of the best in the business. Please don’t be afraid of Dimension Z this is good stuff, give it a chance. This book is consistently entertaining and always leaves you wanting the next issue so for those reasons and many more I would rate it a 4.75 out of 5, in other words damn near perfect.

So until next week, see you at the comic book store my friends.