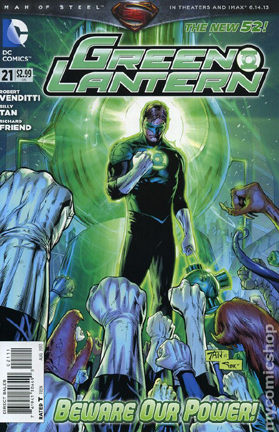 It was so strange to see a new issue of Green Lantern without Geoff Johns’ name on the cover. For nine years the two names have been synonymous. Now Robert Venditti has some huge shoes to fill and he has started that task this week with issue 21. After reading this I had the distinct feeling that I had just read a first issue, not that the whole Green Lantern Universe has been turned upside down. It hasn’t. It’s just that after nine years this book had to be a very definitive jumping on spot, and it is. It is written very much like the Green Lantern film but better. Venditti does a fine job of giving Hal Jordon a personality, not quite the same one that Johns’ has built over nine years but the differences are subtle, so far.

The story covers a whole lot and is paced so briskly that it felt like I was finished reading it in a matter of seconds. It begins on Oa in the very near future with Hal leading a rag-tag unit of surviving Lanterns against an unseen enemy. Their rings are running low, roughly 20% charge remaining on each ring. The tattered band of Lanterns makes their way to the central battery only to find it dead.

In the present Hal and Carol Ferris are having a very deep conversation focusing on the state of their relationship. Carol is having some misgivings about her feelings for Hal and if they even in fact constitutes love at this point. Although she admits that she is happy to have him back following his ordeal she is unsure whether or not she is happy with him in the larger sense. Hal is smug and sure of himself bordering on arrogance as always. He handles the situation with a smirk and a convenient exit provided by his ring. This seems to suit Carol just fine as she expresses her need for some time apart from her space hopping ring slinging boyfriend.

Hal is called to Oa to the planetary citadel. Inside the evidence vault he meets up with Kyle Rayner. This scene has the feel of a James Bond film where Q demonstrates all the new gadgetry to a roguish disinterested Bond. There are strange weapons aplenty covering tables and walls, as the Guardians go about the work of filing these things away one of them rather nonchalantly informs Hal of his promotion to corps leader, effective immediately. The interaction between Kyle and Hal make this scene one of the lighter hearted of the book. Venditti nails the camaraderie those two share with some very fine dialogue. The voices of these characters are very believable and ultimately they are both likable guys. Venditti again shows his dialogue chops in the next scene between Hal and Kilowog who has taken over for resigned Lantern Salaak.

Kilowog is sitting alone processing the rings of the fallen which are being held inside a containment field. Hal makes his first command decision and releases the rings to find new recruits. Once loosed the rings fly off in search of worthy sentient beings to replenish the corps. Before Kilowog can finish voicing his disagreement with his new leaders decision Larfleeze and an army of constructs turn the Oa sky orange as they descend. Kilowog calls all Lanterns to battle but there are scarce few to answer his call. The Sciencells are even emptied to meet the need for combatant defenders. The ensuing battle is without a doubt one of the highlights of the issue. Billy Tan does an excellent job of rendering the action.

The final page shows the rings begin to return with reluctant wearers who have already made their desire to leave evident. They pull the rings from their fingers and plead to go home, not the start of his new corps Hal was hoping for to say the least.

All in all I think Venditti did an admirable job. The story was fast paced; the characters and dialogue are lively and complex. I really liked it and I am an unabashed Johns fan. As such I certainly had my reservations going into this but like a Blue Lantern I had hope. This book had to be received well I think more so than any other DC book this year. We know Batman is safe in the infinitely capable hands of Snyder and Capullo, Trinity War is a no brainer that it will perform and sell well but the fate of Green Lantern rests with Robert Venditti and Billy Tan. The tone is different but all the elements that make for great Green Lantern comic books are there. I think the “Dark Days Ahead” look very bright indeed.

Billy Tan is a seasoned veteran and I have been a fan of his work for some time now. So when it was announced that he would be doing the pencils I breathed a small sigh of relief, at least the book was going to look good, and it does. Tan does a fantastic job here turning in some of his best pages. His re-design of Oa looks less like a city from a fantasy novel and more like an expansive metropolis. His character designs are spot on from familiar facial features and expressions of the human characters to the more imaginative looks of the aliens, he nails them. Tan does an especially fine job on Larfleeze giving him the sinister look of a humanoid dragon.

This creative team has proven themselves up to the task but unfortunately for Venditti the inevitable comparisons to Geoff Johns have only just begun. He probably will never outrun the very long shadow that Johns’ stellar nine year run has cast over this character. This and the arduous chore of placing the other Green Lantern titles upon his shoulders merely by virtue of setting them up in this book make Robert Venditti’s  very enviable new assignment a blessing and a curse.  I look forward to what this team is going to bring us and I wish Robert Venditti and Billy Tan a very long and successful run.

This is a perfect jumping up spot for anyone who may have had the misfortune of missing Geoff Johns’ run on Green Lantern. As I said it reads very much like a first issue; lots of set up but no lull in the action. Fine artwork and solid writing earn this book an 8 from me but the sky’s the limit from here, great start. Until next week, see you at the comic book store.