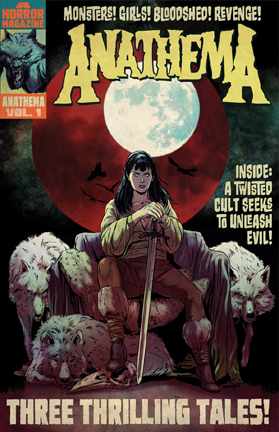 Greetings from the Wasteland!
*Warning here there be Spoilers!

I came to this book through social media and the wonders of the comic book convention.  (I will not ever stop talking about the wonders of the Con, I don’t want to and you can’t make me.)  I was browsing the list of artists that were going to be at C2E2 when I saw the name Rachel Deering, and upon further digging found the name of the trade she had recently penned, Anathema.  I checked it out and made sure her booth was a stop on my stroll through artists’ alley.

Anathema is the story of Mercy Barlowe, a woman born in a puritanical time filled with monsters and zealots. (You decide which is the more terrifying.)  The trade collects the first three issues in the series.

Deering’s story is thoughtful and provoking and at the same time has what I can only describe as a legendary feel.  It’s as if she has taken the greatest ideas from the vampire and werewolf tapestries and unraveled them, then woven them back together so they blend seamlessly.  There are aspects of the story that I really love, classic tropes like the evil nobleman Count Karnstein and the pure, if naïve, young woman named Sarah, doomed and lost to Mercy.  Classic…yes, but Deering’s take on these is unique and enjoyable to read.

Even if the story were mediocre, which it most certainly is not, the art alone would be reason to buy this book.  Christopher Mooneyham and Wesly St. Claire capture the feel of old horror comics and movies.  There are images of vampires that recall Max Schreck’s Count Orlock, as well as completely new takes on bloodsuckers and water beasts.  There is a Mignola-esque feel to some of the shadowing, but that does not detract from the art for me.  Deering has also created a whole new creature in the crow men, which the art brings to life in all of their soul-eating glory.

Rachel Deering has written a story that I’ve wished so many movies could have been.  The idea of pairing vampires and werewolves in a movie is as old as movies themselves, and never very enjoyable.  Even with the advent of CGI and the tremendous leaps in makeup technology, I’ve never really seen a film pairing that I could say worked well. (I’m sure there is at least one out there and that Twitter will supply the film for me.)

So pick up Anathema if you’re looking for a good horror book.  It’s a new take on a classic story, one that works with the common ideas of horror books and gives them enough of a twist to make them seem fresh.