‘Bigfoot: Sword of the Earthman’ has been an immensely epic and unique sword & sci-fi mash-up since the get-go.  The entire run up to this point has followed that lead and run with it, far enough to where the lines between the normally divisive ‘fantasy’ and ‘sci-fi’ genres are so blurred they’ve become their own separate world.  I’m sure there are things of this type in some form out there, and writer/creator Josh Henaman has listed and spoke about them himself and how they’ve inspired this series.  The thing is, when it comes to this title there is no distinction.  This world exists on its very own and no book, comic, film, etc. that I’ve experienced has ever done this so perfectly.  That’s what makes this such an important comic.

Great ideas also require great characters, and this comic is full of them.  From our mute hero Bigfoot himself to the varied villains, slaves, civilians and creatures - each one has made a mark on me.  And, as in any great epic, they all have their roles to play.

The issues leading up to this #5 have been full of rolling adventure, evil schemes, fights & captures, and lots and lots of sand.  Within these pages Henaman, with the fantastic art of Andy Taylor and colorist Tamra Bonvillain, have established the large forces working together in a muddled unison to bring ‘the Earthman’ Bigfoot captive to their Lord.  In the first four issues we met and followed this cast as the story has been building to next issue’s final showdown.  Yet, in this run to #6’s upcoming finish, we have had one character who may have played more of a role in the scope of things than our large footed friend.  I’m talking about Castor.  Castor the thief, the swindler, the scribe.  Castor the moneygrubbing ‘companion’, more interested in using Bigfoot for any sort of gain than of helping this lost ‘Earthman’.  But this issue is where Castor gets to take center stage and make some major moves on his own.

Since originally helping/being helped by Bigfoot to escape in the first issue, Castor has done little more than study each new development in hopes of finding a way he could come out with goods or, in some cases, with his very life.  He has been our constant narrator, and it is mostly through his telling and his experiences that has given us the story.  Why?  Because it’s something he’s trying to keep a mental track of for future publication and possibly the riches and fame that might follow.

This issue is probably one of my top favorite so far, and this has been a book I’ve salivated over since the start.  What sets this issue apart is that though we have seen the entire story through Castor’s eyes as explained, #5 is a straight-up Castor adventure.  The narration is a bit more focused and introspective, the scenes and shots of the issue’s story moving appropriately brisk as we come to a slow realization.  Castor has been the trickster the whole time, that much has been established and embellished.  The great reveal in this, though (well, one of them)?  Castor has a strong heart in that Bagworm chest, and not only that nagging feeling that the things he was doing were wrong.  That was a hint, I think, to what was to come.

As I said, the narration here is more introspective, more dramatic in a way that bleeds of sincere feeling.  The mood of this issue is dark, foreboding, and depressive.  Here are Castor and Bigfoot at their worst - Bigfoot tied down awaiting his ultimate judgement while Castor is given the right to leave the encampment and thrive.  But he has a fee to pay for his freedom - spread the story of the great Bigfoot far and wide, warning others that their Lord is not one to be trifled with.  Just as you think he has found the one thing he had been searching out this whole series - freedom, goods, a purpose of sorts - Castor surprises the reader and reveals that true heart he had tried to hide for so long.  He calls Bigfoot his friend in what I can honestly say was such a touching scene it made my eyes water.  This is no exaggeration.  This comic is that powerful, these characters that well defined.

What Henaman, Taylor, and Bonvillain have given us here is a mini-series for the ages.  This is a book that I feel will make larger waves than it already has the more its legend grows (pun intended!).  This is the perfect example of DIY comics bringing just the right people to just the right project and making gold like the Big Two can’t even touch.  This is real storytelling, real art, and this is so evident within the pages.  Every issue has had me clamoring for more, more, more but this time I am almost sad.  I want to see this end - no, I NEED to see this end - but then…what?  All I know is that Brewhouse better be brewin’ up some new Bigfoot, because the world needs him.  Mars needs him.  We need him.  Hell, the comic industry as a whole needs him the most.  With only one more issue after this to go, I am sure going to miss this big and hairy warrior.

You can purchase issues of ‘Bigfoot: Sword of the Earthman’ from Brewhouse Comics here. 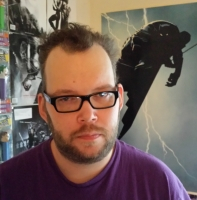