I honestly thought the last issue of Convergence was the strongest chapter so far in the main story; it was far less dependent upon set-up and superfluous exposition, the pace was more energetic and the action sequences were exciting and dynamic, so things are looking up right? Wrong. Issue #4 of Convergence seems to have jumped the track in several new areas. First if we are going to place the blame where it largely belongs we are going to have to address the artwork. Carlo Pagulayan did a fine job on the issues he was responsible for; his art was clean and his storytelling kinetic, however the penciling duties have been given to Stephan Segovia as of last issue, but that’s not the problem, not completely anyway. Segovia’s artwork is solid for the most part, aside from some questionable perspective and staging choices. Where the problem lies is with the unexplainable use of a gaggle of inkers, none of which do Segovia’s line work any justice. The inconsistent styles of inking give the book an overall disjointed feel but that’s not the worst part. Segovia’s facial features lose any emotional impact due to the muddied and heavy handed inking employed by several of this army of inkers. 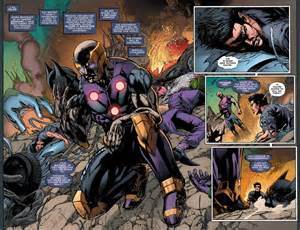 Writer Jeff King fares a bit better. He does an admirable job of fleshing out Telos; King goes a long way to humanize the embodiment of Brainiac’s synthetic world. Dick Grayson takes center stage as Earth 2 Batman is no longer a viable character in the narrative, a hesitate to say dead or gone because we all know that anything is possible at this point. Grayson’s interaction with Telos seems genuine and lends a sense of emotional depth to Telos. His restoration of sorts of Grayson’s legs reads all the more “human” in light of their dialogue. Although Grayson’s driving inspiration is his desire to see his son again, his attempts to break through Telos’ running program and turn him against his master Brainiac become an important part of this issue’s narrative. King’s dialogue here does a nice job of hinting at the compassionate core beneath the sinister exterior of Telos.

The problems I have with King’s writing in this issue are mostly centered on Deimos and his quick change from hero to villain mid-way through the issue. Deimos seems to be here more as a plot device than an actual character; his interaction with the Earth 2 heroes has been little more than as a guide to the hidden city of Skartaris. It is nice to see the Earth 2 characters slowly taking on more effective roles in the main plot, now if we could just see more of the 40 cities that are supposed to make up this world I would have a more optimistic outlook for the next half of this arc. Although Warlord and supporting characters did show up in this issue their inclusion felt utterly unnecessary.

I had higher hopes for the main Convergence book at the half way point and though this issue does have some positives, such as a deeper, more detail portrayal of Telos and the focus being put on Dick Grayson as a main protagonist, there are just too many mis-steps particularly where the visuals are concerned. It’s a classic case of too many inkers spoil the book. I sincerely hope King and company can regain their footing and pick up the pieces for the second half of Convergence. (2.5/5)