“So far…in London, street musician Louise Canton was savaged by a ghostly hound…in Afghanistan she travelled with supernatural soldiers to life the creature’s curse…in the Red Place she’s the captive of the rogue monsters she came to kill.”  That’s issue #1 in a super cool nutshell.

That anyone would doubt Simon Spurrier’s comic book acumen seems silly at this point.  The scribe of comics like Crossed and last year’s The Spire dropped a new book this year, one that pulls you in with he very title.  (For those who haven’t delved into Shakespeare, it’s from Act 3 Scene 1 of Julius Ceaser, “Cry havoc and let slip the dogs of war.”)  Spurrier quotes Conrad and Angelou before the story even begins.

Now Louise is in a pickle, captured by someone who is supposed to be her enemy, and a monster as well.  Spurrier didn’t go into all of the “learn to become a werewolf” stuff that you usually see, he just skipped right ahead into the meat of the story, and I found that a refreshing change to what you usually see in monster comics.  He sprinkles that backstory in as you read through issue 2. 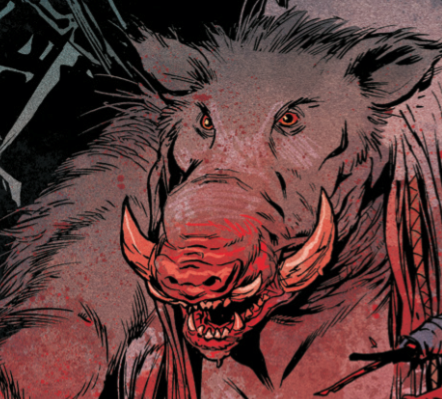 In this issue we get a chance to see the team in action and a little more exploration into the individual powers of group members.  Yes my friends, we’re not just a werewolf strike force, we’re a complete group of assorted mythological monsters!  It’s fantastic!  This whole issue is a flashback, with Louise in a cage, held by the very woman she was sent to get, but we see those important parts that get tossed into a first issue so often, with the changes Louise faced when she became a werewolf, and the way that effected her relationship.  It’s big stuff, and because Spurrier waited till issue two, it seems more important and less glossed over than it could be had it been jammed into the first book.

Spurrier has a great idea here, one that could continue as long as he chooses.  This is a first story arc in which could be a much larger mythology.

Ryan Kelly’s art is, as always, fantastic.  He’s worked on DMZ and Saucer Country and a pile of other books.  I’m always amazed by his line art, the detail he can cram into a page.  There are definitely some artistic challenges when it comes to the monsters that are required by the script, and Kelly shines through in graphic fashion.

Cry Havoc will touch each of your comic nerves.  There’s a little sexy, a whole lot of monster madness, and the kind of tactical maneuvers that would make G.I. Joe envious.  Spurrier sprinkles in quotes from famous writers and propels the script forward with chaotic speed.  Cry Havoc #2 is one more on a long list of books that I will continue to read.