Review: This is the end of an era. Both for Eren and co., as well as my relationship with this title. Now, I won’t be completely dropping the series – though I had heavily considered it – but I’ll no longer be doing chapter reviews for Attack on Titan. Now that we’ve reached a formal “jumping off” point of the story, I’m going to let the chapters build up and do formal volume reviews from here on out. Simply put, while chapter 90 had a few interesting happenings in it, overall the series has become a regular bore for me to keep reading chapter by chapter. I hope that eventually it will become fulfilling for me again if I begin reading it in larger chunks like I used to.

I’m not rage quitting, I’m not even angry with the series. I’m just bored with it. And so… I’m gonna let it sit for awhile and one day I’ll return to it again. Now, let’s get on with the actual review, shall we?

Chapter 89 sees a variety of events happen. Hanji chastises Eren, Armin, and Mikasa for the roles they’ve played up until now. Especially Eren who, let’s face it, needs as little inappropriate discipline as possible right now considering how regretful he fills for everything that’s happened because of his father and the Titans. And in my personal opinion, I understand that Hanji has experienced her fair share of grievances up until now but she’s been experiencing them alongside these 3 recruits so for her attitude towards them to change so much has me completely baffled. 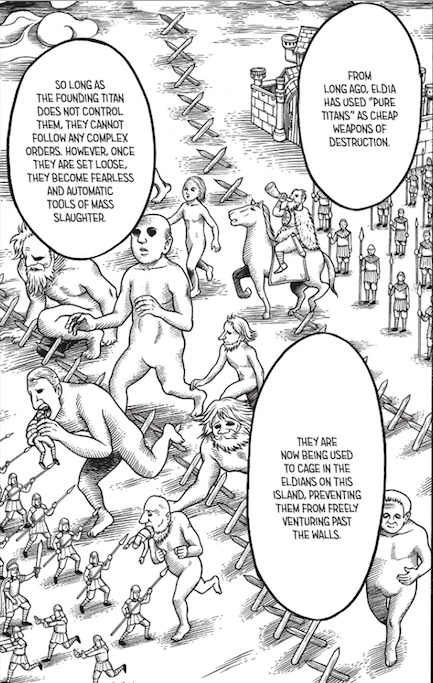 Levi also seems to have regressed as a character. Once a man of both cunning and intellect, he’s now the de facto leader of the Scouting Legion since Erwin died and like Hanji has taken to making these kids feel worse about their decisions than is necessary. Both him and Hanji going so far as to see Eren suddenly speaking about the memories he’s experiencing from his father as him simply going “through a phase” and are refusing to listen to his words. I… can’t even fathom this. At the very least, Levi would have once been the character to take his words at face value.

We also find out that not only is Eren’s Titan known as the Attack Titan, but also apparently it’s the “founding Titan” as well that can seemingly control all Titans. But wait… that’s what the Beast Titan does. Eren’s Titan has never controlled a Titan. Honestly, I’m not even going to discuss this. It honestly makes no sense whatsoever and I would rather not go into a rage trying to figure out Isayama’s logic here.

Historia sits down and reads out a letter written by Ymir detailing Ymir’s romantic feelings for her as well a giving us Ymir’s backstory finally. I can understand why Isayama kept it a secret until now, it involves Ymir being used when she was a child as “the second coming of Ymir,” founder of the Titans, and then when her master – the one her used her – was found out everyone turned on her and she was turned into a Titan to wander the island out heroes rest upon. I do get it. But really, through a letter is kind of lazy, as well the timing just feels very off to me as Ymir as a character hasn’t been very relevant for a while. Now, I have certainly wanted to know her backstory and I’m really glad we finally got it, it was the execution of the knowledge that bothered me.

But then again, execution of revelations in this series is exactly what Isayama has continually failed at doing right for some years now.

Finally, we begin to see a meeting take place that has the Scouting Legion and the upper echelons of military officers attempting to decide what to do with the vast knowledge they’ve gained since the discovery of Eren’s father’s journals. Eren has some more flashbacks and his own memories along with his father’s become melting together. 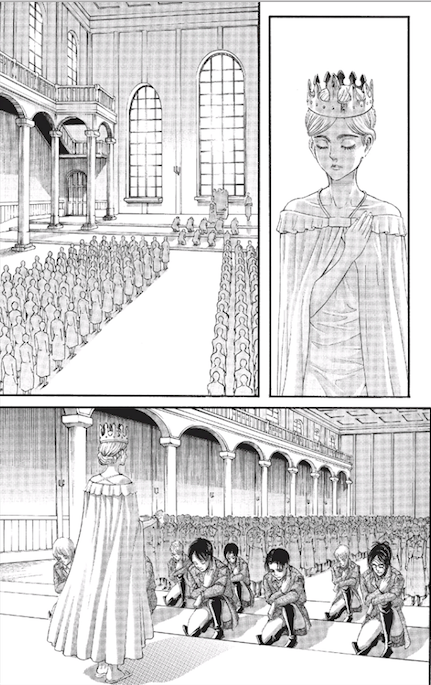 Chapter 90 sees the continuation of that meeting where everyone comes to the conclusion that they will in fact release all this information to the public and so they do. What follows is a series of people reacting either with nonchalance – as you do when you discover that your memory has been stolen – anger, but without rioting, conspiracy theorizing but without propaganda, and some people taking it sadly. But mostly we leave the general populace finding out this massive secret behind to make sure we see the Scouting Legion gaining medals of honor for their valor in taking back Wall Maria.

We also get a scene where one of the foot soldiers yells at Eren, Mikasa, Armin, and Levi for letting Armin live and not Erwin. Again, these kids are getting hell thrown at them for their actions in saving humanity and I honestly do feel bad for them.

Next, we cut to a montage of a year in-story passing by as people begin to repopulate the areas once lost within Wall Maria, and we find out that almost all the Titans that were in Wall Maria were essentially all the Titans on the island. Or at the very least most of them. Well, except no one seems to care that in their last battle the Beast Titan got away, the Armored Titan got away, and I’m pretty sure I remember a few other Titans getting away. What any of them have been doing for a year now is my guess.

But what it all culminates in is the Scouting Legion then being able to scout beyond the walls for the first time in 6 years – pfft, my biggest hate for this series still stems from the idea that 80+ chapters worth of story happened in the span of 3 months after our heroes went through 3 years of training in one short arc. After apparently culling the whole island of Titans, the legion is able to make to the sea where so many people were turned into Titans and sent to eat those hiding behind the walled cities.

Honestly. I am actually really happy to see Armin finally got his chance to see and feel the ocean underneath him as it spreads into the horizon. But knowing how the events of the series have played out up until now in order to get him to this point the scene is soured for me a bit. It’s soured for Eren too as he comes to realize that just beyond the sea there is a mainland where even more enemies, possibly worse than the titans – humans – live and that they must now defeat.

This is where the chapter ends. With a lot of subplots finally coming to an end, and the series reaching what genuinely feels like an “end of part 1.” With “part 2” coming next chapter. Perhaps it will be called Attack on Titan Shippuuden. I kid, I kid.

Ultimately, I feel this a great place for me to jump off the AoT bandwagon and stop doing chapter by chapter reviews. I miss the early days of this series when it was simply a horror/action survival tale of humanity on the brink of decimation and these literally larger than life behemoths known as Titans would come out of nowhere and wreck everything in their path. This was, in my opinion, a far more interesting concept to explore than how these Titans are simply humans injected with a serum and it’s actually another mysterious faction of humans on another continent that are the real enemies.

This is why I’ll continue reading and reviewing Attack on Titan: Before the Fall – although I am several volumes behind on that right now – it was a return to those early days, even for all of its shounen tropes, where Titans were still a mysterious force of nature and humans were still on the verge of extinction trying their very best to just survive. I hope I never fall out of love for that series.

See ya later, Attack on Titan. Until next time.

Final Score: 2 Reluctant Goodbyes out of 5