Summary: Capitola, Moo, and Shar are the halfling ladies of Triptych: supernatural private investigators who get paid to clean up paranormal messes. Normally Cappie doesn’t take human classes, but who can resist a priest, missing Catholic school girls, and a creature that may or may not be the Prince of Darkness? Enjoy Cassandra Jean’s manga adaptation of Nicole Peeler’s hilarious short story originally published by Orbit! [Official Synopsis]

Review: Firstly, I must point out that this has nothing to do with the classic novel of a similar name, Something Wicked This Way Comes, but instead works as a side story within Peeler’s greater novel series Jane True. It focuses on what I assume are some supporting cast members within that series – since I haven’t read any of it. This is a really fun short story however, even if it isn’t technically manga. 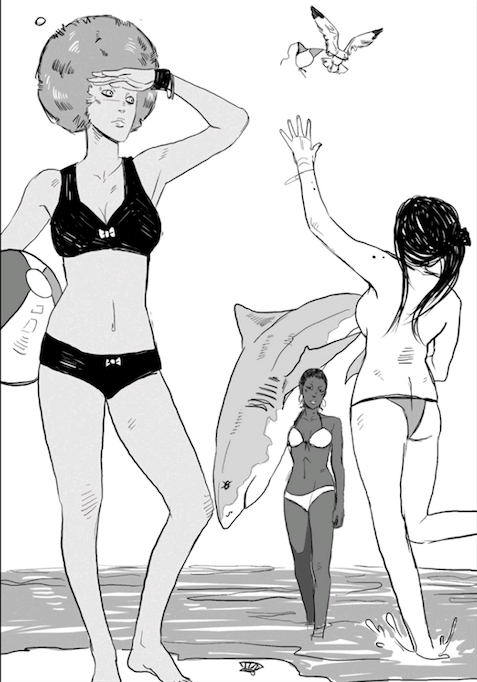 This is actually titled “the manga” even though it’s American made, but really where do you draw the line at what is manga and what is not? Manga are comics all the same in Japan as comics are for us here. Plus Jean does capture some of manga’s well known tropes and utilizes a decent manga style at that to adapt the story. But today we’re not going to get into that discussion, instead let’s actually disuss the story.

Something Wikkid is actually rather short at the full adaptation being around 30-something pages so we really meet the characters and then get thrown straight into the action. The case is short and easily solved, but it’s not like there isn’t any fun to be had along the way. In fact, I’d liken this story to a more adult Scooby-Doo adventure. Or maybe a more adult, supernatural take on Totally Spies, if anyone remembers that cartoon with heavy anime influences.

And by adult, I mean there are a lot of boobs in this and sexual humor. This is definitely not a manga for kids. But it is a fun romp of a story that you can easily read through in a couple of minutes and that’s okay. Honestly, I wish there was more of it, if anything the worst possible thing about this comics is that unless you’re more familiar with the overall world this is set in, you don’t really get to learn a lot about our characters, their quirks, what makes them great, or the world they’re inhabiting. 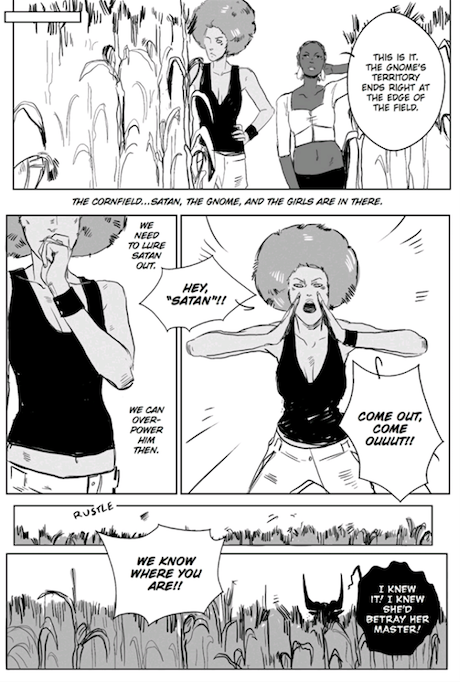 It’s a truly short story with a quick intro, a quick middle and a quick end. In and out. And I want more. I want more damn it! I found the characters fun for what we got of them, and I really like the aforementioned Scooby-Doo nature of the girls trying to figure out the proverbial whodunit, in this case who exactly is spiriting away a bunch of high school girls and are they really the Satan as they claim to be?

I also quite enjoy the art style of the manga. I said earlier that Jean utilizes a decent manga style for the book and that is true, it’s a fine manga style for what we know that to be, but for an all around art style I really, really like it. It’s a sketchy style with broad, thin character designs and a sort of very basic layout that works in focusing on what really matters for the story.

There’s a bunch of supernatural elements to the story that I quite liked. Their villain is Satan – or are they? - and our main team of detectives is made up of a shapeshifter, an alfar (elf), and a succubus. Capitola and Shar, the shapeshifter and succubus respectively, are given the most to do in the story with Capitola’s ability to become invisible and Shar’s ability to attract almost anyone to her being the most useful in this missing person’s case. Moo, the elf, is relegated to a more supporting role which is sad as I would have liked to have gotten to know her more alongside the others.

Something Wikkid really is a fun little story when all is said and done, again I would just like to see it continue. That’s where its potential falls the most short. If you do feel so inclined however, go seek this out and kill a few minutes. You won’t be disappointed.