Summary: In the year 2022, gamers rejoice as Sword Art Online-a VRMMORPG (Virtual Reality Massively Multiplayer Online Role Playing Game) like no other-opens its virtual doors, allowing players to take full advantage of the ultimate in gaming technology: NerveGear, a system that allows users to completely immerse themselves in the game world by manipulating their brain waves to create a wholly realistic gaming experience. But when the game goes live, the elation of the players quickly turns to horror as they discover that, for all its amazing features, SAO is missing one of the most basic functions of any MMORPG-a log-out button. Now trapped in the virtual world of Aincrad, their bodies held captive by NerveGear in the real world, users are issued a chilling ultimatum: conquer all one hundred floors of Aincrad to regain your freedom. But in the warped world of SAO, “game over” means certain death-both virtual and real… [Yen Press]

Review: Sword Art Online has always remained a peculiar title to me. I watched the anime a few years ago and I really enjoyed it, I still really enjoy it, but the whole premise of SAO is that of being trapped in a virtual reality game by the same name. However by the end of this first book that is no longer the case as the very game the series is named after, Sword Art Online, is destroyed.

But before we jump too ahead of ourselves, let’s first take a look at the characters and the story itself. It’s a good thing the characters themselves are quite likeable, or should I say the main character, because without that this story would not be as entertaining. It’s actually not very good when looked at objectively and yet I still find myself enjoying it on some degree that I’m even sure understand fully.

The story focuses 100% on Kirito, a solo player who’s also a duel sword wielder as he navigates his way through this game of literal life and death for 2 years of his life. But we only get to see a little of his life in the game, really, as the first few chapters focus on his character just before the creator of the game traps everyone inside and then skips to 2 years later bypassing most of the build up, grinding surviving, and what not the Kirito must endure. 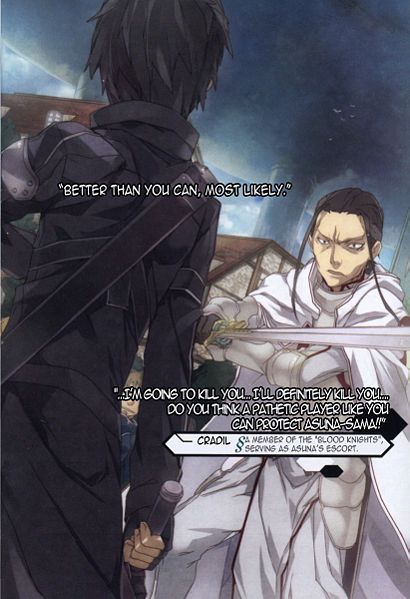 After befriending her the story then turns and focuses more on building their relationship as a couple as they grow to love one another. However, the difficulty with this is that there is a lot of time skips in this first volume so we only get snippets of their life together rather than the full spectrum.

This causes Kirito and Asuna’s relationship to feel a bit more hollow than it should, and I remember I liked their relationship better in the anime because the anime provides extra stories of their time together that this first volume leaves out (those stories are then available in another LN volume I’ll eventually get to).

So two years pass by within the game and the objective is simply thus: to clear the 100 floors of the Castle of Aincrad, the world of which the game takes place. Unfortunately the characters only get to the 75th floor before everything comes crashing down on top of them. We find out that the player Heathcliff, who was the commander of the guild Asuna worked for, was the orchestrator of this whole game in disguise playing beside the players as a way to have more fun.

Although while I seem to be ratting on the story, it’s not that I didn’t entirely dislike it, there was a lot of interesting things about it that I did enjoy, like how players of all kinds were able to make a workable, and living ecosystem out of their time trapped in the game. Ranging from players in guilds and armies, to players running businesses, to characters acting as adventurers, and even characters being thrown in prison by others for violating the games’ rules.

It was all super fascinating that’s why I’m so sad we didn’t get more. The very premise of Sword Art Online could’ve been stretched indefinitely as a single epic story but unfortunately that’s not what we got and that’s why I’m sad. It pains me when stories don’t reach out and take a hold of their potential. Instead deeming to be one thing lesser than what it could – and should – be.

I like Kirito and Asuna as characters, and I’m familiar with where they go from here but I’m excited to see how things play out differently in the light novels compared to the anime. That will definitely be new for me. And if it wasn’t for them, I don’t think I would be excited at all.

Sword Art Online is the quintessential poster boy for failed potential, but it does thankfully have just enough to keep me interested. So you’ll definitely be getting more reviews from me in the future concerning this series. Stay tuned!

Final Score: 2 Fun Characters out of 5