It’s a well known phenomenon that people who are artistic in one sense are often artistic on other fronts as well, that they cannot contain all that creativity with one medium.  That truth is no more evident than in the person of Dan Dougherty, creator of the comic strip Beardo and the comic book Touching Evil.  A talented artist and writer, Dan is also a musician, and with the band On The Off Chance, and is releasing their debut album, White Shoes Black Water, and Kickstarting a vinyl edition.

Dan was good enough to take some time out of his hectic schedule to answer a few questions about music and comics.

-Who are the members of On The Off Chance?

On The Off Chance is

-How long have you been together?

I think it’s been about three years now, although we’ve known each other much longer. Jay and Steve are cousins, Anthony and I have been playing together nearly ten years, and I’ve known Steve and Jay since 99.

-How would you characterize your music? (Genre?)  What are the bands roots in music?

Argh, the dreaded question! Haha, this is a tough one, because individually we each have a lot of artists that have shaped us. I can safely say our music owes a lot to the 60’s and 70’s, both in the style and the recording. When you listen to On The Off Chance, I think the vocal harmony is probably the most striking thing, and that comes from Jay and Steve’s longtime love of Crosby, Stills and Nash. I’ve always been more into singer/songwriters and rock music (I just want Nick Cave and the Chili Peppers to get along)! Anthony’s musical taste is as broad as it is non-intrusive, he’s like a chameleon on the bass.

-As this is your first album, how would you entice someone who doesn’t know the band into checking it out?

You’re about to listen to a band that has a belly full of fire! That’s a hard thing to hold on to considering all the bands and albums we’ve been through individually, but when we play together anything seems possible. And it shows in the songs, I know this doesn’t sound humble but we have an embarrassment of riches in the songwriting department. When we had to decide which songs to shoot videos for, there were six potential singles to argue over! Six out of eleven tracks! That’s a great problem to have. And I dare anyone to listen to the first track of this album and not want to hear more. Okay, I have to calm down now, you have me all worked up! It’s that belly full of fire I was talking about I guess, haha!

-What made you decide to KS a vinyl edition?

We wanted to do something special to celebrate this album, since we spent over a year recording it. CDs and digital downloads are certainly more practical everyday outlets for experiencing music, but vinyl is still the best format to connect listeners with bands on a more personal level. The reason I love vinyl so much is that it’s an experience that commands my attention. You put on a record to listen to the full record, not just the hits. You get to experience the flow from one song to another, and wonder why the band decided to begin and end a side with the songs they chose. It gives you a better look into the thought that was put into this piece of art, and if it’s really good? It can literally change your outlook on life. 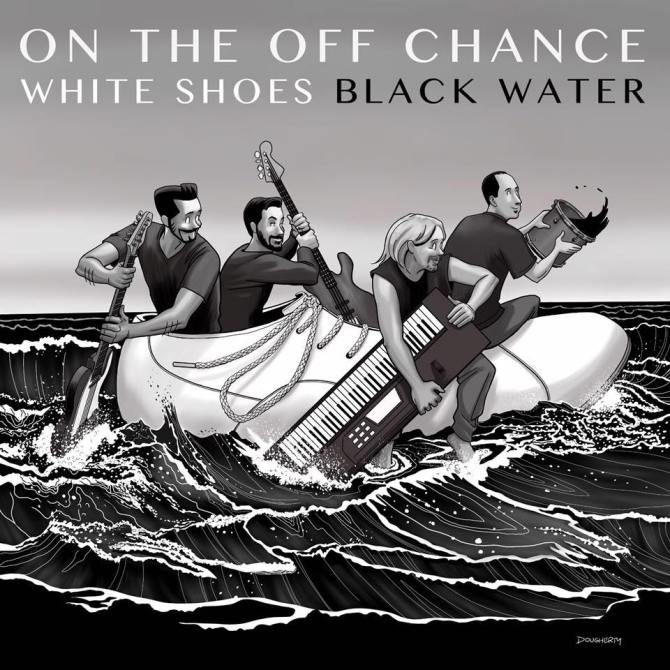 That being said, it’s all crazy expensive too! We crunched the numbers, and figured out a limited quantity that we could reasonably raise funds for. Depending on how many people contribute to this, there might not be many more copies left to sell at shows, so it’s really something that will only be experienced by a select amount of people. And if that entices you as much as it would me, I think that fulfills that “something special” we were aiming for.

-Do you listen to music on vinyl?

I certainly do! I was turned on to it years back by my buddy Garrett, who one day just decided to buy a turntable and a few records and never looked back. His enthusiasm for it was contagious, and now here I am with my modest but ever-growing collection. I try to buy at least one new record a month, and if I ever see a band that I like that is offering it, I make a point of buying that at the show. My 21 month old daughter likes them too, so I try to buy a fair amount of female musicians. And Prince. She loves Prince.

-The videos that are upcoming feature some pretty prominent actors, how did you chance to hook up with the likes of Joel Murray, Jim O’Heir, and David Pasquesi?

On The Off Chance with Joel Murray (Clown)

I’m very fortunate to have some interesting friends. My buddy Mike Sanow runs a production company that is involved in a lot of different entertainment platforms from TV pilots and commercials to live theater. Mike is the kind of guy who seemingly knows everybody, he’s sorta my Kevin Bacon. He’s already been a big help with my comic Touching Evil, but when he heard the album he started talking to me about making some videos. And when he started name-dropping the people he was casting, we were stunned. They all were really down to earth and fun to be around too, and it shows in the videos.

-When will the videos come out?

Director Aric Jackson and his team are in post production as we speak. We are shooting for a spring release, and Mike is hoping to book a good venue to do a premiere at. I’ll definitely be shouting it from the rooftops when I know more, as I’m anxious to see it myself.

-What comic projects are coming up for you?

I just wrapped up Beardo 5, which was somewhat emotional for me as it’s not only the book about becoming a parent, but it was also released on the ten year anniversary of the series and may end up being its swan song. I’m now working hard on the next story arc of my other creation, Touching Evil, so you can expect a lot more evil in 2017. I have a children’s book with DJ Corchin in the works too, and a few projects that I can’t talk about just yet but I’m very excited about.

-Do you use any of the tools in music that you do for writing and drawing?  Do the two muscles work together, or do they work at cross purposes?

I used to say that when I was experiencing writer’s block in one area, I would move to the other. These days, I’ve had plenty of things to keep me inspired between raising my daughter, teaching at the International School of Comics where I’m surrounded by talent, and touring the con circuit with fellow creators. I feel like I’m in a good place to make music and art, my only enemy is time! I never have enough of it to do all the projects I want to do.

-Have you ever considered melding the two genres?  (I.e. writing music for a comic or vice versa?)

Yes, I’d love to write a theme piece for Touching Evil. And I’ve done some comic work before that sorta bridged the two, I contributed two eight page Beardo stories about being in a band to a comic series called Bandthology a few years back. And DJ and I did a children’s book called Thunderfeet that had a theme song and voice for each character. I didn’t write the songs, but I did do a couple of goofy voices, which was fun.

-I know Beardo has been ongoing, a decade in the making, do you ever foresee it coming to an end?

For now, it actually is at an end. For the first time ever I’m not making new material after finishing a book. I don’t have plans to start up yet until I figure some things out, but as my wife has rightly pointed out, if we have another kid and they AREN’T in a Beardo book, that kid will hate me!

-What comics or creators do you find most inspiring?

I have a list of recognizable names I could cite, but right now? The most inspiring creators for me right now are my students at the International School of Comics. They’re all talented in their own ways, and being a part of their journey in finding their storytelling voices has certainly provided me with a renewed sense of purpose and excitement in my own work. I hope I’m giving them as much as they’re giving me back, and I’m looking forward to seeing them make it in the wild world of comics.

My thanks to Dan for taking the time, and I also had the chance to check out the first track from the album, Rose Colored Glasses, and found it to be just the kind of think that would motivate me on the treadmill.  Strong guitar line, driving beat, rock and roll vocals, and then a surprising soft piano part in the middle.  It’s the kind of music that keeps you guessing, and is easily re-listenable.  I can’t wait to see what else On the Off Chance has to offer on this album.

*To check out Dan’s comic work go to http://www.beardocomics.com

*To donate to the Kickstarter for a vinyl edition of White Shoes Black Water, go to https://www.kickstarter.com/projects/522440557/on-the-off-chance-debut-album-on-vinyl