Summary: The signs were there, if anyone had read them. By the time they noticed, it was too late.

It began on the cusp of the twenty-first century. An unknown disease appeared from deep inside Eurasia, then spread uncontrollably until it decimated the continent.

Infection caused distortions of the body, accompanied by consuming hallucinations and death. Nothing could halt the plagues advance. Nations collapsed in its wake, leaving swarms of refugees pouring out of the culminated areas. Almost at once, the developed nations sealed their borders. Refugees armed themselves, which triggered battles and mass killings carried out in the name of purification…

In a final, desperate bid for survival, a cordon sanitaire was imposed around the infected zones, creating what would later be called the Great Quarantine of Eurasia. A new Dark Ages had descended. Inside the quarantine, people succumbed to hopelessness and despair. Outside, civilization began its slow decline.

With no end in sight, the disease was accorded an almost mystical reverence. It was called Seraphim – the Angel Plague. [From inside the book]

Review: Mamoru Oshii and Satoshi Kon worked on a manga together, need I say more? If you don’t know who those two men are, however, let me just give you a few well-known examples of their work. Mamoru Oshii is best known for Directing the classic film Ghost in the Shell as well as Angel’s Egg among several others. Satoshi Kon Directed Perfect Blue, as well as Millennium Actress, Tokyo Godfathers and Paprika. 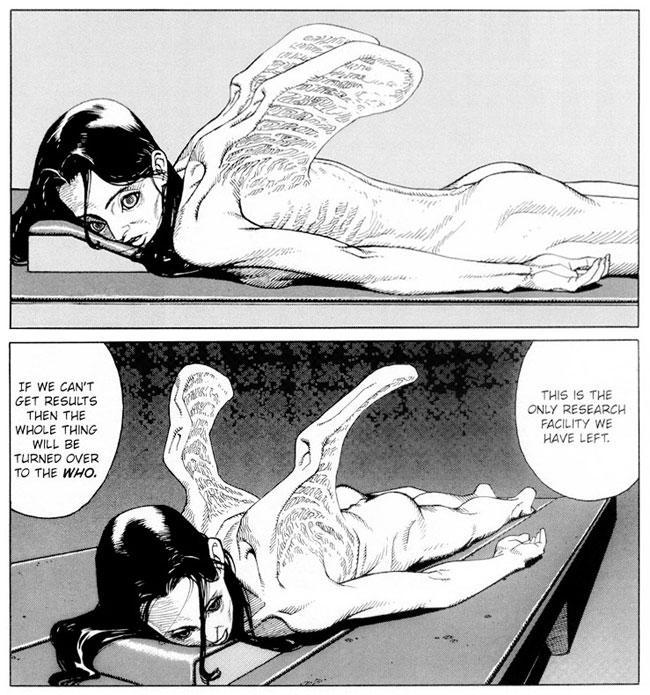 In short, these are two very powerful men in the anime industry and once upon a time ago they worked on manga as well. Serpahim 266613336 Wings is an unfinished series the two worked on together and ultimately left hanging in the middle of the story. I have read that Oshii later wrote a prequel short prose and I hope to one day read that, but for now let’s discuss this series.

Seraphim is set in a world wrought by devastation brought upon by a disease of the same name. The WHO (World Health Organization) has tremendous power in this world and depend on 3 guides – called Balthazar, Melchior and Caspar – to guide a young girl named Sera into the heart of Eurasia. A large part of the world that’s been under massive quarantine for years because of the disease.

Balthazar is an old man with a heart condition with old ties to WHO and also knows the secret of Sera and why this girl is so important to saving mankind. Melchior is a business man who once had severe amounts of power to bring down countries politically and is infamous for it. He’s long since left that life behind and now attempts to find a way to raise countries up. And Caspar is a dog, a Basset Hound to be precise. Unfortunately we never learn much about Caspar or why he’s a dog, only that we see throughout the story that’s he kind of superhuman in a way.

The 16 chapters we get from Oshii and Kon are short but filled with political intrigue, action and tons of revelations as well introductions to further questions. It begs the question of how long did these guys plan for Serpahim to go on? My guess is that if we had gotten the full series it would’ve received somewhere close to 50 chapters and then done.

Regardless, Seraphim utilizes angelic and christian imagery to explore its story and main questions of faith, humanity and the nature of our existence. What makes us who we are and is there a sort of next evolution awaiting us? Christian imagery, or all the good and bad Christian history has been mad up of, it filled with all manners of strong ideas and questions ripe for exploring. Both Oshii and Kon made it staples in their works to use religion as the backbone of many of their stories. Picking and choosing what would make for the more intelligent story and design.

Oshii’s storytelling skills prove to be incredibly strong with Seraphim as the story movies at a cinematic pace. Especially in the beginning where much of the story is less about the dialogue but invoking cool imagery. This is all further backed by Kon’s incredible artwork. Highly detailed, both men approach this story like a movie and it really shows. Now, I’ve also read that Kon gets more involved in the actual storytelling as the story goes on and that probably is why there is such a tonal shift towards the end of the book as more characters get involved and more action is introduced into the story.

The first half of the book is very slow and nearly silent with bigger emphasis on capturing moments with subtlety rather than outright telling us with dialogue. While later in the story, we’re not “told what’s going on” through dialogue thankfully however there’s much more action, much more dialogue and the action is very quickly paced. Chapters involving coup’s and battles barely lasting a few chapters. It is a bit jarring with how quickly the pace picks up and that may have been thanks to Kon’s interference.

The world of  Seraphim is bleak and shrouded in just as much mystery as the disease our heroes are trying to stop. This is a fully realized world with a detailed history that follows out own timeline until the introduction of Seraphim into the world. That’s when things branch off and this becomes an alternate history for our world. We get plenty of history exposition near the middle of the series that tells all we need to know about the state of the world and how dangerous a path our heroes will have. However the exposition feels necessary and never shoehorned in because our heroes know just as little about the current state of the Eurasian Quarantine as us readers do.

Going back to the Magi (that’s what Balthazar, Melchior and Caspar are collectively referred to as) they all feel very real. With the exception of the enigmatic Caspar and Sera, both of whom we never get to truly focus on in this book, both Melchior and Balthazar are given a ton of character development. Especially Melchior or who unwittingly becomes our main character. Whether that was meant to happen or not.

They both have incredibly differing viewpoints on WHO and Seraphim as well as how to approach stopping it. Nevertheless they’re forced to work together and seeing them come together as a team – or forming at least the very basis of a team learning to trust one another – makes these 16 chapters a fantastic journey just for that.

I really tried not to spoil anything about this book for you, the reader, as I hope my words are enough to entice you to go out and read this book. True, the book is unfinished and will definitely leave you wanting more. But whereas Oshii has truly abandoned the project after 20 years of doing nothing with it, and with Kon’s unfortunate passing in 2010 obviously adding to that, what we were left with is worth appreciating and experiencing nonetheless.

It’s not made with the aesthetic of pleasing everyone. Kon’s artwork is very much rooted in realism rather than stylized fantasy, and Oshii’s story is rooted in genuine history rather than creating a complete fantasy world, but that’s all okay. I’m not at all going to sit here and say that this was made for those with higher quality taste. Hell, I appreciate this series and as well I appreciate Monster Musume. Two very different stories for two completely different reasons.

But to read Seraphim you will need to leave your love for ecchi, fantasy action, and standard big anime eyes behind as those are very much not what this story is. If you can do that, then what awaits you is a grand journey that in 16 short chapters will manage to carry you through a whirlwind look into human nature. And perhaps even, a look into what disease can do to us as a civilization if we don’t treat them and ourselves with care.