Review: Man, this series is so good. Now, don’t get me wrong, the LMD main storyline is still running in the background and still lackluster for what it is; it just hasn’t been a fulfilling arc so far. I can only hope it will finish out phenomenally. That all being said, all the other character drama playing out around it has been stellar. And this episode was no exception, going in all sorts of directions that I didn’t even consider it would.

Let’s start with the big one. Of course AIDA wasn’t modified to be uniquely her, she was modeled after someone else. Someone still alive and walking around. My mind was thoroughly blown by this revelation because I just never thought about it and yet it makes perfect sense. A woman from Radcliffe’s past whom we discover is suffering from an inoperable brain tumor is merely attempting to live out the rest of her life in peace when Coulson and Mack show up in hopes that she’ll help them find Radcliffe.

I liked this subplot a lot because Agnes, the woman whom AIDA was modeled after, feels very real and also incredibly sympathetic. We get to see the actress who’s been portraying AIDA really get to act emotionally and humanistically for the first time on the show and she absolutely kills it. It will be very interesting to see how AIDA’s story plays out going forward after she finds out, thanks to Radcliffe, that she was never truly unique and that she herself really is an LMD. A copy.

I do feel bad for both AIDA and Agnes in that regard, Agnes never asked to have a copy of herself created and AIDA went this long thinking she was at the very least an original creation and not a copy like May’s LMD. We also get some really good character work with Coulson and his drive to find May. At one point it did look like he was going to cross a sort of cliché line in order to find her, I’m very happy that was subverted so that he could act logically like a normal human being.

Radcliffe’s storyline is really interesting this episode as well. We saw a first model of it a few episodes ago back in the episode “Wake Up” and in this episode we get to see a small portion of the doctor’s nw great achievement: the Framework. A digital copy of the world where one’s consciousness may live on forever after their body has given up.

I’m not exactly sure if the Framework is actually based off of anything from the comics, however it does feel an awful lot like The World which is a compact, version version of the world that is essentially the same thing in some respects. Either way it’s a cool idea and I’m incredibly interested to see where it goes from here. More fascinatingly how it’s going to effect May when she comes back to reality. 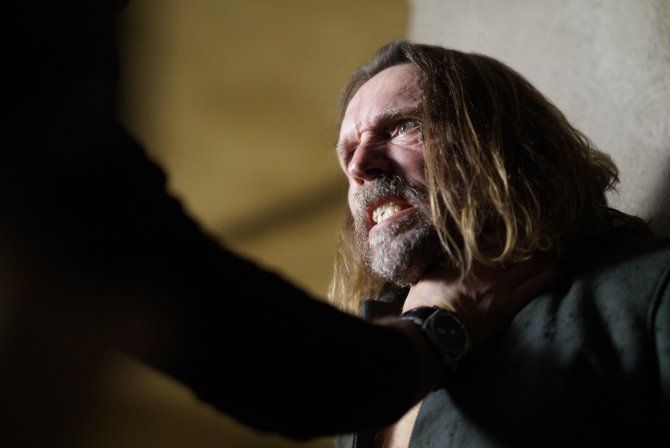 Finally, there’s all the Inhuman stuff that happened this episode, and man was there a lot that happened. I’m honestly surprised with how much was able to be placed in this episode and it feel as well-paced as it did. Though this particular storyline ends on a cliffhanger. In an incredibly shocking twist, Senator Nadeer is killed in an explosion when one of the Superior’s men, whom we’ve see more often as a right-hand man sort of figure this season, attempts to out the Senator as an Inhuman using Terrigen that  Radcliffe supposedly had on hand.

When the Terrigen is scattered in her office the Superior’s thug is the one who turns in to an Inhuman and explodes killing the Senator. However, a quick note of continuity” I feel like Nadeer should have started dying from the powered Terrigen if she wasn’t going to turn into an Inhuman herself because that stuff is supposed to be lethal to humans. It always has been in the past. I know it’s more dramatic to have her die in a fire, but logically she should’ve been choking to death at the very least when the explosion went off. That little bit of a continuity error did bother me.

So, who is this new Inhuman? Terrence Shockley, the Superior’s right-hand man ends up with combustible powers similar to those of Nitro in the comics. This is a fun way to introduce that character without stepping on FOX’s mutant rights, but essentially the man cause himself to explode and then regrow back his entire self being.

I really like how they incorporated him into the story and allowed for SHIELD to get some much needed field action against the Russians who’ve been seeking to undermine the Inhumans along with Nadeer. On top of all of this however, we also got a really nice Mace subplot as he attempts to find his new place in a SHIELD that not only knows his secret, but is attempting to take some of the burden off of him as Director. See, I told you there was a lot going on this chapter.

I’m really loving Mace more and more as he seems to genuinely want to do the right thing and help wherever he can. We get a lot of him really trying to find a place to fit in as Coulson’s team kind of starts to take over the organization again, whether they really meant to or not. He also gets the bad news that the injections he’s been taking to gain super strength is in a way killing him. Each does he takes become more lethal than the last and any one of the next ones he takes could kill him.

This is super fascinating and holds a lot more weight when at the end of the episode he decides to take an injection anyways in order to combat the Russians. Even if it does prove a bit fruitless in the end after he’s simply out-manned. Again, Mace is turning into another great tragic figure for this series and I really, really hope he makes it to season 5. If we even get a season 5. He’s been a great addition so far.

“BOOM” despite the hokey but effective episode title is a great addition to the Agents of SHIELD mythos and I look forward to what comes next. But I will say it again until the heavens finally hear me: this main LMD story arc, ya know where people get replaced and you don’t know who to trust? Yeah, that needs to pick up the pace and quickly. We’ll see what happens next episode. For now, there’s always next episode.