Art and Colors by Alex Cormack

Glasgow, largest city in Scotland, third largest in the UK, and home to a bustling nightlife.  And there are bars and clubs as well.  In John Lees latest comic, Sink, from Comix Tribe, there is a distinct difference from what you envision.

It begins with Allen and his friends at a club talking about what a real Glaswegian is, what the city has been and has become.  They leave the club in high spirits, just in time for Allen to miss the last bus home, and force him to walk the streets of the city to get to his cozy abode. 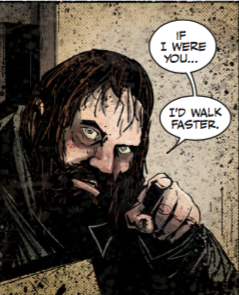 If you’ve not read a Lees book before then you’ll be in the dark here, though the dark is not the worst place to be in this Glasgow.  Lees, whose And Then Emily Was Gone and Oxymoron delve into the darkest parts of people and monsters, quickly finds his center in this book as well as Allen stumbles upon a gang prowling the shadows.  Wearing condoms as beanies, the dickheads chase Allen along the hidden side streets until he’s cornered with the lot of them.  All seems lost until a man wearing a fox mask and calling himself Mr. Dig shows up and takes beats them all with a shovel.  Mr. Dig is a “real” Glaswegian, not like Allen who is from the suburbs, and upbraids the young man before sending him on his way with a warning, “don’t stray from the path and don’t stop for anything.”  This being a Lees book, you don’t expect a traditionally happy ending, but it is a happy ending of a sort.

Lees hits his stride early with this book, and pushes you through despite your trepidation.  At some points you don’t want to continue reading, but as with all great horror writing you can’t help yourself, and on you go.  He builds great tension and keeps the strings humming as you move through the story, and although you suspect it won’t end well, when it ends, it seems the best possible closure.

Alex Cormack (Oxymoron, Find) has sufficiently gritty artwork to show the dark side of Glasgow, and draws the gore and violence at the core of this book.  His coloring work really sets the art apart, with the darkness of the setting and vivid blood striking a great balance.

Sink gives you a great horror story with some classic roots.  I got a distinctly Clockwork Orange vibe when seeing the dickheads for the first time but later on Lees and Cormack really change that feeling with the addition of other characters.

If you love horror stories and comics, then go no further than a John Lees book.  His work continues to impress.  Go out and buy it droogs.

And if you’d like to see more of John Lees, check out the Kickstarter for the Sink: Welcome to Glasgow World Tour.