“The Man Behind the Shield”

Review: This was a really interesting episode and it finally did one of the things I’ve been wanting the show to do since the LMD arc began. Although not in a completely direct way. With it being, presumably, the penultimate episode to the LMD arc things pick up real quick this time around in a way that felt confusing on some fronts but also managed to make the arc a lot more interesting to watch than it has in its previous five episodes.

The Man Behind the Shield sees the main cast get together to take down the Superior after they discover his location in a bid to save both Mace and May. We get a lot of flashbacks this episode as well to the mission that would eventually bring Coulson and the Superior face-to-face. A mission in Russia that saw Coulson and May retrieve an 0-8-4 (SHEILD’s codename for unidentified objects) that also led to the death of many of the Superior’s friends.

Let’s talk about the flashback first and get it out of the way. Fans have wondered for years if Coulson and  May would ever get together romantically and personally I’ve been okay with letting them just be best friends. However, even friends can become more than that if given enough time and enough chemistry. What we find out is that these two have had sexual tension for one another since before May met Andrew and in fact her budding relationship with him does get referenced at the end of this episode.

This also explains the sudden bottle subplot that was introduced several episodes ago where both Coulson and May discuss having waited long enough to have a drink together. Personally, I felt uncomfortable finding out that they’ve had these feelings for one another all throughout her time with Andrew as I feel that may undercut her feelings for him, or at least his character as a whole. But I do give both of them credit for never jumping on those feelings until well, well after May was over her marriage with Andrew and her grievances of him dying last year. Besides, it’s also LMD May that started moving forward with the relationship… perhaps the real May wouldn’t have? I guess we’ll eventually find out.

The rest of the episode however is an attempt to get Mace and May back, find Radcliffe, and defeat the Superior. They do succeed in getting Mace back, and they even end up defeating the Superior. However the show does continue to do one thing that I feel it really needs to work on: When Daisy takes down the Superior she simply leaves him laying in rubble rather than doing her job as an governmental agent and arresting him while he’s unconscious. 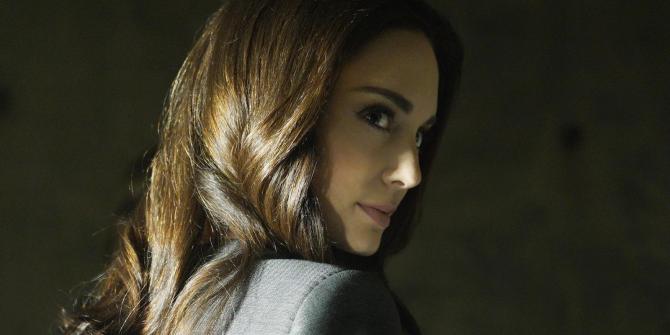 The only justification I can find in this oversight is what’s revealed at the end of the episode but we’ll get to that. Coulson and the Superior have a very fun conversation when they do finally meet. It makes sense that Coulson would have very little memory of the mission from when he was much younger and it goes to show that even if you’re a big bad seeking revenge even you can be just a blip on someone’s radar when they have far more important things going on in there life. However, the Superior also shows us that even those who are merely a blip in a grander plan can become big given enough time and planning.

Never underestimate someone who’s out for blood, so to speak.

We also get quite a bit of pop culture references in this episode again. I don’t know how to feel about them, really. I love a good pop culture reference just like anyone else who watches these types of shows but I think it’s the shoehorned feel in which most of the characters deliver when saying them that throws me off. Like, the dialogue doesn’t sound right coming out of these particular character’s mouths I guess. Regardless, at least I understood them. So there was definitely some enjoyment in that.

Fitz and Simmons get quite a bit to do this episode as they attempt to discover where the origin of Radcliffe’s version of the Framework is coming from. Because the Darkhold has given Radcliffe and AIDA power beyond measure they’re able to hide the Framework from being discovered by pinging it’s location from several millions of devices at a time without anyone knowing it. A hacker’s worst nightmare so to speak.

At the end of the episode the LMD detection scanner FitzSimmons had placed within HQ goes off and they discover that Mack, Daisy, Mace, and Coulson were all at various points switched out with LMDs during their time on the base. Whether either Fitz or Simmons got out unscathed as well is to be seen, as its entirely possible either one of them would have the nohow to get in undetected by the scanners. But this is where things get exciting because we’re finally getting a true LMD invasion with much of the cast now switched with android versions of themselves and only a few people, literally, knowing about it.

Though FitzSimmons does know about these LMDs, I am on the edge of my seat to see if either of them got switched out as well. That mystery has me very excited. Knowing Daisy has been switched out with an LMD of herself however is my justification for her oversight into not arresting the Superior when she had the chance. Whether or not that’s it however is to be seen.

With this being the penultimate episode of the arc however, there is A LOT of ground to cover in the next episode and I really hope it closes nice and tight rather than abruptly and clumsily. I know we have a whole 3rd arc coming later in the year for the season, but for this one to succeed a lot of the threads its been dangling need to be tied up. Don’t leave us hanging, AoS!

I can’t wait for the next episode.

Final Score: 3.5 LMD Versions of our Main Characters out of 5