Summary: A Bride’s Story tells the tale of a beautiful young bride in nineteenth-century Asia. At the age of twenty, Amir is sent to a neighboring town to be wed. But her surprise at learning her new husband, Karluk, is eight years younger than her is quickly replaced by a deep affection for the boy and his family. Though she hails from just beyond the mountains, Amir’s clan had very different customs, foods, and clothes from what Karluk is used to. As the two of them learn more about each other through their day-to-day lives, the bond of respect and love grows stronger. [YEN Press]

Review: This was a fascinating volume that when in a direction I really wasn’t expecting it to. After Mr. Smith left at the end of the previous volume I suspected that we weren’t going to see him again for a very long time and that his journey would be something explored at a later date. That was most certainly not the case. This entire volume focused almost exclusively on Smith’s journey to a small town to meet up with his guide only to be mixed up in a love story that really took everyone, including myself, by surprise. 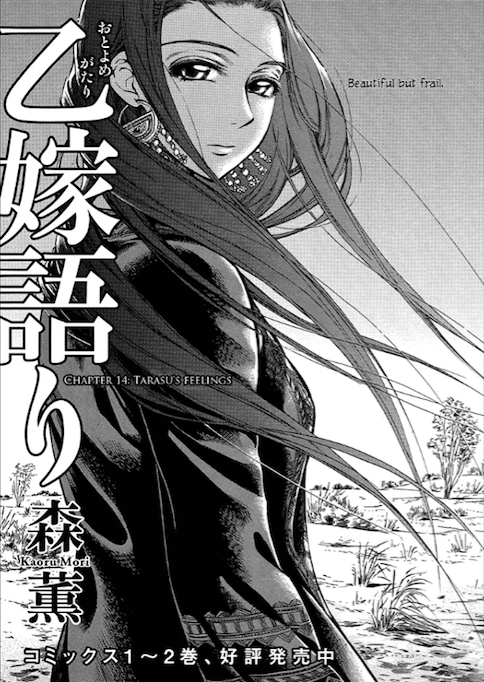 Early on Smith’s luggage and horse are stolen alongside a beautiful young girl’s. Her name is Tarasu and she’s been through a helluva time. Losing all of her husbands in succession along with her own father and and father-in-law leaving only her and her mother-in-law to live alone in a small hut outside of town. At this point I wondered if there was going to be a reveal that Tarasu had killed all of her husbands – they were brothers she ended up having to marry in succession after the previous one died – but no, she’s just an innocent girl was dealt a harsh blow in life and now she can’t find a man to take her.

She befriends Smith after they get their luggage taken away and becomes quite smitten with him. Leading to her mother-in-law to suggest Smith take Tarasu in marriage and then take her to whichever location he’s seeking. Obviously, this creates conflict with Smith and leads to an incredibly deep story of human emotion and circumstances that we often find ourselves wrapped in and never in a million years would we picture ourselves being wrapped up in. Smith was most definitely not looking for a wife, and I love how Mori effortlessly explored Smith’s internal conflict with whether or not marrying someone you just met and don’t necessarily love is the right thing to do versus leaving her to fend for herself essentially and hoping someone good happens?

Unfortunately, Smith tries to flee the hut back to town and is arrested by the local, Russian-themed police. However, I don’t think they were Russian, based off of suspicion for the way he looks. This leads to a fun cameo for a few chapters from our lead duo of the story: the titular bride Amir and her kid husband Karluk. As they come to save him. 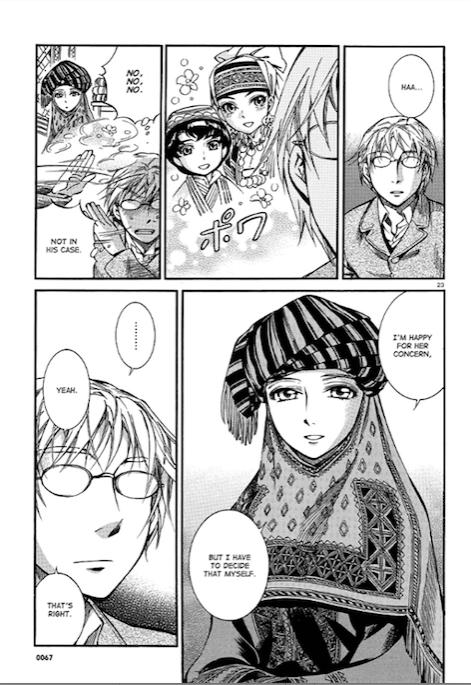 Now, shifting away from Amir and Karluk for a story in order to focus on a side character was very smart in offering up a breath of fresh air for us as readers, but also it helped serve to expand this world we’re reading about that is trying so hard to emulate our own. In fact, Tarasu’ plotline is still focusing on the very title of the series itself and theme: A Bride’s Story. And though her narrative has to be dropped by the end of this volume it was still nice to see that Amir isn’t the only bride of importance in this series.

Unfortunately, my heart broke when Tarasu and Smith finally agree to marriage, only to have that dream violently ripped away from them when Tarasu’s mother-in-law has to abruptly remarry herself in order to save their dwindling home life and Tarasu’s new father-in-law ends up hating Smith. To the point of threatening Smith with a gun so that he will leave their family alone and never return.

What I have enjoyed so much about this series so far is its characters, and the portrayal of the obstacles they face in these stories as good representations of real life in this time period as well just the cultural and social injustices of it all. In fact there’s a conversation Smith has with the various other characters in this volume about whether or not Tarasu should, as a woman, know her place and listen to her father or rather listen to her heart instead.

While the whole conversation comes off as very anti-women choice that’s not really what Mori seems to be going for. Instead opting to truthfully portray what life was like for women in this time – having their basic rights and choices stripped away by men, something women are still dealing with to this day – and how that ultimately effects the women themselves as well the men whom want to help, but ultimately are barred from doing so.

A Bride’s Story is a great series one of the more relaxing ones I read. While the themes can get heavy they’re always wrapped in little, personal stories with great stretches of stuff happening but slowly and more calmly. Instead of opting for grand scale narratives that span hundreds of chapters and are filled to the brim with action. I cannot wait to continue reading and to see what Mori chooses to focus on next.

I also would like to briefly point out the 4-panel gag comics that were added to this volume focusing on Pariya and her heavily hinted at lesbianism – or as is possibly hinted at in this volume, bisexuality – that these were treats. It didn’t focus on her sexuality, it just focused on the funny situations she finds herself in due to her personality. One of which is the discussion of marriage and her perceived insistence to herself that one day, one day, her and Amir shall finally be together. I loved it. I can’t wait for more of these little adventures either.

Final Score: 5 Dead Brothers out of 5