Summary: Yamada wakes up on an uninhabited island after falling off the cruise ship his class was on in the middle of the ocean during a thick fog. Alone, he begins building a raft and finding ways to survive until he discovers a female classmate has washed ashore as well. The two learn to survive together until one of their teachers washes ashore and generates animosity between the three of them. After nearly two weeks of living on this island Yamada is swept up by a fog only to regain consciousness while being rescued in the middle of the ocean 15 minutes after he had originally fallen overboard. What is this new reality Yamada finds himself in? No one believes him about the island he stayed upon with his classmate Imaise Chika and their teacher Shibata. But when Shibata shows up unscathed and with no memories of what happened it’s now up to Yamada to discover the truth for himself and find the missing Imaise.

Review: All the chapters in this series have been relatively short, on average being around 12-16 pages. Well, both of these chapters were both 12 and 16 pages respectively and both felt extremely short in that truly not a lot happened in either one. So all in all this will probably be a pretty short review compared to past reviews.

Chapter 52 picked us up right where we left off with Yamada, Imaise, and Nori dealing with the fact that the island they’ve spent so much time on is now sinking. But rather than simply sat on a life raft and watch the island sink the chapter instead focuses on Nori’s attempt to save Yamada’s survival duffel bag from sinking into the bottom of the ocean. Like Yamada says, it’s got some stuff in there that would help them survive a bit longer, but it’s nothing to risk your life over.

And indeed Nori nearly drowns and Yamada ends up having to save her anyways. What comes of it is that we find out that inside the bag was the thermos that allowed Nori to have an “indirect kiss” with Yamada at one point in the series. I honestly forgot when this took place. An indirect kiss, by the way, is when you touch something to your mouth – most often a drink of some kind – and eventually someone else not long after touches the same thing to their mouth. See, an indirect kiss. 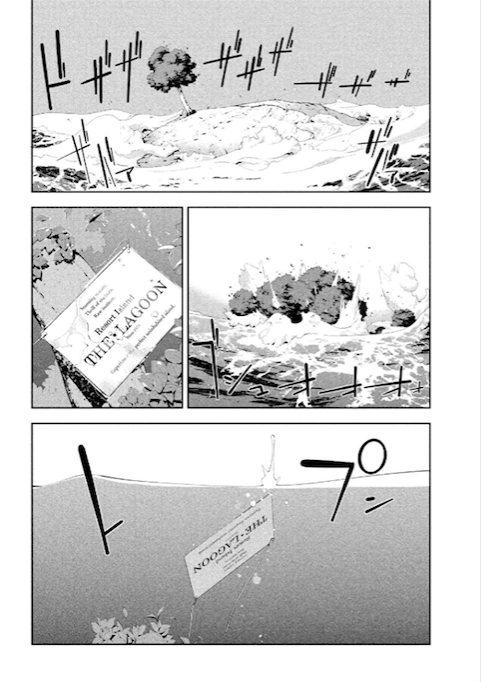 Nori is so hellbent on getting some kind of attachment out of Yamada that she risks her life for a thermos and then ends up asking him afterwards if they can have another later using something else. This is something that I do and do not like about both Nori and Imaise. They’re incredibly strong female characters with tons of character growth – something we’ll discuss again in a moment – and layers to themselves as fully fleshed out people.

However, while the whole focus on their mutual devotions to this one man have called for some great chapters in the past this one really isn’t one of them and makes Nori come off as sort of childish and naïve. When you attempt to apply narrative logic to something you often run the risk of forcing your own perceived “this is what I would do in this situation” onto a character who for all intents and purposes doesn’t think like you. One, they’re not real, and two, they have to make their own decisions. Often logical or not. As long as it doesn’t feel out of place in the story.

This does feel out of place as I feel Nori would be smart enough to let the bag go especially if she wants another indirect kiss from something else other than the thermos later, and without trying to run the risk of applying too much narrative logic to Nori’s decisions, if I were in that situation you can believe that the bag would go so that we could live. As it was irresponsible of Nori to make Yamada end up coming to save her anyways, which could have resulted in both of them dying.

In chapter 53, this was a slightly longer chapter and sees – mostly – Imaise and Nori hanging out in the hot spring as they attempt to dry off from their skirmishes at sear last chapter. Turns out only half the island sunk this time leaving the other half barely hanging on. And the hot spring from several chapters ago was one of the survivors. 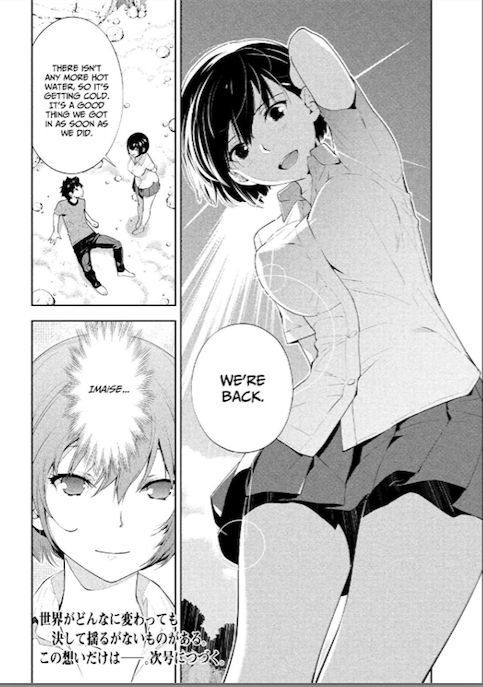 As the girls are getting undressed they make a play for Yamada to join them in the hot spring, and Imaise even surprised the lot of them by recognizing that Yamada needs to relax too and allows him to join them. It’s Yamada however who turns the girls down so that he can focus on figuring out a way to keep them alive as he finds a new place for them to camp. It’s a fun little exchange and also shows how much Yamada has come in 50 odd chapters.

Something Imaise picks up on when, in the hot spring, she discusses with Imaise that what she’s seen in Yamada recently is true character growth and that he’s not the man she once perceived him to be. Along with that, meeting future Yamada – whom I can only suspect is still on the island somewhere – showed her that she herself needs to work on growing as a person and becoming more accepting of people and their choices so that she too can become more accepting of herself and her choices.

I love this moment for her as it shows so much maturity in Imaise whom I remember once complaining that I was afraid Okazaki was going to regress her characters. Hopefully from this point on we won’t have anymore out of place tsundere outbreaks from her. I also hope Nori takes this as a sign to start acting a bit more mature herself. Not everyone can be the same, of course, but I also just don’t want any repeats like her actions in the previous chapter.

So this review ended up being a bit longer than I had anticipated. I had a lot more to say than I imagined I would. That all being said, this series is still grade A in my book and I still highly recommend all you reading this to check it out if you haven’t already. Seriously, it’s good stuff.