“I dropped acid at the Sagrada Familia, which was a trip to say the least.” - Victor Johnson, The Rules of Attraction

Cosmic Scoundrels #1 is a wheels-off space adventure that has no real endgame except to infiltrate the serious comic readers mind, and force feed them a tab of comic relief calamity. Thank Mongo Prime for levity in comics. 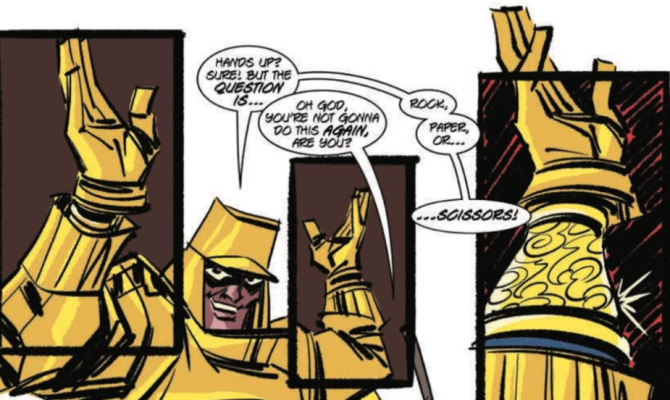 As we begin our story we are introduced to Love Savage and, the “Scissors!” screaming Roshambo. They are two space pirates that are always on the look out for the next job and their next quippy line.

With a precious piece of cargo to be had our two anti-heroes stow away on a ship carrying the booty. They are caught almost right off the bat, but after a few antics and a few Atmosphetamine they escape to their ship, The Fistpuncher. The mysterious cargo is theirs, but for how long?

The story is there, but it is very secondary to the quirky two space pirates, and the off the wall characters that we are introduced to.

Cosmic Scoundrels #1 is part 1 of an arc that hasn’t yet been flushed out, but the thing is I am not going to buy the second issue based on the story. I’ll buy it based on the fun I had diving into the world writer, Matt Chapman (Homestar Runner) and artist, Andy Suriano (Samurai Jack) have created.

Speaking of Suriano, his art is perfect for a book this frazzled by unconventionality. The colors have a cool blunted neon feel. As you look through the book you can almost smell the two day old pizza and sweet greenery of that buddy’s house (you know the one) you crashed on last weekend. Chapman and Suriano created a vibe with this book, and it is real.

Along with the psychedelic bathed world and characters, Chapman and Suriano have filled this first issue with a Where’s Waldo amount of interesting things to riffle through and find gold. World building gold. A lot of information is squeezed in that makes this a very re-readable book where you will find new things every time. 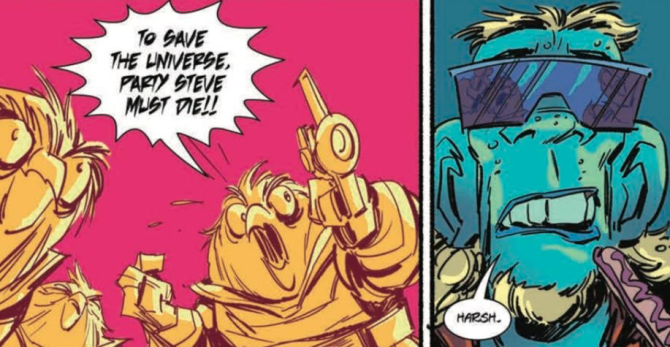 From a guest panel by artist Hank Ketchum to a backup story about Party Steve, who’s party antics have caused a rip in the space time continuum, Cosmic Scoundrels #1 fantastically different.

Every once in a while it is nice to get a book that is “out there” weird. It isn’t trying too hard to be weird, although I might get some push back on that, but it is cool weird with an edge that makes it special.

I really liked a lot about this book and can’t wait to see where it goes. If you are in the mood for a fun, trippy and irreverent jaunt through space then pick up IDW’s Cosmic Scoundrels #1.