RoboCop is one of the quintessential ultra-violent 80’s action movies that a lot of us grew up on.  I quote it about as much as any other movie of its genre.  “Book him…he’s a cop killer.”, and you can’t forget, “The Tigers are playing… (drums the table) tonight! I never miss a game.”

With a deep seeded, nostalgic property like RoboCop, you aren’t going to get a lot of leeway when it comes to pleasing fans.  So when Joshua Williamson (Nailbiter) did right by the silver serviceman himself in, RoboCop: Dead or Alive Vol. 1, the bar was only set higher for Vol. 2.

In, RoboCop: Dead or Alive Vol. 2, Joshua Williamson is back at the pen, or keyboard, or whatever his instrument of choice is, and Carlos Magno (Lantern City) is back on art.  Pretty much the whole team is back, including colorist Marissa Louise, and Ed Dukeshire on letters.

It’s an unusual thing in the comic book industry to be able to keep a creative team together.  It shows in volume 2, and really helps bridge the gap from one arc to the other, keeping everything tight and familiar. 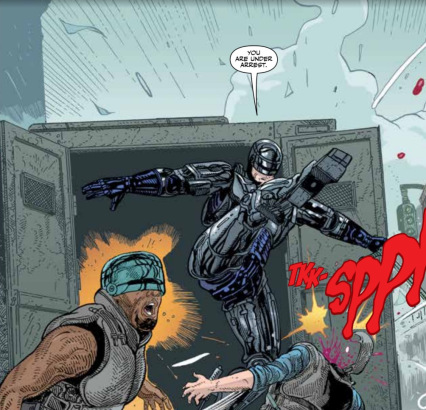 Volume 2 continues the story of RoboCop being out in the field on his own.  And to add to the risk of being out on the mean streets of bloody Detroit, the department has taken away one of the mainstays in the RoboCop lore, his trusty sidearm auto-9.  With no gun, and his partner, Anne Lewis, promoted to an office job, RoboCop is alone to do battle with a crew of bank robbers, and the deadly ED-2000XS.  With Detroit getting worse, partially because of the overbearing restrictions placed on the police force, due in part to the OCP having bought them, and the evil Killian still causing problems, RoboCop and Lewis have to find new ways to get the job done protecting and serving Detroit.

The writing wasn’t anything mind blowing, but it gives the reader something solid to sink their teeth into.  The story was ok, and got steadily better as the drama of the story ramped up.

Funny enough the colors seemed to parallel the writing, both getting better as the story progressed.  The art was consistent, but failed to pop early in the story.  Louise used a lot of earthy tones that didn’t really give the art what it needed.  Although during the flashbacks the coloring was great, showing instantly with the toned down and darker colors a different time. 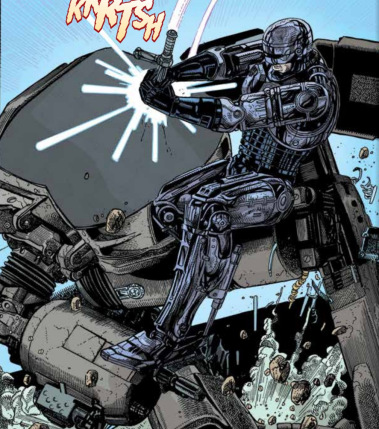 Carlos Magno has a very gritty and detailed style that suites some aspects of the story, but sometimes seemed to fall flat.  Some panels just seemed static.  Overall though, with help from a much improved, richer, color scheme later in the story, I ended leaving the story satisfied with the art.

RoboCop: Dead or Alive Vol. 2 stumbled a bit out of the gate, but quickly recovered in all aspects.  When all is said and done this was definitely something that I enjoyed, and would recommend to a RoboCop or sci-fi fan.  Plus, let’s face it, it’s RoboCop.  And when you have RoboCop, you can’t really turn it down.