Peter Parker has returned! Well, sort of anyway.  It’s not a full-fledged re-establishment of Amazing Spider-Man but it is a five issue mini-series set in the time before Spider-Man became superior, back when he was just amazing and Peter was in the suit as well as the body END_OF_DOCUMENT_TOKEN_TO_BE_REPLACED

Sometimes, all you want from a Spider-Man book is some symbiotes, spider-bots, and subplots. In this issue, Dan Slott and Christos Gage deliver that in spades. After the previous issue’s exposition-heavy script, I’m glad to see many of the story threads move forward. END_OF_DOCUMENT_TOKEN_TO_BE_REPLACED

It can sometimes be difficult to gauge the quality of a story arc from its first issue. If I were to make a list of things I’m sad we didn’t see in the inaugural meeting between Flash Thompson in the Venom identity and his hero, Spider-Man, then those very things could happen in the next issue. END_OF_DOCUMENT_TOKEN_TO_BE_REPLACED

Now that’s more like it! As of late, my complaint with the Superior Spider-Man is that I haven’t felt very much drama in the books. The superhero battles tend to be one-sided in favor of Spider-Ock, and the beats among his supporting cast aren’t given enough room to breathe. END_OF_DOCUMENT_TOKEN_TO_BE_REPLACED

This issue was the most hyped Spider-Man comic since Amazing #700. With most of that hype coming from Dan Slott himself I was eager to read this issue to say the least besides I love this book so much anyway. After reading issue #20 I have to say END_OF_DOCUMENT_TOKEN_TO_BE_REPLACED

Nick Spencer is a force to be reckoned with and he is showing that to the world with Superior Foes of Spider-Man. Armed with a razor sharp wit, deadly dialogue and spot on comedic timing END_OF_DOCUMENT_TOKEN_TO_BE_REPLACED

2ComicNerds are back at it again, and this time it’s a review of the newest issue of “Superior Spider-Man” - #15!  They’ve really been working hard on these videos and I must say this one is one of the most thoughtful reviews they’ve done so far. END_OF_DOCUMENT_TOKEN_TO_BE_REPLACED

Our good pals over at 2ComicNerds have started a new feature with 1/2 of the team - AJ - doing video reviews of some of the comics he gets each week.  The first two installments of this new video series are up, and we’ve got them here to share with you!  Huge thanks to the 2ComicNerds team for allowing us to bring these to you via our site. END_OF_DOCUMENT_TOKEN_TO_BE_REPLACED 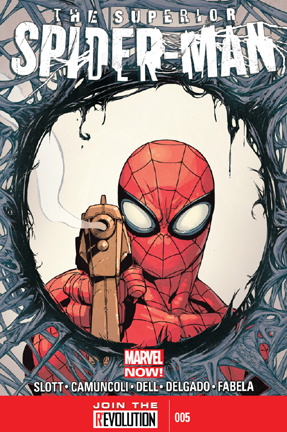 By now, if you haven’t heard of the recent goings on within the Spider-Man titles you’re probably not reading this, since there is a pretty crappy internet connection under a rock, or you don’t care.  I’m going to assume either one of those things are true, or that you’ve read it and know what the deal is.  But, either way, this is more about “Superior Spider-Man” issue #5 than it is the whole debacle that was “Amazing Spider-Man” #700 (which I was personally a huge fan of).  So, let’s look in on this new Otto Octavius Spidey and see how he’s been doing.

An old villain, previously saved from death by the earlier Spider-Man, returns and has one thing on his mind.  His name is Massacre, so I’ll let you guess at that one.  As per his name, he killed a large group of civilians in the previous #4, causing Superior Spidey to decide that he won’t fail as Peter previously had, and will end Massacre’s murder spree “at any cost”.  It makes one wonder how far this Spidey might go.  That question is answered in this most recent issue, #5.

This issue finds Otto continuing with his ‘one step forward, two steps back’ approach to becoming a hero, and - of course - a ‘superior’ one, at that.  Although Otto has been making progress on the ‘real’ Peter’s social life, and even begins to fix his and Mary Jane’s relationship, he still has major flaws that are apparent in his attitude and treatment of what crimes ‘deserve’ his attentions, and which do not.  Where the original Spidey would stop at nothing to take care of any type of problem he came across, Otto passes on some superhero duties with the justification of having already done more than Parker had during his career behind the mask.  This of course drives the still-attached corporeal form of the real Peter Parker nuts, giving him more to nag Otto about.  This ‘nagging’, which began with issue #2 of this title, was at first very annoying and whiny, but has since leveled out well, giving Peter moments to complain as well as giving Otto some inspiration and even compliments at times.  Some things Otto really does do better than Peter had, and he acknowledges this.  Peter actually talks a lot in his ghostly form, which Otto is beginning to notice more and more, it seems.

One of his main problems with filling the shoes of the usually charismatic and friendly Parker is that Otto is constantly talking down to fellow employees and superiors at Horizon Labs, which is creating more suspicion and anger at each turn.  He literally bosses the boss around, treats the whole Lab like a group of morons, and feels no need to change a thing.  He’s Otto, even under the suit and with his changing outlook, so the ‘I’m such a genius’ mindset that has always been a part of Doc Oc’s personality is still there, and most times its his main flaw.  When belittling his superiors at Horizon, he is told that Parker never received his Doctorate, thus making Doc Oc not so much of a ‘Doc’ in Peter’s body.  He feels completely robbed of his Doctor title, which is ironic since the whole reason this has happened is because he basically stole Peter’s body.  So, Otto heads back to school, and is not too happy about having to do so.  This further cements his opinion that Peter was a screw-up and a complete fool.  It’s a little silly of a plot twist, but in this situation it’s the only viable option for him.  His first day in school Otto finds himself bugged numerous times by an unseen woman offering tutoring.  Finally, he gives in and goes to her home, planning to ask her to stop bothering him.  He is surprised to find that she has been ‘waiting for him’ (she tells Otto/Spidey/Parker that he will need her if he’s going to pass a class taught by a Dr. Lamaze), and is what she herself describes as a ‘little person’.  Add in the fact that she is a highly intelligent and quite witty woman and a ‘Science Chef’ (using chemicals and physics to create perfect dishes), and we have the makings of a great character.   One might be so bold as to sense the possibility of love in the air for the Superior Spider-Man, but that has yet to be seen in any way.  I do firmly believe she will be an integral part to the title, in one way or another, I’m just not sure how.

After a bit of a study and food with new study-buddy Anna, Otto turns his sights back on Massacre.  As hinted at in #4, Otto’s plan is to get a hold of  Uatu Jackson (a partner from Horizon Labs) and his new version of a facial recognition program, allowing the untold number of spider-bots at Otto’s control to search out Massacre by face alone.  Eventually, the bots do in fact find him, and Spidey rushes off to his location.  The finale of this story is quite a shocker, but maybe not as you might think.  The ending alone makes this an important issue, maybe the most important since ASM #700.

While this issue was an enjoyable and exciting read, there were a few things that irked me.  First of all, this title has already been adding Batman-type gadgets to Spidey’s arsenal, which to a degree would make sense, as Otto is much more savvy in the use of the tech available to him.  It was a minor annoyance at first, but this facial recognition plan sure sounds a lot like Batman’s cellphone sonar trick used in the film “The Dark Knight”.  Peter/Otto’s co-worker Uatu even states that it is ‘too much power for one man to have’, nearly the exact line said by Lucius Fox/Morgan Freeman in ‘Dark Knight’.

This is the second issue with Giuseppe Camuncoli on art, and I have to say I’m not enjoying his very straight forward style quite as much as Ryan Stegman’s intense line work.  He is missed.  I am much happier with Camuncoli’s version, however, of ‘ghost Peter’ appearing in more of a spiritual ‘smoke’/mist form, rather then the ice or glass he looks to have been made of previously.  I just don’t like Camuncoli’s rendering of Spider-Man, as he looks like a bulky wrestler, or like he’s been spending a ton of time lifting weights.  And could we please stop changing the size of his goggle lenses from one panel to the next?  I want to believe that they have a purpose in doing so, but have been unable to see it in any consistent use throughout these issues.

Dan Slott’s writing continues to be solid and intriguing, making this title a fun ride so far.  The characters are still believable as they are adapting to this new Spidey and Peter Parker.  Slott’s dialogue and pacing is spot on, and gives the book a real depth, something not found in a lot of comics today.  Even though Otto is a bad guy trying to be good, we feel for him in his plight, and maybe even feel a little sympathy.  He’s killed hundreds of people (maybe more) over the decades, but something about seeing him so confused and vulnerable is refreshing and relatable.  Not an easy task, especially with the way Otto became Peter Parker.  Or his body.  Or whatever.  While the end scene was very effective, it did feel brought down by the whole ‘anti-publicity’ fast food logo scheme.  This seemed more like a round table discussion where a silly idea gets bigger, until it eventually enters into the work.  It just didn’t feel right.  Also, that earpiece/cell phone idea - does the thing really need to be so large?  Doesn’t Otto have the technological capacity to have some earbuds created for him?  He’s a genius, surrounded by geniuses who also happen to make tools and gadgets for Spidey’s use, so this horrible idea makes no sense.  It’s not only illogical, it also looks horrible and is far too large to even be the type of device it’s attempting to emulate.  Bad choice there, and one I hope they fix or get rid of altogether very soon.

So, how will Spider-Man ever recover from all this damage?  That’s the billion dollar question that has yet to even be addressed, but - please! - no time travel.  Having no scene in this with Green Goblin (since his reveal at the end of #4) also left me wanting.  He may know Peter Parker’s Spider-Man better then anyone, but can he take down Otto’s ‘Superior’ version?  With the way things are progressing, it’s going to be a crazy battle no matter what.

This title has been consistently good, and I’m loving what Slott has been doing with this idea.  It was far more creative than I had expected to begin with, and he has taken that idea and flown high with it.  Another very entertaining issue of one of my favorite monthly reads.