This week I’ve decided to focus again on some of the fantastic and original work coming out of Monkeybrain Comics. It’s a beautiful thing to see a small company backing creators as they produce their original work. Those are the kinds of business practices that are redeeming in this country, a chance for us to see what can happen when creators are given free reign. And with that kind of business you attract the kinds of people you want in that business. This week, namely, Michael Moreci, Steve Seeley, Greg Pak, and Matt Wilson along with their assorted creative teams, which make up the robot gorilla-strong books, Prime-8’s, Code Monkey Save World and Copernicus Jones Robot Detective.

*All books are available at http://www.monkeybraincomics.com/ or by going to Comixology. 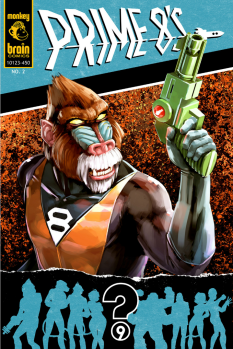 Issue #2 came out Wednesday, and now I have to wait a whole month for another one. A crisis of conscience wracks the team, with Mandrill at the center of the controversy, doubting his ability to lead the team. The threat of Dr. O still looms and a flashback provides some scintill-ape-ing back-story and focuses the Prime-8’s motivation. This was a perfect second issue as far as the continuation of a story goes, it built on the foundation laid out in #1 and didn’t go right for the kill with the epic Dr. O battle which is inevitable. Kyle Latino continues with superb pencils, colored impeccably by Jordan Gibson. There is a superhero/Planet of the Apes/James Bond love affair going on in Prime-8’s that is just a joy to read. 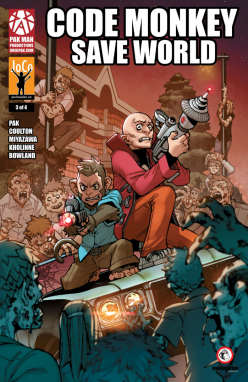 This book just keeps getting better. Greg Pak has zeroed in on the story, releasing the 3rd issue on February 5th. Here we have a book, based on a song by comedic songwriter Jonathan Coulton. It’s proof that there is inspiration anywhere, and that with the right team that inspiration becomes something great. Charles (aka CodeMonkey) and Skullcrusher (his evil boss) head a meeting Villainy Affiliated LLC, which has is planning to attack the Robot Queen Laura over her enslavement of the human population. Included at the meeting are Zombie Bob, Architeuthis (oh yeah, it’s a giant squid), and Creepy Doll, the machinists behind the “end of the world”. And that shows the intelligence behind a seemingly benign comic idea. The song is about a guy who punches code into a computer for a living and his love for the receptionist that he has to see every day. Change the human “monkey” to a real one and plop him in a world that is on the brink of every kind of disaster, from a zombie apocalypse, a robot overthrow, an infestation of creepy dolls, well…you get the picture. Greg Pak delivers comic goodness like monkeys deliver their own excrement, fast and right at your head. 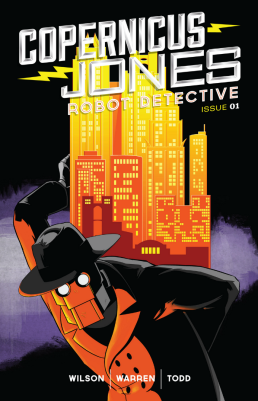 Matt D. Wilson released his robot noir comic late in January. It’s an interesting amalgamation of so many different styles and themes, and somehow he’s created it so it feels completely normal.

Copernicus Jones Robot Detective tells the story of a robot who solves mysteries for a fee and who has a penchant for betting on the loser at the track. He is hired by the wife of a parts factory owner who suspects that something isn’t on the up and up. Copernicus ends up on the wrong end of a tommy gun.

Kevin Warren arts it up Iron Giant style, in a world where robots and people live side by side. Wilson showcases the prejudices that such a society would breed, with the robots being literally less than human. It reads like Sam Spade and Harlan Ellison got together and made a chrome-plated baby. The pacing and language are straight noir with a touch of robot humor. You almost expect to see Humphrey Bogart at a bar next to a player piano named Sam…Gear up for some electric stories!

Well faithful readers, there’s another BrainTrust in the bytes, three more gems from a company that seems to know where the secret mine is. Monkeybrain Comics continues to back books that might not have a home elsewhere, and helps to make them great.