Mask of the Red Panda is based on The Red Panda Adventures, a faux old-timey pulp radio show following the exploits of the eponymous masked hero in a trench coat and his sidekick, the Flying Squirrel. However, this comic is my first exposure to the characters, and there are likely nuances of vocal performance that I’m missing out on. Perhaps this comic isn’t for me and is instead for fans of the radio show. I can understand that. But it doesn’t make for good reading on my end.

Let me preface by saying I don’t like writing reviews when I dislike a comic. I recognize that it takes quite a bit of courage and endurance to put your work out there only to have some idiot with a laptop tear it down. But although Mask of the Red Panda is a very nice looking book, I had a hard time seeing past the flaws in the writing. There’s a practice in most workshops, a requirement that negative criticism should be preceded by the features you like about a work. So let’s start with what I liked in the writing.

I think there’s a lot of potential for these characters. With a Green Hornet and Kato setup, we have the typical pulp pairing—a man with a “gad-about-town reputation,” as the intro puts it, and his “trusty driver.” I enjoyed some of the pulpier elements, such as the fight scenes and the weird gadgets, and I thought they were used rather well. I never once felt these characters weren’t capable of the feats they were accomplishing, and I’ll admit there was some snappy dialogue here and there. But despite these features, I still have my misgivings, which I’ll try to address as respectfully as I can.

As far as my investment in the story is concerned, I kept feeling an immense disconnection with the fiction. Let me explain. In pulp, you don’t need to have well-rounded characters. It certainly helps, but it’s not necessary. Most of the story is plot-driven by fantastical or sensational elements, and the enjoyment comes from seeing archetypes put into various situations. Perhaps one of the most prominent pulp characters is Sherlock Holmes, who goes through very little character growth in any of his stories (no, we’re not counting death as character growth). But what we come to enjoy from his stories is watching—through the lens of Watson—the famous detective work through the problems of a case. This is by no means an all-encompassing definition, but it will suffice for our discussion. We’ll just say that because pulp is primarily plot-driven, the plot needs to compel the reader forward in new or interesting ways.

Sadly, Mask of the Red Panda does not. The story itself is somewhat straightforward. There’s a mystery to solve regarding a building that suddenly exploded and its connection to a pack of ravenous magical creatures. Although this is an interesting premise by itself, there are so many interruptions of exposition about magic and explanations regarding the Red Panda and the Flying Squirrel’s relationship that I had a hard time investing myself in the story. It’s never really clear what exactly the stakes are or what challenges the duo about this particular case. Every obstacle is handled with very little struggle, and the blocks of informative text prevent the reader from solving the case along with the heroes. A good mystery is the slow unraveling of a thread—momentary reveals to the readers that allow them to solve the case on their own. If the narrative does all the work, there’s no reason to keep reading. And despite the quirky characters and weird exploits, I never got the sense that the case meant anything to anyone in the story. So why should it mean anything to me?

As for the other half of the equation, Dean Kotz does a remarkable job on art duties. The inks are somewhat looser, giving kind of a penciled look to the work. Although I prefer cleaner lines, I think it works well with the pulpy aesthetic the creators seem to be aiming for. Speaking of which, the book is filled with all sorts of pastels, browns and grays used to great effect to look like an old newsprint strip. If I let the pages yellow in my closet for a few years, they would be almost indistinguishable from many of my Dell or Charlton comics. Looking at this book, I’m genuinely surprised I hadn’t heard of Kotz before. He has an excellent sense of storytelling that would be right at home at any of the bigger publishers.

Like I said in the beginning of the review, I don’t like writing bad reviews about anything. And I don’t write them out of some sense of entitlement as a reader or a haughty attitude that I could do it better. Trust me, I read a lot of books in a week and, and some of them are downright horrible. As for my own fiction, I am sorely out of practice. No, I write bad reviews because I want to see creators improve. This isn’t an indictment of the writer. It’s encouragement to keep trying. Perhaps another reader will find something more in this book. I certainly wouldn’t discourage anyone from buying it. It’s just not for me. 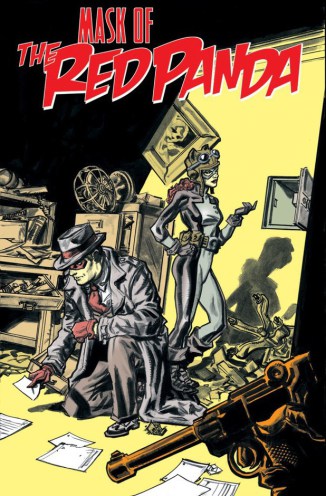