This is the single best issue of The Superior Spider-Man since the series began.

Think that praise is too high? Fine, I’ll qualify it.

Dan Slott has crafted one of the most memorable stories in Spider-Man’s history, and with this final arc, the end of the Superior era inches closer. Taking place a month after the previous issue, the Green Goblin’s careful planning finally comes to fruition as a goblin-centric crime wave overtakes New York City. It’s at this point that we find Otto, distraught that something so tremendous has happened right under his nose. I have to applaud Slott for building the story to this point, making many of Otto’s victories seem almost effortless. But for the first time in the title’s short life, I’m actually left wondering how Otto will get out of this—or if he even will. 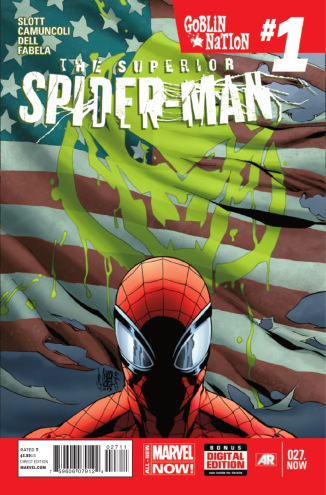 One highlight of the issue is more of Peter wandering his decimated mindscape, left with only thirty-one memories after the Parkerectomy way back in issue #9. My initial reaction to this revelation is that it’s a somewhat ingenious way to refresh the character. It’s not quite amnesia, but it’s something of a refresh (if Slott plans to keep it as the status quo). Not only will Peter have to return and face the consequences of Otto’s actions. He could have to relearn to be Spider-Man as well.

As for the other supporting cast members, Uatu Jackson makes a surprise cameo as Otto discovers why he hasn’t been able to pick up any Goblins with his spider bots. Jameson also makes an appearance as he continues down the very dark path that Otto set him on. We’ve seen before that Jameson doesn’t give in to blackmail, but we’ve never seen that determination aimed so hatefully at the wallcrawler. And as another first, I actually feel like Otto deserves it.

That being said, let’s discuss the main draw of this issue and what’s made me more excited about Spider-Man than I’ve been in years—the Superior Spider-Man versus the Green Goblin. Although Slott has continually pushed the assertion that the face under the mask is indeed Norman Osborn, that means very little in a book where Spider-Man is the body of Peter Parker possessed by one of his worst enemies.

This is actually somewhat ingenious on Slott’s part, and I’d venture to say he’s not just taunting the fanbase. He’s highlighting not only what it means to be a superhero but what it means to be a supervillain. The evidence so far includes similar actions—Norman tried numerous bids for the criminal underworld prior to the Gwen’s death; admissions—the Goblin King has said numerous times that he’s Norman; and even physical proof—the scar where the goblin glider impaled him. But so what? There’s not a shred of that that couldn’t be explained away. No matter how much “proof” Slott throws our way, I won’t believe it until the story’s over.

As for the showdown, when Otto finally confronts the Green Goblin, it’s a very calculated effort on both sides. It’s fitting that the room they’re in has a black and white checkered floor. This is a battle of wits, not strength. And both players are calculating ways to move pieces and to best hurt the opponent. Camuncoli does an excellent page that I’d rather not spoil here. It’s five horizontal panels of Spider-Man and the Green Goblin talking, in which the only changes between panels are the Goblin’s gestures. Although not the most artistically accomplished page in this comic—and trust me, there are a lot—it’s one of my favorite because it characterizes the two so well. On one side is cold and calculating Otto. On the other is the theatrical Goblin. One has smarts. The other has patience. As another pleasant surprise, this confrontation had a completely unexpected result.

If the next issues are as strong as this one, I’m going to run out of praise by the end of the story. All I’ll say is that if this is what the entire run has been building towards, this is going to be a story people will talk about for decades to come.

Also, here’s a kitty variant because what the hell. 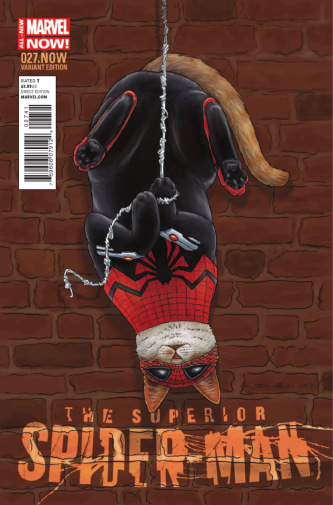