The last couple issues of Thunderbolts have gone to Hell; literally I mean the team, with the exceptions of Elektra and the Punisher, has been trying to get out of Hell. The addition of Ghost Rider, Johnny Blaze to an already unorthodox team of killers, mercenaries and supernatural beings including the mysteriously menacing Mercy, the comedic cut-up, Deadpool, the symbiotic soldier, Venom all under the leadership of “Thunderbolt” Thaddeus Ross, the Red Hulk has made for one hell of a team dynamic, pun intended. This team succeeds in spite of itself, the personality disorders represented by the individual team members could keep an entire staff of the best psychiatrists busy for years, but that’s the appeal of this series. Their inability to operate as a cohesive unit provides much of the darkly humorous material that has kept this book on my must read list since Charles Soule took over for Daniel Way as writer. Soule has mastered this team of misfits in a manner that seemed to elude Way, which I found surprising because Way did such a great run on Deadpool. However the team paradigm proved to be a stumbling block for Way. Soule deconstructs the team and re-builds it by mastering the single characters, one at a time. He has found each of their voices as separate players allowing them to come together as an ensemble, albeit one built of miscreants and oddballs. 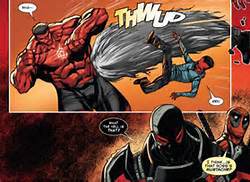 Thunderbolts contains so many varied tropes that it defies categorization; there are supernatural elements along with super hero characteristics and comedic components all working in concert to make up one the most entertaining and enjoyable comic books in Marvel’s impressive line-up.

Soule’s strength in well-developed characters serves to enhance the interactions in this book; his clever dialogue and confident use of humor add a dimension of humanness to the macabre situations this team inevitably find themselves in, the individual juxtapositions of these reluctant and cantankerous teammates works wonderfully as particularly fertile ground for quirky and off-beat misadventures. For instance, in this issue Soule’s characterization of Ghost Rider as a man apart from the rest of the team works well as he uses Blaze as a sounding board for the others’ sometimes ludicrous ideas for escaping their current environment. Soule’s take on Ghost Rider as a jaded being who has long ago come to terms with his fate is in direct contrast to the other Thunderbolts who are having no end of trouble facing Hell and things go from bad to worse when Mephisto shows up to deliver some unexpected news. This issue ends with a reveal that no one could have seen coming but it works so well because of Soule’s meticulous build up.

The part of the narrative concerning Elektra and the Punisher, while decidedly more serious is no less entertaining, Soule writes the Punisher unlike most other writers have thus far. He uses the character as something of a straight man in the group but more than that he writes a human side of the mercenary. The relationship between Punisher and Elektra is complex and Soule delves into it deeper than two killers in love. The earlier exploration of a bizarre love triangle involving the two plus Deadpool provided a humorous element however it has turned into some real character development.

Carlo Barberi does an extremely effective job capturing the darker tone of this issue. His depiction of Hell while somewhat sparse at times gets the tonal quality right. Where he excels is on character design, his Ghost Rider is particularly well rendered as is rippling muscled Red Hulk. Barberi really fits well on this book but I think the ideal artist has yet to be found.

This issue is indicative of why the series, under Soule’s direction, has become so consistently entertaining and enjoyable. His smart characterizations, clever and genuine dialogue along with some really inventive and imaginative story ideas have combined to make this book a keeper on anyone’s pull list that enjoys some offbeat antics and quirky characters in their comic books. If you have been reading and enjoying Hawkeye, Superior Foes of Spider-Man, Deadpool, Larfleeze and Harley Quinn as much as I have, you should not be missing out on the inspired madness of Thunderbolts. (4/5)