Sometimes, all you want from a Spider-Man book is some symbiotes, spider-bots, and subplots. In this issue, Dan Slott and Christos Gage deliver that in spades. After the previous issue’s exposition-heavy script, I’m glad to see many of the story threads move forward. END_OF_DOCUMENT_TOKEN_TO_BE_REPLACED

It can sometimes be difficult to gauge the quality of a story arc from its first issue. If I were to make a list of things I’m sad we didn’t see in the inaugural meeting between Flash Thompson in the Venom identity and his hero, Spider-Man, then those very things could happen in the next issue. END_OF_DOCUMENT_TOKEN_TO_BE_REPLACED

As a comics fan, I can hardly discount the profound impact that Spider-Man has had on my comic reading experiences.  I’ve always looked to old web-head for an enjoyable read, and I have for the most part seldom been disappointed.  (The clone thing was confusing for everybody.)  I found this copy of Web of Spider Man #1 at the comic shop for a buck, and it was worth it. END_OF_DOCUMENT_TOKEN_TO_BE_REPLACED

We love heroes.  As a culture there are certain people who have been elevated above the rest of us by their actions, weather it’s Odysseus and Achilles in classic literature, or Wonder Woman, or Miguel Cabrera, (sorry to throw a sports reference in there) these are people who perform under pressure.  Everyone has a favorite.  But there is something fascinating in watching a hero fail.   It personalizes those that we have idolized.  And their redemption afterwards is sweeter to us as well.  It has been done in comics as well.  Speedy, in the Green Arrow/Green Lantern #85 and #86, was a heroin addict, a watershed moment in the comic depiction of mature themes.  Spawn was in search of constant redemption in spite of his own fallen nature.  These are characters and storylines that have become among the most popular over the years, but what of comics’ most iconic character?  What of the Batman? END_OF_DOCUMENT_TOKEN_TO_BE_REPLACED 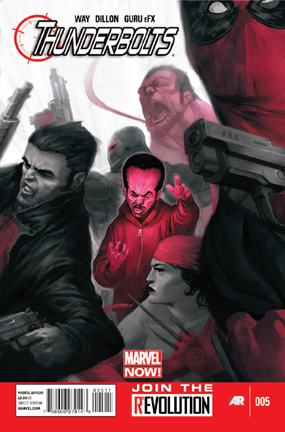 I’ve been really enjoying this title.  Super silly, gory, and full of great over the top action!  Even though I’m not totally familiar with all the characters they feel true and right where they should be.  The intro thingy on the back of the cover talks about how they were brought together to take down evil they could never have reached on their own.  Which they do, you just don’t care who it is - and neither do they.  The king or whatever of somewhere is really mean to his people and has enough power to be a threat to some other country and more importantly has something powerful the big wigs want, blah blah blah.  It doesn’t really matter with this title.  Deadpool, Elektra, Punisher and Venom just like killing bad guys and we like to watch.  Of course Gen. Ross has his own agenda that gradually unfolds, and members of the team begin to uncover super crazy stuff happen behind the scenes in what is already a horrible place to live.  Throw in a “angel” and a love triangle and you’re ready for anything.  Very gory without trying too hard.

Deadpool and Punisher are a great goofball and straight man team, but the scene where Punisher straps a landmine on himself bothers me.  Sure, he might do that were alone, trying to save a bus full of kids or something, but not when there is a big mouth smart ass with the ability to regenerate standing right next to him to strap it to.  WTF!

For the most part the writing by Daniel Way (Astonishing X-Men, Ghost Rider, Incredible Hulk) is solid and easy enough to follow.  The artwork from Steve Dillon (Preacher, Avenging Spider-Man, Hellblazer) is good but every character’s face is as flat as the backgrounds. The coloring is horrible, and makes everyone look plastic.  Most of the time it looks like the characters were drawn separately from the panels and backgrounds, to be layered together later.  Also, a light source of some kind seems to be coming from everywhere, even in the jungle - no shadows or shading except by their own bodies on themselves.

This is a very fun read but sad to say I won’t be surprised if we see the creative mojo run out after a year or so.