There are sure things in the realm of comics and literature.  Some authors and artists you pick up because their name is on a book.  That’s the simple truth of it.  For all of the admonitions of elementary school librarians, we judge books by their covers.  And often when we’re paging through PREVIEWS magazine, or browsing the over-packed shelves of our local shops, it’s the art or the name on the cover that makes us pick it up.

Just so with A.D. After Death Book One.  Scott Snyder has built a reputation as one of the most innovative writers in the genre, and one that imbues a certain amount of respect and admiration when his name is on the cover of a book.  His track record has been strong, so strong, that I would buy a book by him without knowing about it first.  Add the name of Jeff Lemire to that same cover, and I will drop it on the counter without opening  it.

Then you get the chance to page through it, to glance at the artwork, to relish the anticipation that comes with the starting of a new book you know you will like.

A.D. After Death is a book that is a balance between the novel and the comic, one that epitomizes the “graphic novel” moniker in a way that seems to have fallen by the wayside with the advent of trade paperback collections.  This is graphic in a way that only Jeff Lemire can make it, and its dense blocks of text are such that you know Snyder has way more to write than is able to fit in a normal sized comic. 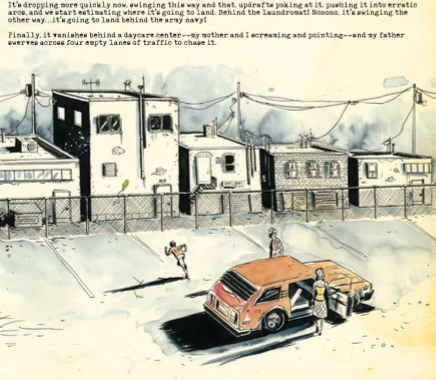 There is a pairing between the memory that is transcribed and the future/present as it’s happening, a perfect balance between the remembered past and the present, and it’s graphically represented by having the “past” parts more of a journal entry, and the present parts being the comic form of the book.  It is a very visual thing, those blocks of words opposed by beautifully watercolored artwork.

This is a world where death has ceased to be a thing.  As far as we can see in this first book, there aren’t really that many people, but the ones who are alive have been so for hundreds of years, and society has made a drastic change because of immortality.  The care of the planet seems to be more in the forefront, as well as the cycling through of people in jobs.  Do a job for a couple of decades and move on to something else.

The narrator, Jonah Cooke, is in the midst of one of those transitions.  He leaves a job at a “farm” for one at an “outpost”, a listening station high on a mountain, where he will be by himself and wait near a high tech cb radio for communication from elsewhere.  That’s basically the main plot of the first book, but because of this crazy great Snyder/Lemire pairing, you have a huge backstory about Cooke’s early life, his mortal life, and his parents and the death of his mother and her unborn child.  Those are magical times for Cooke, and he spends immortality reflecting on a couple of months when everything seemed perfect. Cooke is in a cycle of his own, one of remembering, or trying to keep from forgetting, the things that make him who he is, and what makes humans what they are.  It feels to me like there is an undercurrent of the fear of forgetting beneath this book, one that would surely be a problem for an immortal.  Who are we once we forget who we are?

If ever you question the legitimacy of comics as an art form, this is a fine example of just how impactful a story/illustration combination can be.  Scott Snyder and Jeff Lemire have once again risen the bar on what can happen in the medium, and I can’t wait to see more of A.D. After Death.