The final battle rages at the gates of Autobot City in REVOLUTION #5, as the Transformers, ROM, Micronauts, G.I JOE, Action Man, and M.A.S.K, are faced with the terrifying consequences of Baron Karza’s enerchange with the Ore 13 empowered Dire Wraith leader. The fate of Earth, Cybertron, and Microspace now hang in the balance as new alliances are forged to confront the terrifying wrath of Baron Karza!
IDW Publishing’s brand-wide celebration of more than a decade of adventures concludes in REVOLUTION #5, as the all-encompassing storyline to bring the IDW and Hasbro properties: Transformers, G.I. JOE, Action Man, M.A.S.K, ROM, and the Micronauts together into one collective universe takes shape as writers John Barber and Cullen Bunn, and artist Fico Ossio, steer REVOLUTION towards its thrilling finale!

Miles Mayhem, Matt Trakker and the Agents of M.A.S.K with their Cybertronian modified vehicles find themselves stuck in the middle of a war zone after Baron Karza merged with the Dire Wraith leader - who was formerly disguised as Caleb Awan - and betrayed the Dire Wraiths. Now the Transformers, ROM, Snake Eyes, and the newly arrived Pharoid Oz and his fellow Micronats are going to need all the help they can get if they are to save Earth and Microsapce, but even with Scarlet and the forces of G.I JOE, along with Action Man and Kup racing to Monument Valley to offer assistance, can their combined might be enough to offer the world any lasting hope of defeating the power crazed despot Baron Karza?
Autobot City in Monument Valley provides the backdrop for REVOLUTION Chapter 5: Valley Forge, as writers John Barber and Cullen Bunn skillfully bring all the interconnecting plot threads of this crossover event to a close, and what a rousing finale it is! Even though the Interchange has made Baron Karza into an all-powerful Wrath hybrid, Optimus Prime resolves to rally everyone against this creature responsible for destabilizing Ore 13, and unite human, Micronaut, Space Knight, and Transformers to stand together against this terrifying menace. The action is frenetic, the techno-babble is often mind bogglingly complex, but John Barber and Cullen Bunn never once overplay these elements of the story at the expense of the characterization, if anything it actually plays to the characters individual strengths, and the eventual genre defining moment which has the ensemble cast of characters setting aside their differences to forge a plan to defeat the Karza Wraith abomination ends up feeling eminently more rewarding and satisfying as a result. 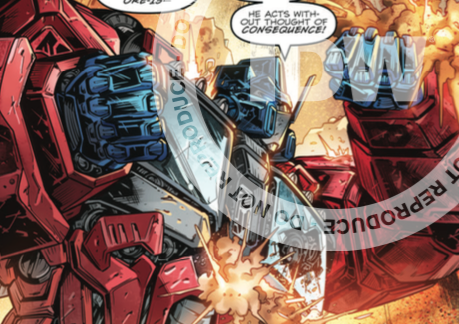 The awe inspiring artwork for REVOLUTION #5 by Fico Ossio makes this issue a truly jaw dropping spectacle. Fico Ossio ensures that every scene is packed with detail, which, considering the impressive roll call of characters running around in this issue, is an absolute testament to Ossio’s impressive and consistent work on this series. There are so many standout moments: Prime’s gambit to bring Snake Eyes, ROM, and Acroyear together as he transforms into his truck form, Scarlet and G.I JOE charging into battle, Karza Vs Victorion, and the explosive final stand against the Baron Karza Wraith hybrid, all unfold across kinetically paced page layouts where action sequences are punctuated with big splash pages to die for! The colors by Sebastian Cheng are gloriously rich and vibrant throughout, and this surprisingly dialogue intensive issue is made an even more engrossing read thanks to the concise lettering by Tom B Long. Add to that the brilliant regular cover by Tradd Moore & Felipe Sabreiro, along with a host of impressive variant covers to choose from as well, and you will be left in no doubt that IDW has pulled out all the stops for the finale of REVOLUTION!
REVOLUTION #5 concludes in the most action-packed and heroic way imaginable, sacrifices are made, some even find redemption for their past actions, and differences - if not completely ironed out - are at least resolved for now. Optimus Prime’s speech in this issue is one that perhaps resonates most powerfully of all given today’s climate. I think the conclusion of REVOLUTION is brilliant, especially how the differences of dialect, culture, and goals between the Transformers, humans, Space Knight, and Micronauts becomes the key to ending the conflict between them and formulating a plan to tackle the threat of the Karza Wraith Hybrid.
Overall, I think IDW’s REVOLUTION crossover event has been a resounding success. The creative teams on the RECOLOUTION mini-series and the one-shot tie-in issues have all done a fantastic job. The masterstroke was how everything was structured in a way so you could enjoy the five-part REVOLUTION mini-series as either a stand alone story or in conjunction with the tie-in issues involving Transformers, G.I. JOE, Action Man, M.A.S.K, ROM, and the Micronauts. What’s more REVOLUTION wasn’t necessarily a reboot or a rebranding for these IDW and Hasbro properties, it became a unification of them, and with REVOLUTION #5’s stunning story and artwork IDW Publishing have now paved the way for a bold and exciting new chapter for these characters, and I can’t wait to see how all of their stories continue in the current titles and the brand new Optimus Prime #1, M.A.S.K Mobile Armored Strike Command #1, G.I JOE #1, Transformers: Lost Light #1, and REVOLUTIONAIRES #1 ongoing series’ coming from IDW.