Review: Chapter 86 tells the story of Grisha Yeager, Eren’s father and how he came to be the man he is today. And while it doesn’t explain everything it certainly answers a helluva lot of questions. Some I find very interesting while others I do not. Ultimately I always find the Titans as creature humans just have to deal with to be a lot more fascinating than Titans being humans in giant-sized bodies. 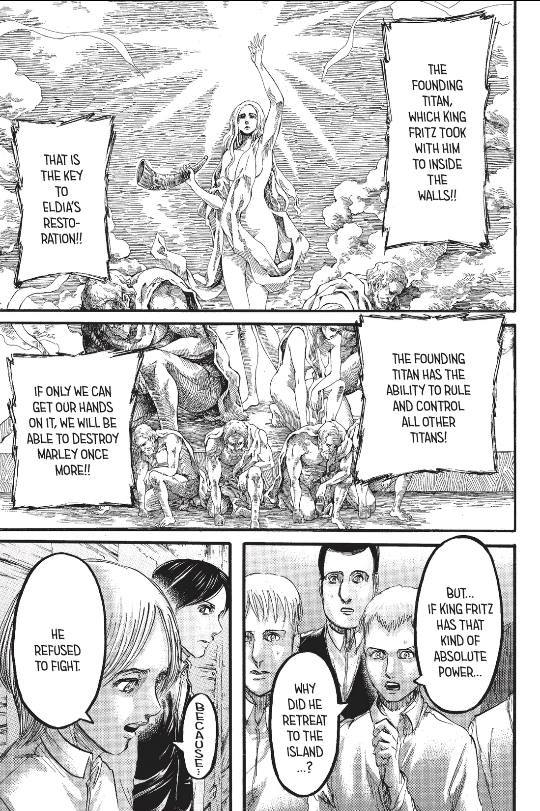 We get a lot of backstory here however as Eren and the others read from Grisha’s diary. We go back to “that day” as many manga authors love to say, using like “it” and “that” to make us guess in anticipation as to what “it” and “that” are. It’s a stupid motif and overly tropey and not even Attack on Titan is free of that sin. Grisha and his little sister go out on the town to stroll about when they see a blimp whirling overhead.

The two lost the blimp at a checkpoint as we find out that they’re not allowed to leave the gates but they do anyways and find the blimp docking in a landing area outside of town. They come across two soldiers who’re taking naps but upon seeing the kids punish Grisha and escort the sister – her name is Fay – “home.” And by home I mean she was killed and her body thrown in the river.

Eventually we learn that Grisha and his family are part of a bloodline of people called the  Eldians that exist within an interment zone, persecuted under the might of another people called the Marley. Having violated leaving the internment zone Grisha was beaten and his sister was killed to teach a lesson and throw around their cruelty.

What follows is a long winded explanation about how long ago, a girl named Ymir made a deal with the devil to have the power of the Titan. When she died her soul and the power of the Titan was split between nine people, nine powerful and “special” Titans (I assume this is where we get the Colossal Titan and Armored Titan) with one all-powerful Titan who can control them. I would imagine that’s the Beast  Titan.

This led to those with the powers of the Titans to begin purging the world of non-Eldian people, giving the power of the Titans to many different people after that. I assume because the power is heavily diluted this is what leads to some ridiculous looking Titans as well as the humans inside them having no control over their actions. None of this is stated within the chapter but it’s my educated guess based off of what we know. 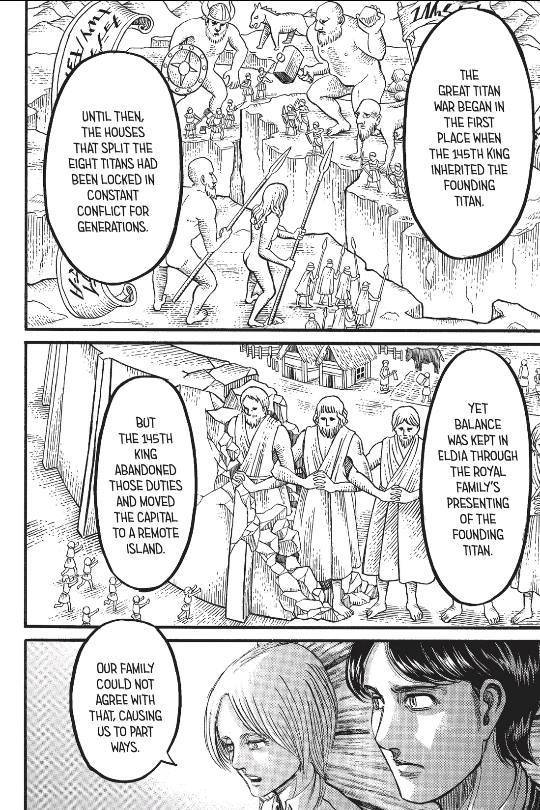 A great Titan war erupted between the Eldian’s and the Marley’s whom at this time also had Titans at their disposal and the Marley’s eventually won out. The king of the then Eldian royal family, Fritz, fled to the secluded island of Paradis where he erected the great walls and cities we know today in the main Attack on Titan narrative. On the mainland however the Eldians were persecuted for sharing blood with those who originally oppressed the Marley’s which led to Grisha eventually growing up to join an Eldian rebel party.

During his rebel days Grisha discovered a text that showed, in his eyes, the “true history” of the world where Ymir and her Titans brought prosperity and peace to the land, and it was the Marley’s who broke all that up by seeking power, but as it explicitly states in the chapter Grisha can’t read the writing of the old tongues so he can only assume that this is what he’s looking at. That’s definitely going to be interesting to deal with later down the line.

A member of the Fritz family on the main land, remember guys Historia is a Reiss and she’s currently residing as Queen over the civilization Eren and the gang come from after we found out that the current King Fritz is a puppet king to the Reiss family. You can see how convoluted all of this is getting at this point. Anyways, a member of the Fritz family joins the rebel group and eventually marries Grisha. The two have a kid and after the Marley’s announce that they plan to gather up kids among the Eldian’s and give them Titan powers in order to get ready for a war, Grisha sees this as an opportunity to get in good with the Marley’s and begin an uprising.

His kid, named Zeke, rats them out however and the Marley government decides to send Grisha and his wife to “Paradis” to walk among the island as a Titan. Thus explaining why wild Titans are often found outside the walls of civilization. This also means Eren has an evil, older step-brother.

Ah, Attack on Titan, why do you have to be so bloated?

As you can see this has become and incredibly interesting book if for no other reason for me to watch Isayama succeed or fail at tying up all of these needless plot threads that he’s introduced. Obviously I want him to succeed because that in and of itself would be a remarkable achievement. With plenty of story left to go we’ll see what happens. For better or worse I’m stickin’ with it till the end.

Final Score: 3 Titan-sized Revelations out of 5