We are now three titles into the Young Animal imprint, for those of you who may have been off planet for the past few months, Young Animal is the new Vertigo-like imprint at DC Comics under the creative guidance of visionary writer and Grant Morrison protégé, Gerard Way. Like Vertigo, young Animal is designed to be the home of books that, although very much a part of the DC continuity, these titles share a more eclectic and progressive tone, often darker and geared more to mature readers.

What began as the resurrection of the Doom Patrol soon became the complete reconstruction of the ethereal corner of the DC universe, however this time around DC is determined to maintain internal continuity as well as a certain tone of post-modernism in regards to super hero books. Vertigo seemed to have lost these elements by the late 90s becoming something more akin to current Image Comics which is entirely made up of creator owned titles; Young Animal is heavily super hero centric as is evidenced by the first four books in the line which we will take a look at here starting with Doom Patrol.

Gerard Way and Nick Derington now have three super strong issues of the Doom Patrol under their belts, but issue three is in my opinion the strongest so far this is due in large part to the inclusion of the Grant Morrison and Brendan McCarthy created character Danny the Street. Also known as; Danny the Brick, Danny the World, Danny the Island and Danny the Alley, the character first appeared in 1990 in Doom Patrol vol. 2, #35. The rather unusual name is actually a pun inspired by female impersonator Danny La Rue, La Rue translating in English to the street. Okay, enough history on Danny now back to his involvement in the current issue; Casey speaks to Danny through a long box of back issues in a comic book store when it is revealed by Danny that she, like everything around her, may be one of his creations. It is easy to see Morrison’s indelible influence on Gerard Way’s writing, particularly in his extremely creative narrative style when crafting the dialogue between Danny and Casey as well as creating some amazing chemistry between Casey and Flex Mentallo.

The third installment in the “Brick by Brick” arc is entitled “It’s a Doomed World After All” and the Disney metaphors do not stop there, in fact Danny the Street is going by the name Dannyland. As the story opens we find Casey and Flex strolling along a meandering Danny who bears considerably more than a passing resemblance to Main Street ala the garish Disney theme parks. Doom Patrol artiste extraordinaire Nick Derington spares no detail in rendering the trippy magnificence of the whole scene. We are brought up to speed via Casey and Flex’s chat however before things progress much further into the complex plot we are quickly swept over to Casey’s apartment where Larry Trainor is discovered by Casey’s roommate, Terry None. This issue alternates between these two narratives filling both with tons of kinetic energy, bizarre takes on the Doom Patrol’s storied past and some of the best character development to be found in any comic book currently on the racks. To top the entire wonderfully strange opus off we are given yet another glimpse into the life and times of Niles Caulder.

Gerard Way is doing a bang up job of carrying the Doom Patrol standard into battle. His narratives are complex but not complicated in the way some self-proclaimed eclectic writers can be, in other words those writers trying to be weird in an attempt to be thought of as deep in that way that Morrison, Way, Moore and Ellis, to name a few, truly are. Way is genuine and that comes through in his characters and much like Morrison’s brilliant run, I am sure that Way’s work on Doom Patrol will take on a life of its own the more we read it the stronger it will get. 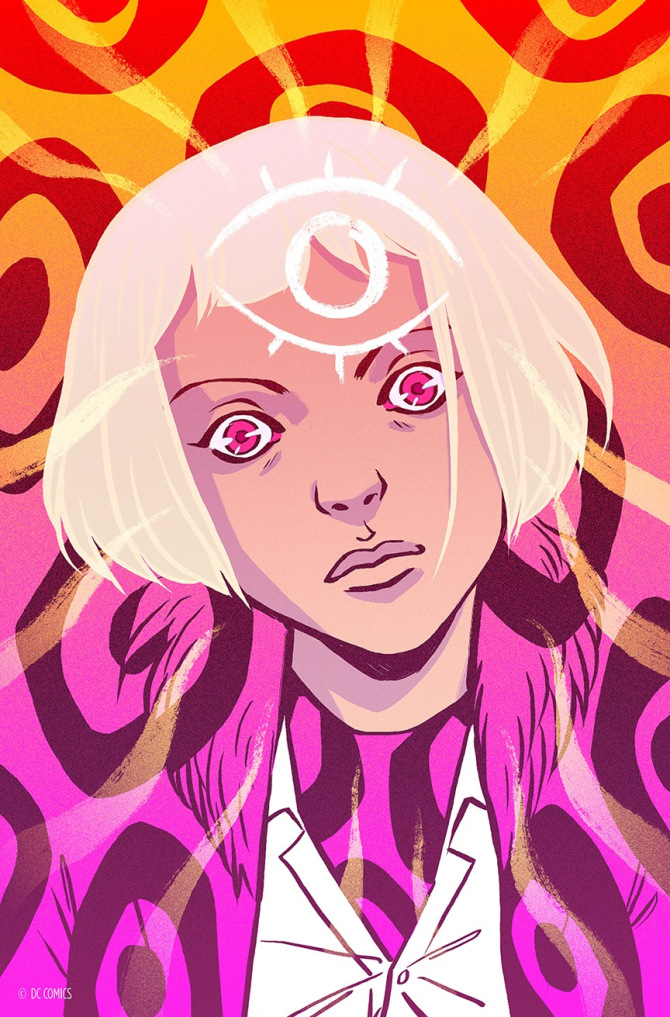 Next up from Young Animal is Shade the Changing Girl. We are now two issues into the first arc as of writing this piece and I must say I am already really hooked on this book and its lead character, Shade, which is an amalgamation of the mind of Loma and the body of high school student Megan, who intentionally overdosed in the first issue. Series writer, Cecil Castellucci is meticulously developing the Shade character, really taking her time with the details. Castellucci presents the Shade character with a kind of childlike wonder which is in almost direct contrast to Megan’s character when she was alive. Let’s face it she was not a very likable girl; controlling her parents and peers at school, so it’s fun to see her now lost in this new world like Alice down the rabbit hole. Castellucci’s character work really has taken center stage at this point.

The second issue purposely slows the pace a bit completely to the narrative’s benefit; the madness seems to have taken a bit of a backseat or it could be that Shade has a better handle on it, either way it allows for a nice steady albeit decidedly slower pace at which the plot progresses in this issue. Castellucci and artist Marley Zarcone are creating a smart comic book that is engrossing and gorgeous; this book is a tremendous addition to the Young Animal arsenal of mind blowing titles. 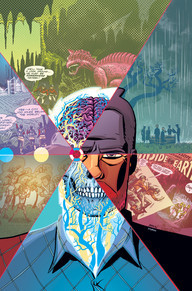 The next two books have just one issue each on the racks at this time, but both of the inaugural issues are exciting and well crafted; I am of course speaking of Cave Carson Has a Cybernetic Eye and the Gotham set Mother Panic which just dropped this week. These two titles are quite different in that one comes from the very depths of DC obscurity, Cave Carson is a little known, little used character from DC’s sci-fi 60’s and the other is a brand new creation from up and coming writer Jody Houser, Mother Panic is the newest vigilante to hit the streets of Gotham, but she is, by her own proclamation, not a member of the Bat Family.

Gerard Way and Jon Rivera have done some spelunking of their own; deep into the storied past of 1960’s DC continuity the two cutting edge creators have rescued Cave Carson explorer extraordinaire of Earth’s mysterious underground dominions that is of course before he retired to start a family. The first issue in this new Young Animal series begins with Cave mourning the loss of his wife, Eileen while their daughter, Chloe handles her grief in quite a different manner; Way uses their mutual discontent as an element to make the pair very human hence. As you have probably deduced by this point Cave’s signature cybernetic eye plays a rather significant role in developing his character. It seems that the eye is constantly scanning and taking in information whether Cave wants said information or not, this makes it almost impossible to get anything over on him as Chloe finds out very early on in this issue. Although the eye can serve Cave very well at times it can also be very taxing on his sanity simply by the sheer amount of incoming data.

Michael Avon Oeming’s art works in perfect unison with Way’s writing. Oeming provides the perfect mix of kinetic chaos and subtly nuanced detail to bring Cave’s world to life. His visual vocabulary of extremely expressive facial renderings and equally expressive body language give these characters the ability to speak volumes with minimal words. The issue is very packed for its standard issue page count and moves rapidly to a final page revelation/cliff hanger that seems to come from out of nowhere. All I can say of this final panel mind blower is that it goes quite a ways to firmly place Cave Carson smack dab in the middle of the DCU proper. I will admit that this involves the inclusion of a character that feels exceedingly random, however given the eclectic tone of the Young Animal books it could turn out to be an amazing plot twist, either way I am all in for this one.

Finally that takes us on a trip to Gotham City with Mother Panic. This series is centered on Violet Paige, a sort of cross between Lady Gaga and Batwoman. She is very much a part of Gotham’s elite nightlife both as a vigilante and a celebrity. Paige is more concerned with the darker corners of Gotham City, those maybe even too dark for The Dark Knight, that remains to be seen, but seeing as this title is recommended for mature readers we may see some of these seedier areas of Gotham’s crime-ridden underbelly.

The first issue presents a rather unpleasant social scene that does more to set the tone of the series than to address any of the obvious questions about the new vigilante on the block; however the numerous Batman references serve to ground the book in the Bat mythology even though Paige professes no affinity for Batman or any member of the Bat clan. We get very little in the way of explanation of her motivations or machinations in the debut issue; what we do get from writer Jody Houser and artist Tommy Lee Edwards is an intriguing glimpse into the deeper, darker shadows of Gotham and a sense that anything can happen and no one is safe. This book, perhaps more than the others seems to fit into the DCU proper and the current Rebirth continuity; it has the feel of a “Bat Book” which makes me all the more eager to dive into the darkness with Mother Panic.

Well there you have folks my very first foray into the world of DC’s Young Animal imprint. I hope you’ve enjoyed it as much as I enjoyed reading these books and sharing my opinions with you. I highly recommend every one of the Young Animal titles on the racks so far and look forward to the imprint growing and becoming what Vertigo was for DC readers of the Clinton era. So until next time, Excelsior!