Story and Art by Tomohiro Yagi

Summary: Tatsu Frampt is a young boy living in an orphanage along with a score of other kids who’ve been isolated from society for a unique illness that only they have. With metal growing out of their hands, these children are overseen by a man named Duran who suffers from the same illness. All that comes crashing down in a barrage of bullets when the orphanage is attacked and soldiers come looking for the children. Tatsu’s world is changed forever when he learns the truth of his illness and the reasons behind the military’s hunt for his friends…

Review: Red Sprite is Shonen Jump’s third most recent Jump Start series and the latest addition to their line-up as I write this. It accompanies two other series that I’ve reviewed recently, The Promised Neverland and Love Rush. Thankfully Red Sprite manages to hold its own against the competition and be an entertaining read all at the same time.

First off, and this is by far not a detractor just an observation I found funny, what is it with Jump and releasing 2 series that take place at orphanages? I found it funny more than anything but thankfully where as The Promised Neverland so far only takes place at an orphanage it’s only the first half of Red Sprite chapter 1 takes place in such a location.

The beginning is rather slow at first with us getting to meet the kids, their overseer, and a bit about this world. This world is still set in a steampunk world but its also a bit post-steampunk as well, because while the aesthetic is such it’s not steam that’s powering the technology of this world.

A new energy source buried deep within the Earth has been discovered called Plasmarrow and its so powerful that we’re told it changed civilizations seemingly overnight. Alright that’s really cool, I like that. I think the name is hokey but it’s not that bad, really. I really liked that we got to hear about how this world functions because it does breathe life into the setting and history of this story before we get to the main plot.

We get to know a few of the kids, things are going great and they’re designing their own aircraft through a class drawing. It’s fun and innocent. Until a couple of planes come swooping down and light up the place with a barrage of bullets. We find out that the military, and specifically a mad scientist named Lt. Colonel Shepherd has been searching for these kids for a long time. 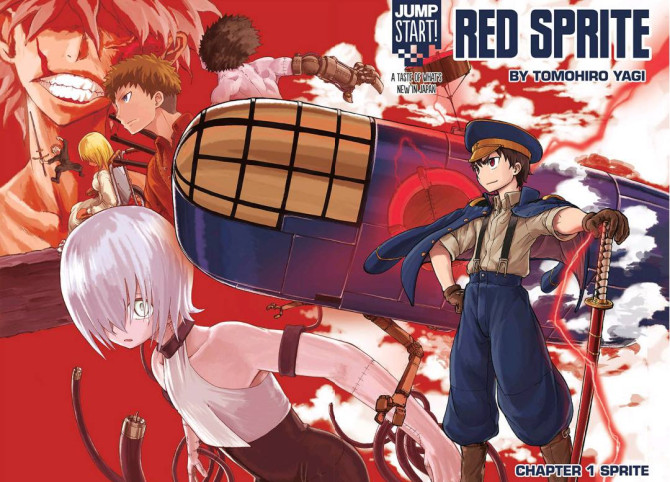 This leads to Duran attempting to escape and only being able to take Tatsu with him as all the other kids are subdued. During this Duran gets shot twice but still manages to take a sword to Shepherd’s back but unable to kill him.

In town where they’ve fled, Duran explains to Tatsu the truth behind the children’s illness and I was very surprised we were getting the answers this early. These children, like Duran, were part of government experiments to create human Plasmarrow conduits to power the machines of this world. The rods growing out of their hands were implanted there as conductors for the machines.

He drives this home by showing Tatsu a man with their same afflictions being used as an energy fountain for an aircraft they’re able to down. It’s a striking image and a pretty cool way to explain what’s going on with all these kids. Duran tells Tatsu of his own history, of how he was saved by soldiers not down with the experiments and how he vowed to save their children, Tatsu and the others, from succumbing to the same fate.

I bet this means that Tatsu’s dad is still alive out there somewhere in the world. I wonder if they’ll meet one day.

The story then jumps to six years later after Duran dies. Tatsu has had proper time to fend for himself, teach himself the way of the sword, and harness the powers within him. The metal rods in his hands allow the conduction of electricity and the control over Plasmarrow. When a newly built aircraft is built being powered by children being used as military guinea pigs Tatsu appears and uses his new abilities to kill Lt. Shepherd, save the children, and commandeer the aircraft which he dubs the Red Sprite.

I really liked this first chapter as it gives us a very interesting premise and moves along pretty quickly with characters that I wasn’t expecting to get in the first chapter. The aesthetic of this world is very German, kind of has a Fullmetal Alchemist vibe to it. And the art style definitely lends itself to the shonen jump style. Round faces, big eyes and mouths, tons of spirit and incredibly kinetic energy. Literally in the case of this manga.

Final Score: 3.5 Plasmarrow Conduits out of 5