Summary: Yamada wakes up on an uninhabited island after falling off the cruise ship his class was on in the middle of the ocean during a thick fog. Alone, he begins building a raft and finding ways to survive until he discovers a female classmate has washed ashore as well. The two learn to survive together until one of their teachers washes ashore and generates animosity between the three of them. After nearly two weeks of living on this island Yamada is swept up by a fog only to regain consciousness while being rescued in the middle of the ocean 15 minutes after he had originally fallen overboard. What is this new reality Yamada finds himself in? No one believes him about the island he stayed upon with his classmate Imaise Chika and their teacher Shibata. But when Shibata shows up unscathed and with no memories of what happened it’s now up to Yamada to discover the truth for himself and find the missing Imaise.

Review: If there’s one sad fact about being up-to-date with the releases of a series you’re really enjoying it’s that it means you’re having to wait – often times – an ungodly amount of time between releases. Especially if that series is monthly and also likes to take whole month breaks in between chapters. With Let’s Lagoon it’s been 2 months since chapter 50 hit and now we have to wait until January before we get to chapter 52.

This is where the series does falter for me now being caught up. During my big push to reach the latest chapters I got to see a lot happen over the course of 49 chapters but each chapter was around 12-15 pages on average. So put that into perspective, 12-15 pages each month or every other month. It’s a taste but not a full course meal and damn it I want more.

It also doesn’t help that after 51 chapters we have yet to reach the “tragedy” that future Yamada is attempting to prevent. Thus we reach the crossroads most stories hit at some point and is the purgatory for readers everywhere: a drawn out narrative. It’s the bane of my existence as a consumer and storyteller… and yet, Let’s Lagoon is still so very solid. We’ll see if my tune changes half a year from now when several more chapters have come out and I’m still reading month to month, but for now I’m still on the high from my binge read and I love these characters so much.

That all being said, chapter 51 is a damn interesting chapter and a major event does indeed happen in it, even if a lot doesn’t actually happen overall. The main story for this chapter focuses on our 3 heroes: Yamada, Imaise, and Nori being rudely awaken as a strange high tide comes in and begins pushing them out of their living area on the beach.

It becomes apparent real quick that there is way more going on than meets the eye and by the end of the chapter the entire island has sank leaving the kids stranded in the middle of the ocean on the life raft Yamada made at the beginning of the series. Now you may be asking if this is the tragedy Future Yamada was referring to. It’s possible, it’s very possible, but given that it’s been heavily hinted at that Nori isn’t around in the future… I really think that as long as she’s in the picture we haven’t quite reached the “big tragedy” this story has been building towards. 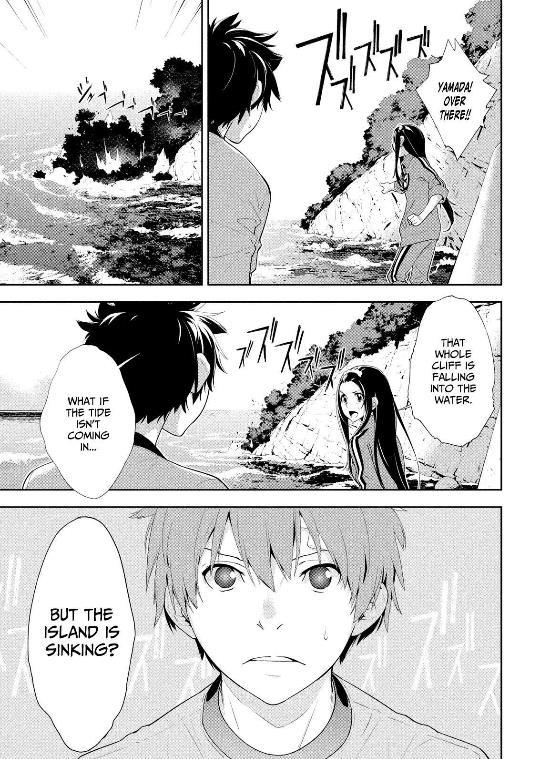 And what about Future Yamada? He was last seen standing in the darkness overlooking our heroes on the final page of the previous chapter so he’s still around however he’s nowhere to be seen in this chapter leaving his fate as per the sinking of an entire island a mystery. I’m very curious to see what happens next. All I ask for is a bigger page length and for us to finally reach Future Yamada’s “tragedy.” For now, my excitement has yet to truly waver. This is still one of the strongest manga I’ve read in a good while.

Final Score: 4 Sinking Landmasses out of 5