“Story so far…serving a life sentence for his violent criminal past, mafia gunman, Roy ‘Triggerman’ Nash, finds himself abruptly free from his prison cell and tasked with one final job, but all this straight-shooting mobster really cares about is Lena Dorsey, the woman he was forced to leave behind…”

Sometimes the writer does it for you, and the synopsis they create is more succinct and perfect than anything you could come up with. 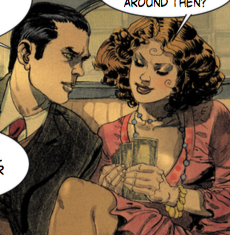 Here we are, back in the world of mobsters and dames, when cops are the only thing dirtier than the politicians.  Roy Parker (previously Roy Nash) is stalking the streets of Los Angeles for the man who got him out of prison and renamed him, and in the course of this vendetta, hoping to track Lena down.

In this issue, we get a better idea of how Roy got out of prison.  Nick Canino is a friend of “Al’s” (who we can only assume is Capone) and has the connections and pull fake Roy’s death and create him a new personality.  Because of the logistics of pulling this off, Roy is in debt to Canino and his boss.  This is the impetus for his trip in the first issue.  Now he’s after the other two guys that were in on the heist in the first place, Babe Fulton and Joe Start, who not only killed Al’s nephew but took off with half a million dollars.

Once again we have a tightly written story from the mind of Walter Hill (Warriors, Red Heat) who delivers a classic crime story the likes of which I love to read.  The adaptation my Matz stays true to the cinematic origins that Hill lays down, and keeps the pace up.  This issue really began to build the backstory, to show Nash as the hard-ass he is, the assassin with the soft spot for a lady, Lena, who we haven’t seen other than in picture in Nash’s pocket watch.

I cannot praise Jef’s art enough.  His distinct style is perfect for the story, the muted tones mimicking some of Hill’s film work, like the way Last Man Standing was very earth-toned, this is as well.  His character work is original, his figure drawing impeccable, and his work on the backgrounds, the buildings and street scenes especially, are flawless.  They almost look like photographs in their detail, and the way he colors them make it seem like they are vintage.

If you’re a fan of crime stories than look no further.  Of course even if you’re not a fan I would recommend Triggerman from Hard Case Crime and Titan Comics, because this is not just good crime fiction, this is good storytelling.