Spinning out from the events of the Star Trek Beyond movie, IDW Publishing’s Star Trek Boldly Go #2 continues the adventures of Captain Kirk and the crew of the Enterprise after they have been reassigned to new star ships and new roles. Now, many months later, Kirk and his new crew on the USS Endeavor have discovered a new threat to the Federation, one with an ominous message: Resistance is futile!

Yes, the Borg are back, as the new Star Trek series from IDW Publishing by Mike Johnson, Tony Shasteen, and David Mastrolonardo ramps up the action and excitement to warp speed with this impressive second issue. With the new status-quo following the blockbusting movie Star Trek Beyond now firmly established, writer Mike Johnson boldly splices the new timeline established by the current Star Trek movie franchise with this brilliantly staged introduction for Star Trek the Next Generation’s arch enemies - the Borg! 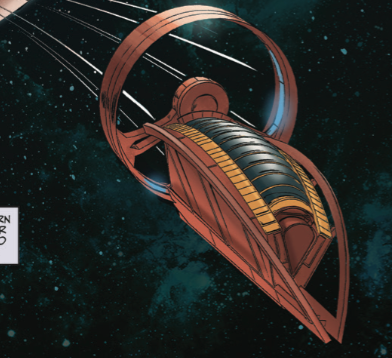 Having rescued survivors from the wreckage the USS Concord, including the ships first officer, Hikaru Sulu, Captain Kirk, McCoy, and Kirk’s new female Romulan first officer on the USS Endeavor listen intently as Sulu explains what happened on the Concord. Johnson cleverly plays with our preconceptions here, as Kirk and the crew of the Endeavor find a link with the past and the hostile vessels heading, while Spock and Uhrua reach a decision about their future on new Vulcan. We obviously know who the Borg are, but seeing this new generation of the classic Star Trek characters that we all know and love so well, gradually piecing things together, is done in a way that makes the Borg’s inclusion feel completely integral to the narrative. This is, by no means, simply a cross-pollinating genre Sci-Fi gimmick to get everyone’s attention, if anything, the Borg presence and their vessel actually poses some highly tantalizing questions and possibilities, especially when perceived in the context of the new movies alternative timeline.

Tony Shasteen’s artwork beautifully encapsulates the look and tone of the new Star Trek movie franchise as well. The likenesses of the characters are also impressively realized, in some instances almost uncannily so. For now, Kirk is acting as the interim Captain of the USS Endeavour, and we get treated to a number of gorgeous views of the vessel in space and in combat. The inevitable confrontation with the Borg is undoubtedly the big highlight of the issue, Shasteen really pulls out all the stops here, and his rendition of the Borg themselves is stunning. The colors by David Mastrolonardo exquisitely reflect the essence of each locale, bold vibrant tones showcases the bridge of the Endeavour and her crew to the max, dusty warm hues enhance the atmospheric majesty of scenes on new Vulcan, and the interior of the Borg vessel is awash with grim shades and brooding shadows.

The tension reaches a whole new level when Kirk and the USS Endeavor race to save a Federation outpost from the Borg, there’s a surprise incursion from the Borg which also heralds some chilling parallels with their tendency for choosing the most tactically advantageous figureheads, Sulu’s personal stakes are raised, and what happens next could well bring the Federation and the Romulans to the brink of war.
With its exciting storyline, impressive artwork, and stylish choice of covers, IDW’s new

Star Trek comic book series really capitalizes on the new direction that has been established while the USS Enterprise is being rebuilt. Star Trek Boldly Go #2 is another excellent issue from Mike Johnson, Tony Shasteen, and David Mastrolonardo. The mix of new and classic Star Trek themes is sublimely handled, characterization is spot on, and Iím sure this series will continue to build on its exciting new premise. If Star Trek Beyond left you wanting more, then IDW’s Star Trek Bold Go is definitely the comic book series that you want to be beaming onto your pull list this new comic book day!