Review: Oh, Okayado. I would say that at some point your trope of setting up a threat for our characters and then the villain turns out to be some misunderstood and quite adorable monster girl is going to get old. And after all the set up you’ve been doing for the 3 illegal monster girls over the last several chapters I’ll give you one more chance to remedy this situation with someone who’s going to be real threat to the story.

It doesn’t have to make everything darker or more serious, but I definitely don’t want the final monster girl teased at the end of this chapter to be someone out heroes end up helping in the end. Before we get to that however, let’s talk about the contents of the fungus story arc.

Last time a bunch of spores being admitted though the vents by a mushroom monster person caused massive RPG-style hallucinations onto our main cast. While everyone was pretty much cured the threat was not dealt with and that’s what happens in chapter 46. 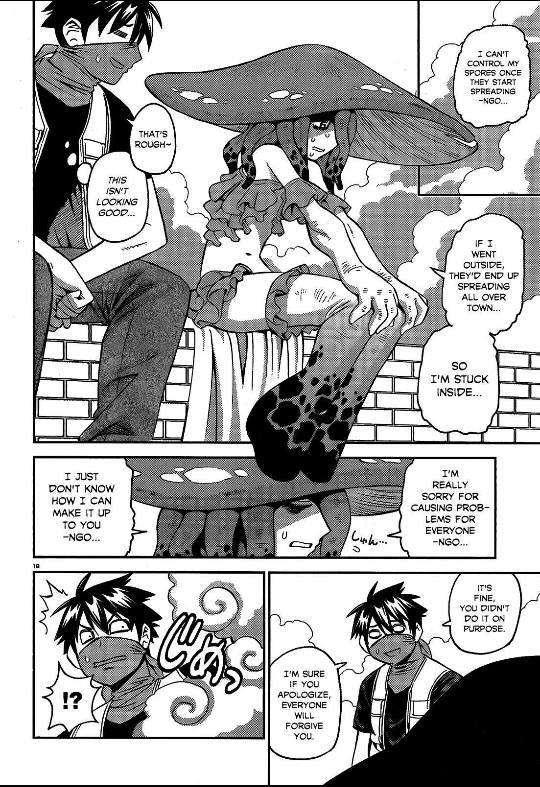 Despite that we’re nearing chapter 50 Okayado shows no signs of ramping up for it just yet as what we get in this chapter is a tale of Kimihito figuring out that the mushroom monster person is hiding in the bathroom where everything is moist and she can stay put.

Upon arriving and sitting down to talk with them we learn that the dark fiend is a cute little monster girl named Kinongo who’s petite and childlike along the lines of Papi and Suu. We learn that Papi indeed befriended the girl as she was scouting the place upon mysterious orders. I’m definitely interested to see where that goes.

And the spores she emits are simply something she can’t control. She was placed on the dangerous species list and barred from entering the country because of her possible danger to cities and human life thanks to her hallucinating spores so it’ll be interesting to see if Smith lets her stay at Kimihito’s house like all the others.

Ultimately she just wanted to friends and just as the MON squad shows up the final “actually bad” monster person arrives and it looks like it’s a vampire-type. That’s going to be fun to read about, I just hope she’s actually bad.

Final Score: 3 Spore Bursts out of 5