No matter the media, the best art makes you think, forces your brain into an area that you wouldn’t otherwise go. Weather it be the latest horror trailer (have you seen Goodnight Mommy? Yeesh!) or a book hailed years ago for dramatic triumph, these form take your brain to another world, and like it or not, encourage you to do more…gasp…learning about subjects that you would ordinarily not.

String Divers #1 is that kind of book. If you haven’t brushed up on your physics textbook recently, you may want to look into more. Basically, string theory is the theory that replaces particles in 3 dimensional space with 1 dimensional “strings”, and describes how these strings propagate through space and interact with each other. (This is my interpretation here, as a writer and artist. The closest I get to a physicist is if I pass one in the hall.) So there, you’ve learned something from a completely unreliable source today. Now back to fun comic book stuff. (Of which I am also not an expert.)

Leave it to Ashley Wood, Chris Ryall, and Nelson Daniel to figure out the specifics. This book is about a team of androids that gets shrunk and dives into the universe at a particle level. Each has a class signified by uniform color, and a specific job on each mission. (i.e. Science Class, Fighter Class, etc.) They were created when scientists at CERN decided there could be a threat to our reality from the molecular level.

This book speaks to me on so many levels. First of all, the characterization is great. Issue one focuses mostly on the androids themselves, and each has a personality that is emphasized by their class. The Stealth Class is red, and it is always looking for a place to hide, the fighter is aggressive, you get the picture. There’s something about the simplicity of the characters that I find endearing, that they’re disposable to some extent and innocent at the same time. We do get some scenes with the scientists running the operation, but not enough to really understand their motivations. This book is all about the Divers. 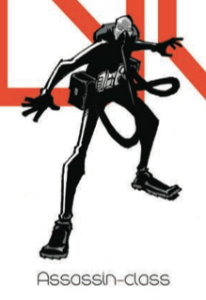 Ashley Wood has left his remarkable stamp on this book, and Nelson Daniel adds his fantastic artistic talents as well. I haven’t read a really original team book in a long time, and this one truly is that. His artist’s eye is invaluable in the design of the Divers. They’re all basically the same with different uniforms. Perhaps it’s some longing for a Voltron re-boot, but seeing those characters bouncing around the page in those solid uniforms is really satisfying visually. Perhaps it’s because you don’t have to get attached to individuals. When you read the book you’ll always know that the black-suited Diver is the Assassin-Class diver, and he is going to act in a certain way. I loved the thin-bodied design of the Divers as well. It enhances the feeling of sleekness and dynamics in the story.

This is an example of what I’m really starting to love about IDW as a company. I used to think of it as “the company of licensed properties”. There’s totally nothing wrong with that. I love what they do with those comics. But now we see that it’s a company that is expanding. String Divers #1 is a conglomeration of talent, though not necessarily what those talents are usually used for. Chris Ryall and Nelson Daniel write the story, and the creation is by Ashley Wood, known most for his artwork. It just shows that IDW is willing to give their people the chance to push forward their own ideas, and that those ideas can make great comic books.