Having escaped from the Romulan Empire, Star Trek #58 finds the elder Spock reunited with the Vulcan fleet just as Romulan war ships, led by the two remaining Romulans from Nero’s crew, begin to close in. Spock must attempt to avert total war breaking out with the Romulan Empire as the Vulcans search for a new home world in the Ceti Alpha system.

Legacy of Spock Part 4 unfolds in Star Trek #58, as fate of the Vulcan species hangs in the balance in the thrilling conclusion of this IDW series celebrates the 50th anniversary of Star Trek. 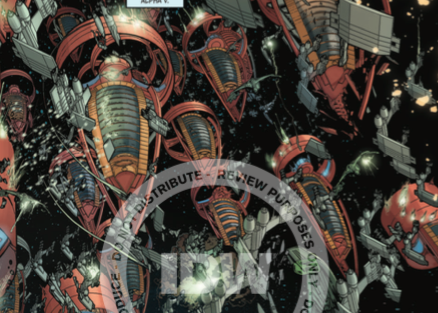 With the Romulans now hell bent on using the only remaining particle of Red Matter to obliterate the last survivors of the Vulcan race in this current alternate timeline established by the new Star Trek movies, Spock faces the greatest challenge of his life. These two members from Nero’s crew are also the last Romulan survivors from Romulus’ destruction in their own and Spock Prime’s timeline. Now in Star Trek #58 their time displaced destinies converge inexorably with Spock’s, drawing them, and the galaxy, to the brink of all-out-war!

Mike Johnson builds events in the Legacy of Spock story-arc to a spectacular finale with this exciting issue. From the sweeping opening moments, we witness the Romulan fleet engaging the Vulcan ships in battle in space while Spock observes the conflict in the skies above Ceti Alpha V. These sombre moments, as Spock comments on the Elders somewhat unsettling emotional response to the crisis, sets the tone and pace of the issue perfectly. However, the Romulans incursion across the Neutral Zone hasn’t gone unnoticed, the cavalry is on the way, and soon a desperate race is on to stop to the deployment of the Red Matter.

Tony Shasteen’s artwork is extremely impressive throughout; this issue is bursting with an eclectic mix of big action set-pieces and powerful emotional moments. The opening scenes with Spock on the surface of Ceti Alpha V are especially thought provoking, providing a stark contrast with the grandeur and spectacle of the conflict unfolding in space between the Romulan and Vulcan fleets. Shasteen certainly knows how to let the Enterprise make an entrance as well, it’s a stunning moment, and beautifully realized. The colors by David Mastrolonardo infuse every scene with sumptuous tones and shades, especially during the space battles, but it is the mind meld that Spock initiates with the Vulcan Elders which is the undoubted highlight of the issue and a moment that encapsulates the legacy of Spock in the most moving way imaginable.

Mike Johnson rounds off this storyline with an epic space battle and redemption from an unexpected quarter. It’s thrilling, action packed stuff, but it is the emotional resonance and message held within one individual’s decision which ultimately decides the fate of the Vulcan people that will really strike powerful cord with readers. Star Trek #58 concludes this superb story for Star Trek’s 50th Anniversary with Spock in a contemplative mood. Mike Johnson has masterfully encapsulated the essence of Star Trek, past and present, with this story-arc, which, together with Tony Shasteen’s impressive artwork, has ensured Legacy of Spock, especially with this issues wonderfully moving and simply “logical” coda, provides not only a celebration of the 50th Anniversary of Star Trek, but also a fitting a fitting tribute to the late Leonard Nimoy as well.