Summary: In a small town a young boy is born into this world and subsequently spends his entire life becoming more and more of a monster and for some young kids a dark messiah.

Review: God’s Child is a cerebral and haunting tale. Short, but always to the point this series is not for the faint of heart. In only 11 short chapters Kyoudai tells the story of God’s Child, a nameless boy who is born from fear and we watch him grow up being the victim of and committing even worse atrocities.

For the first two years of his life he is raised as a girl. And then from their his family assumes he has autism after he has difficulties getting along with the children. From there he grows to like a girl much older than him and witnesses her brutal rape and murder. It’s at this point the Child is sexually awakened and has sex with her dead body.

Ah, disgusting you say? That’s just the beginning of it. The boy is a genius and is able to figure out exactly how his town and the people who inhabit it work. He fits in at school so that he can remain invisible. So he can watch. He commits brutal murders of his classmates to exact revenge for a girl who’s getting terribly picked on. As he grows older he begins to command a cult of boy followers who see him as their messiah, as their God’s Child.

Years go by and he’s taught them how to become accomplished assassins in their town. He’s also forged sexual relationships with the boys. And when one boy finally decides to leave because there is a girl he likes, our God’s Child allows the other boys to kill the young boy’s new girlfriend. 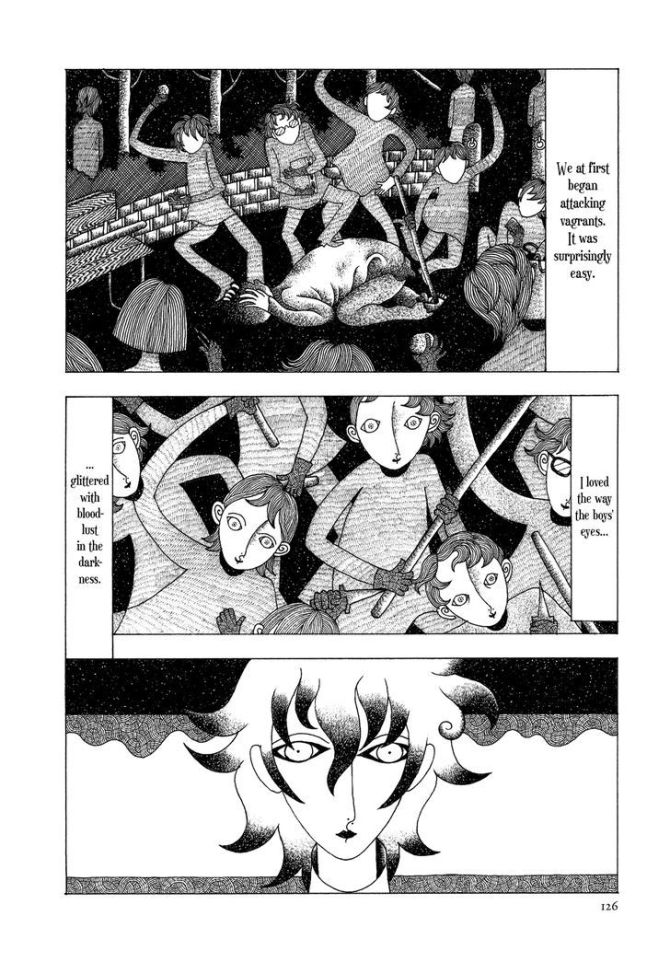 However these boys are sheep and the young deserter in turn is able to convince them to turn on their master after he stabs him and shows how weak the God’s Child really is. In true Brutus fashion Caesar is betrayed by his “friends” and torn apart by pigs after being tossed into a pen of the hungry creatures.

That’s basically the story. There are other atrocities but you can basically gather how gruesome and sickly the events are. But that doesn’t stop the story from being compelling and fascinating to read. Obviously the story is about the dark rendition of Jesus with God’s Child become a dark messiah for these boys.

But it’s also a rather interesting look into the mind of a monster whom doesn’t think he’s really doing anything wrong. He has very little feelings and is very smart at that. And unlike as it is there are A LOT of killers in this world who are very smart and feel very little when comes to actually hurting human lives.

Kyoudai also has a very intriguing art style that I really enjoyed. It’s very unrealistic and mostly gothic in its nature which suits a story like this quite well.

Yes, this is a series about bad things happening to some who don’t deserve it. With a sadistic protagonist who loves very little except for the feel of blood and boys. And yet it’s quite fascinating to read if you can stomach the events which I laid out for you above. A good story is a good story even if bad things happen in that story and this is a good representation of that. But hey, at least it has a happy-ish ending. Right?

Final Score: 4.5 Acts Against Humanity out of 5