It was only a matter of time before Titan capitalized on the success of their other BBC adaptation Doctor Who and brought the manga version of Steven Moffat’s Sherlock to the US and UK.

I’m a fan of the series.  It inhabits that sweet spot of being binge-worthy television without an end date.  Because of the busy schedules of the stars, Benedict Cumberbatch and Martin Freeman, Moffat keeps the series to three episodes that they film when the have free time.  It works perfectly with the often mismatched timeline of the original stories, and because of Moffat’s mastery of the medium, seamlessly creates a realistic interpretation of a 21st century detective.

Now my proselytizing of Sherlock is over, let’s get to the comic book.

This is an adaptation of “A Study in Pink” the first episode of Sherlock series one, and takes several plot points from some of Conan Doyle’s original Sherlock Holmes stories, notably “A Study in Scarlet” and “Sign of the Four”. 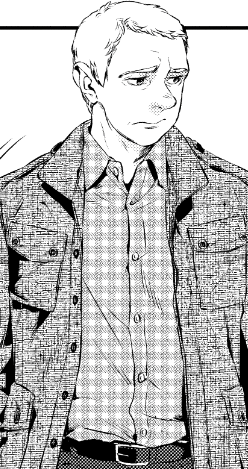 To go into a quick explanation of the story, Sherlock is contacted by Scotland Yard, more specifically Detective Inspector Lestrade, about a case he’s working which involves several suspiciously similar suicides.  There is a buzz in the media that there is a serial killer on the loose, one who induces seemingly well-adjusted and happy people to kill themselves.  Holmes is on the case with his new flatmate, Dr. John Watson.

The comic is an exacting replication of the show, or more correctly, the first half and hour or so, down to the dialogue and the merest of head shakes.  If I remember correctly it’s what a lot of manga adaptations do, and this one is no different, even to the point that the panels run left to right.  It seems that Titan has merely re-lettered this book in English, and reprinted it.  Which is fine.  At any point when there can be more Sherlock in the world that’s fine by me.  Jay. is faithful to Moffat’s story to the point that I could almost hear the soundtrack playing as the scenes were changing.

The art is pure manga.  Portrayals of the characters are true and faithful, with the manga tact of drawing a character with just the right proportions that match those of the real-life counterpart, so that you can tell who each person is.  The representations of Cumberbatch and Freeman are good and consistent.  There’s something about the manga style that’s employed here that makes it seem more realistic than a comic book, more serious, which works.

Titan’s Sherlock may be an exact comic version of the show but that doesn’t take away from the story.  Moffat is a genius when it comes to scripted t.v.  His run on Doctor Who propelled the show into main stream popularity, and the three series of Sherlock have been fantastic.  I would like to see more Sherlock from Titan, but more in the vain of their Doctor Who books, which send the various regenerations of Doctors on new adventures, but for now, this version will do, and admirably.

Brad Gischia is an artist and writer living in the Upper Peninsula of Michigan.  He is married and has three kids and a dog, all who put up with his incessant prattling about comic books.