If you don’t know who Jay P. Fosgitt is yet, you soon will.  The Michigan-based artist has recently begun drawing Rocket and Groot for Marvel, now on it’s fifth issue and going strong, and before that, had success with his own all-ages book Bodie Troll.

How to explain what’s going on here?  It’s about a dead duck, his adoptive father is a very grim reaper, who delivers the dead with a zombie chicken.  Is that enough?  Probably not, but the comic pokes fun at the horror genre in a very loving way, and makes certain references that I thought completely forgotten in the popular consciousness.  (Big Man on Campus?  “Banana Bounce!”)  This isn’t a bunch of interconnected stories, rather, a couple of shorts that give you an idea of what is going on in the Dead Duck universe.  It’s a form that is not done very often anymore, one that I grew up on reading those collected Garfield comic strips. 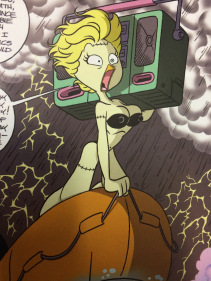 Now to the art, which is paramount when discussing this book.  You can’t discuss the style without mentioning the hugely popular Skottie Young, and his recent rocketship ride to popularity within the industry.  Fosgitt doesn’t draw like Young, rather, his style is that same kind of “instantly recognizable” art.  The best visual comparison I could come up with is Bone by Jeff Smith.   (Only today, as I’m writing this, do I realize that Smith has had the last laugh on all of us.  There is almost no way to write Jeff Smith’s Bone without it sounding like…like it sounds.)  The cartoony aspect of the work is fantastic, and his originality in the characterizations refreshing.  Zombie Chick, literally a zombie made from woman and chicken parts, makes you question yourself in the same way that Bugs Bunny in drag or that hot tub scene from Howard the Duck did.

Speaking of Howard the Duck, the comic this time, not the film, Fosgitt employs a fourth-wall-breaking John Byrne style that is so much fun to read, and will certainly become more popularly fashionable with the financial success of Deadpool. 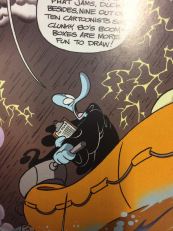 Because this is a one-shot (sadly) you also get a few extras, like a little bit of history concerning the comic and a pile of con commissions based on the characters that Fosgitt has done over the years.  There are also so bonus interpretations of the main characters by otters artists in the back.

One short note on the physical book itself.  Source Point Press has done a marvelous job with the production of this comic.  Pages are slick, printing is clean and images are sharp.  It’s a beautiful book.

Dead Duck and Zombie Chick: Rising From The Grave!!! is worth every penny.  Jay Fosgitt is a fantastic artist, but remember this guy is a creator first.  His writing is as sharp as his pencils, his jokes and colorful as his characters.  This book leaves you mourning the loss of characters you just met, and makes you wishing that Source Point and Jay Fosgitt will get together again in the near future to deliver more of those dead funny jokes.