Summary: The world has changed in the wake of Kaguya’s defeat at the end of the original Naruto series. Those who survived have went on to live normal lives, settle down, and have children of their own. Now all of those children are old enough to become fully-fledged ninja on their own and thus Boruto’s - son of Naruto - story begins.

Review: Don’t get me wrong, I’m not sitting here grumbling how terrible this series is and then continuing to read it as I continue to grumble about it. I learned that lesson from Platinum End. No, I can’t really give this series a proper judgment because I don’t know what this new team is really capable of.

Chapter 2 is out and still we’re retelling the story from the Boruto film from last year. And I get the probably thought process behind this, what about the new readers? Not everyone will have watched the Boruto film and people may be confused by what the characters are going through if they haven’t watched that. 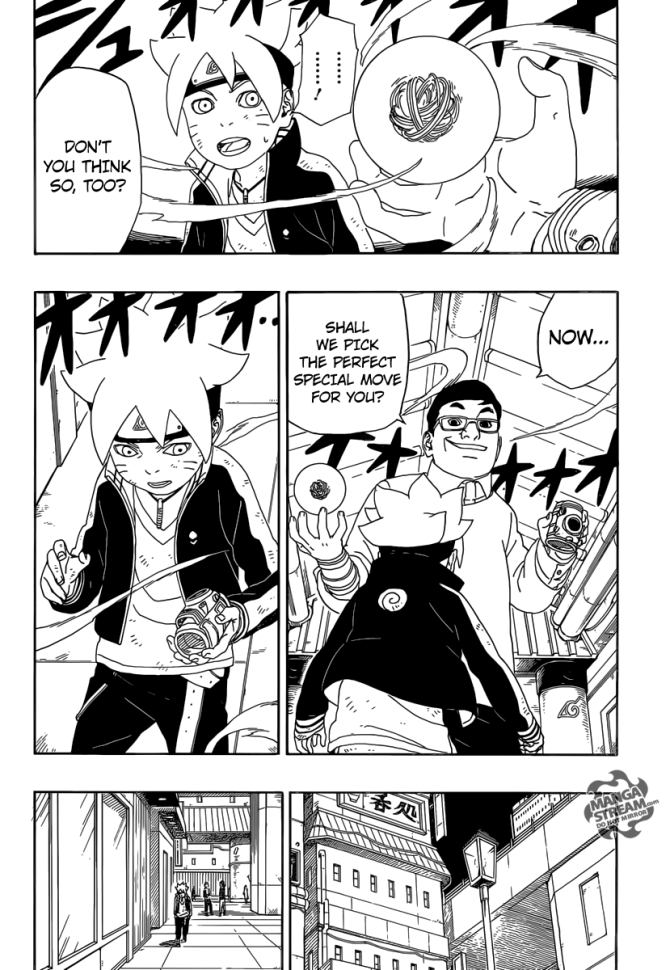 Well I argue that most new fans will probably be able to jump in just fine if you tell a really good story. Along with that instead of just retelling the full movie from scratch why don’t you just use the first few pages of the series to do a shortened recap of the film and then we can just jump in from there? Boom! Done, let’s get to the new material and give our new writer the chance to tell his own story.

Kodachi isn’t telling his own story with these chapters. He’s adapting Kishimoto’s original film story so to reiterate I can’t give this series a proper review the way I would like. And I’m sure it’s not his fault, I’m sure he was told to do this by his Editors but that doesn’t mean I have to be okay with it. Because someone somewhere made this awful decision and enacted it.

To discuss the chapter itself however it begins with Boruto asking Sasuke to become his master starting up where we left off last time. Sasuke wants to know if Boruto can use the Rasengan – Naruto’s most devastating attack besides his patented talk no jutsu. Since he can’t this leads Boruto on a mission to learn the Rasengan as fast as he can. Keep in mind it took Naruto 3 years (in story) to master this technique. And thankfully Konohamaru tells him this.

Though Boruto does get further in a day than Naruto did in months, ultimately it takes Konohamaru asking the lead scientist in the village – who we found out last chapter is working on a way for non-chakra wielding ninja to use scrolls to create chakra techniques – if he can use one of his machines to wield the Rasengan.

We also find out that Sasuke battled two individuals related to Kaguya before he came to Konohagakure to give Naruto the scroll he found. This is big news as this means there are more of Kaguya’s ilk alive. And though I know what happens I’ll save the surprises for future reviews.

Overall it’s all just stuff  I know and though Kodachi is doing his best to adapt I don’t feel the heart of the characters is there because we’re rushing through a story that’s already been told before and better elsewhere. I do look forward to seeing what he can do on his own merits as a storyteller once we get passed the movie events and into brand new content.

Ikemoto, I’m still digging his artwork. I like his style for the Boruto characters and I’ll also be excited to see what he can really do once he no longer has a movie storyboard or the movie itself for reference.

Final Score: 2 Cheap ways to use the Rasengan out of 5