The quote at the end of the afterward is the perfect way to describe this book. Writer Matt Pizzolo says, “Nothing in this book is true, but it’s all True.” And in this case, those are some pretty scary words.

Young Terrorists #1 is a monster. Clocking in at 81 pages, this is one of those books that does well in portions, or at one long sit down.   It’s a detailed account of the birth of a terrorist cell, one operating right out in the open, and one that has been sponsored by the people behind the people who run the government.

Sera Solomon is heir to a vast enterprise, the shadowy group led by her father, Gregor Solomon. Gregor is assassinated and Sera is picked up by an elite group of soldiers that bring her to a detention camp, torture her, and brainwash her.

Years pass, as they are wont to do.

Now Sera has an Internet empire built on her pay per view black market fights and a series of pornographic videos. She’s built her own empire in the center of Detroit. The area has been evacuated by the rich and powerful, and in that vacuum Sera has brought in the destitute, the forgotten, the searched for, and made them into a self-sufficient community. And she’s ready to bring the fight back to the people who imprisoned her. 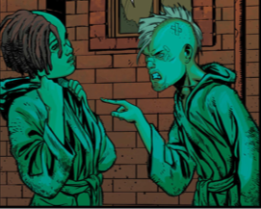 Matt Pizzolo gives us a generous amount of material in this first issue, and piles on the information. The thing I really like about this book, and the part that is most unnerving, is that he easily takes the existing media and political environment and gives it the most gentle nudge into something entirely different, and he does so quite skillfully.

Amancay Nahuelpan’s artwork is really beginning to grow on me. I’d hate to say that there is a “Black Mask Type” of art, but this looks like it fits in well with the other books they put out. The colors by Jean-Paul Csuka could have something to do with that as well, but Nahuelpan has just a little bit of a cartoon edge to his art that makes it universally good for many different mediums and books. I could see him drawing on 2000 A.D. or Tank Girl and then flipping right around and drawing something more serious like this book just as easily.  (And seriously, how bad ass is does this girl look?) 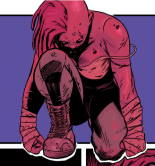 Black Mask Studios has made a reputation has a company that is willing to publish books with a hard edge, one ones that take a hard line on politics. From animal cruelty, to the advent of the information age and the Occupy Movement, the writers that work there are people who are not only talented but ones that are trying to make a change by highlighting the worst possibilities.

It’s funny where your mind goes as you’re reading. As I went through Young Terrorists #1 I thought of A Clockwork Orange, Natural Born Killers, and Fight Club. But this book is much more. It wraps up secret societies, conspiracy theories, and the mad workings of behind-the-scenes power, and adds a human element that makes you feel for the characters. Pizzolo shows how extremist groups can seduce young people, and is on the cusp of showing what those young people are capable of when they are placed on a larger board by a cunning mind.