Summary: When God created man, the Earth was the realm of the demons. God and the Demons made a pact, that until the 7th month of the year 20XX, mankind would be allowed to grow and call the Earth their own. But when that month and year came, the demons would have every right to call upon Armageddon and take back their planet. Now, that time has come, but only if Hell can send its best demons to free their queen who has been embarrassingly sealed within’ the testicles of our main character: Kohta.

While Oretama does follow a lot of the tropes that comes with a harem comedy, such as the main female character being a tsundere type that’s actually madly in love with our main character but has trouble admitting it to anyone, including herself, and our main character “getting” with a lot of girls throughout the series, if you take a look at it from afar Oretama can be seen as a possible deconstruction of the comedy harem genre.

I may be stretching it a bit far on this possibility, but there’s a lot this series does that it seems to do in parody of the genre it is a part of rather than doing it because it’s a part of the harem comedy genre. Kohta isn’t found attractive by any of the demons throughout the series except for our main female lead Elyse, and the girl he has a ginormous crush on: Minayo. Instead most of his sexual misadventures are simply because he has the Queen of Terror Lady Emanniel held hostage within his balls.

Now, let me backtrack a bit explain this whole sealed away thing. To keep the world from reaching Armageddon, the angel Michael attempted to seal Lady Emanniel away before she could destroy mankind. However, our unfortunate lowlife hero Kohta stumbles into the scenario while drunk and starts peeing on the orb she was going to be sealed away in. This causes Michael to accidentally seal her within Kohta’s balls and the only way mankind can escape destruction is for one whole month he must not ejaculate or he’ll free Lady Emanniel. Easy enough, right?

It would be, but Hell sends Elyse, a lesser demon, after Kohta in order to make him do his business. But after she falls for him, the demons get fed up and throughout the long month of July Kohta and Elyse find themselves avoiding demon after demon as each one, stronger than the last, come after him with all their might. All the while Kohta gets lucky and starts building a genuine relationship with the girl of his dreams Minayo.

The really interesting thing about this series then becomes how does Kohta get out of these situations, and will he be able to keep up the abstinence for this labor intensive month? How will Minayo react to all of this if she finds out? Oretama, while every once in awhile succumbing to the age ole trope of stalling for time when it comes to a few chapters, meticulously builds up its story as it tells of Kohta’s month through almost each chapter representing a full day. This way it does kind of get boring at times and that’s a shame, because it begins to feel like a monster of the week story. And for a while you’re left wondering how the story could possibly end.

However, once Oretama reaches its crescendo, its not so much that there are any mysteries left to the story to solve, but literal hell has broken loose on this Earth just so these demons can get Kohta to do his thing and free Lady Emanniel and so it becomes more of a race against the clock. They even get Satan brought into this, which you may be wondering why isn’t Satan the ruler of hell? Oh, she is, but she rules alongside Lady Emanniel. It never is explained why they need Lady Emanniel if they have Satan’s power, but what they hint at is that God gave Lady Emanniel the power to destroy mankind in one blow and not Satan, therefore Satan needs an army in order to destroy us. Lady Emmaniel does not. 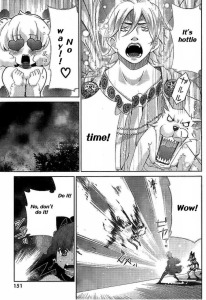 The ending also surprised me by becoming a literal deconstruction of the tsundere type character, and further boosts my theory about this series being more of deconstruction rather than just another harem comedy. It also becomes apparent that there are in fact consequences to the actions of all our characters, which was quite nice to see.

This is a really way out there series, you’ve gotta have a few certain interests in order to fully enjoy it, but if you’re willing to give it a shot it’s definitely worth the read. Oretama has a story to tell and it does so at its own pace without overstaying its welcome. It doesn’t drag things out unnecessarily all the time, and while it does have it its detractions story wise, all the characters firmly remain fun and infectious throughout the entire run. Don’t take it too seriously though, as the story never takes itself too seriously either.

There are 5 special chapters as well. A few of them are fun, but some of them need some stretched imagination if they’re to be considered canon. As one of them features a woman getting the “king of hell” trapped within her, and at first I figured it was just an alternate dimension kind of tale, but the way it ends firmly plants in the main timeline. Since the “king of hell” is neither mentioned nor appears within the main series, I had to make up my own head-canon to explain the events going on.

Oretama is a fun gem of a romp hidden in a sea of other series that look exactly like it. But give it a shot, and you won’t be disappointed. It’s not too long, at only 41 chapters. There’s a lot more to like than there is to hate, and I fully stand by my assertion that whether the creators meant to or not, it exists as a deconstruction of the harem comedy genre as a whole. So go check it out.

Final Score: 3.5 Premature Celebrations out of 5