Letterer: Taylor Esposito
Bayani is fun and cool. It’s a kid friendly series from Travis McIntire and Grant Perkins that is both steeped in Filipino folklore, and at the same time modern and youthful. The story follows young Bayani, a Filipino boy that is set on a quest to save his island village, and his family. For the last month, nightfall has not come to the isle of Laguna that Bayani inhabits. It has been a constant scorching daytime that is causing drought and also affecting people to succumb to dehydration or heat stroke. Bayani’s father is no longer able to fish and provide for his family, so Bayani is stepping forward to take that role for now. Bayani is recruited by the River God to rescue each of the Moon God’s nine daughters, which will bring back the night, and save the island. His best friend, Tala, and a mysterious helper named Maria aid him. 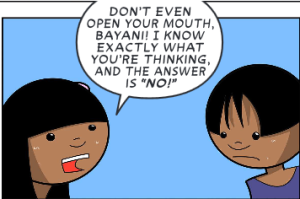 The relationship between Bayani and Tala is an interesting one. They banter and bicker lightheartedly, which helps to keep this adventure fun and briskly paced. The situation is set up very well in the first issue, so that we know who everyone is, the quest set before them, and the first glimpses of challenges they will face from “Old Ghosts” to “River Gods” to witches, drought, and sickness, being capsized in a fishing boat, climbing a volcano and more. The quest is a formidable one, and the book does a good job of making Bayani and Tala appear to at least be up to taking on the quest. It strikes a nice tone in that it’s aimed at kids, yet has some serious stakes for the characters. I also have to give it up to McIntire for passing the Bechtel test right off the bat by having Maria and Tala both be strong female characters that are not there just to prop up Bayani. They seem to have drive and motivation and an interior life each to their own. The quest may be more for Bayani, but he is not in any way more powerful or stronger than the girls in his group. I’m genuinely intrigued about where this is going to go. I also plan to collect these for my daughter, as I think it’s a great adventure book that she’ll love. 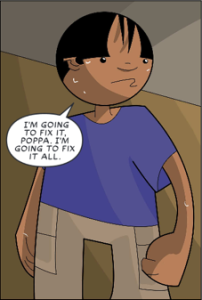 Perkins’ art is very distinct, very geometric and largely either angular or very round, and flat.  It has an animated feel to it, and after some consideration, I landed on that it doesn’t just look animated, it looks like a flash animation style to me. Bayani and crew could find themselves interacting with Homestar Runner and Strong Bad with little trouble. It’s got a very bright and flat effect, but not so much as it doesn’t show depth when needed. Perkins has some chops, and does good storytelling in these pages. Clarity is a strong point here. One issue I noticed is that in a couple of places, I noticed that Bayani was meant to be terrified or scared, but due to the stripped down art style, the facial expression read more to me like happy excitement. Perkins pulls off a lot with little lines here. I would just like to see a little more attention to selling the facial expressions or poses when it’s crucial to the story telling. Perkins seems so dedicated to the linear flat blocky art style, that his coloring also has a flat look to it. That’s not uncommon, but I did notice that when he wants to do a gradient, he does so in distinct color shapes that have actual visible lines between them. It is intentional I am sure. It is a gradient that is meant to be not smooth at all, but have distinct areas of color. The effect works overall, but it underscores Perkins’ flat style.

So, if a young, all-ages Indiana Jones meets Pokemon by way of Filipino folklore type of story with super flat and bright graphical art sounds interesting, this is the book for you. I was entertained, and my interest was piqued for more. As I understand it, there is an agreement for the first 3 issues, with more planned. There is also a Kickstarter up to cover half of the costs for the first 3 issues. It has a multitude of rewards, including (full disclosure) one that features original art provided by me. Don’t let that sway you either way. This book is quality on it’s own merits, independent of any Kickstarter rewards. This is the kind of book that needs to get into the hands of children. Highly recommended overall.
Kickstarter link: https://www.kickstarter.com/projects/1626767528/bayani-and-the-nine-daughters-of-the-moon