Review: While I still feel like the overall current storyline is a travesty in the making, you know what, I actually really liked this chapter. Gasp! I know! But things, interesting things, actually happened this time around. Erwin – for as far as  I can tell – actually died after getting hit by a rock being thrown by the Beast Titan at well over 100 mph, and for that matter Erwin’s entire fleet was wiped out as well during the same bombardment.

All that death however was a distraction for Levi to swoop in from behind and permanently take out the Beast Titan. Did he succeed? No, but he came damn close. Destroying the Beast Titan’s arm and forcing him to retreat from his Titan body into his human physical form. We also get this badass scene where Levi basically skewers the Beast Titan’s human self by stabbing him through the mouth and face under his eye. How that doesn’t kill him however – one will never know. It’s more of a conundrum when the man is saved by a Titan and still manages to yell out commands to the other Titans after having his mouth ran through with a 3D Maneuvering Blade. 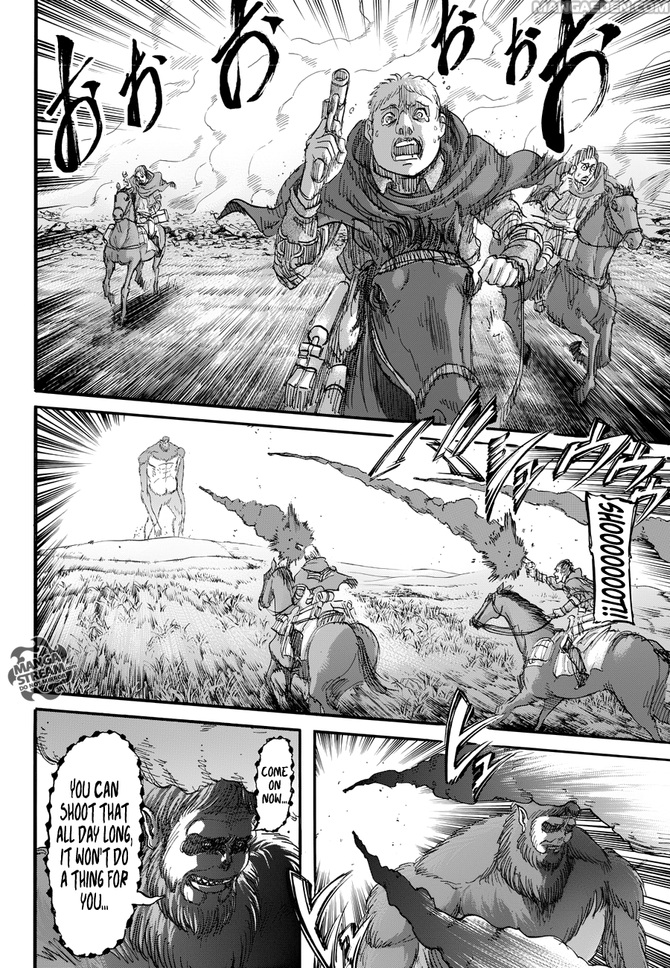 Armin also comes up with a plan to take down the Colossal Titan that may lead to his death. We don’t know the details of the plan yet but I’m curious to see what’s coming. Armin definitely won’t die, and if he does it’ll be because he’s the least favorite by most fans (not this fan) in the Eren, Armin, Mikasa trio. But I will be impressed if he does.

We leave off with Levi being forced to take on multiple Titans by himself in a free-for-all battle. I don’t want him to go… but with all the realism this series started with constantly reminding us that anyone can die or be hurt by these hulking creatures I will be remiss if he gets through all of them scotch free. He’s good but surely he’s not that good… right?

This chapter has renewed my interest in seeing what happens next as the stakes are being raised for everyone on both sides. However this ‘war’ really does feel lackluster in its execution and I hope it’s not the end all be all brawl of the series. I know we’re fast approaching volume 20, which Isayama has said in the past he wants vol. 20 to be his last.

If it is the final battle, then I will be fully disappointed. Otherwise, this series still has a chance to save itself and that begins now with this very chapter.