Summary: The world has changed in the wake of Kaguyaâ€™s defeat at the end of the original Naruto series. Those who survived have went on to live normal lives, settle down, and have children of their own. Now all of those children are old enough to become fully-fledged ninja on their own and thus Borutoâ€™s - son of Naruto - story begins.

Review: Itâ€™s well-documented my loathing of how the original Naruto series ended. While I liked the final chapter itself, every story leading up to it that consumed most of the long winded Shippuuden arc I simply was not a fan of. And had sadly become disillusioned with the entire series years before the story reached its climax. Yet, Naruto was a huge part of my life growing up and the bonds you make with those characters and their world are, ultimately, hard to break.

Which brings me to Boruto: Naruto Next Generation. I may be disillusioned with the original series, but I always have felt Kishimoto works best when writing about kids. Especially considering his best run of Naruto is everything preceding the time skip that more or less made all of our characters young adults. With Boruto heâ€™s only returning as an overseer, but that doesnâ€™t mean his own ideas and writing style wonâ€™t be present in this series going forward.

And so we have Boruto, a story about a kid living under his fatherâ€™s immense shadow and eventually breaking free of that. Although even if he ever does within the story Narutoâ€™s very name is right there in the title, constantly reminding us that this is indeed the continuation of what he started. Sorry Boruto, youâ€™ll never break free.

But how is the first chapter of this new lengthy continuation by a brand new writer/artists team? Does it live up to the hype eating away at the Naruto fandom? Is it something, that if you never read the original series before, that you could easily jump into and understand without assistance? Is the art any good?

Well, to answer the first question no it really doesnâ€™t. To answer the second question, eh, itâ€™s easy to jump into but I wouldnâ€™t suggest it. And to the third, eh, itâ€™s passable. 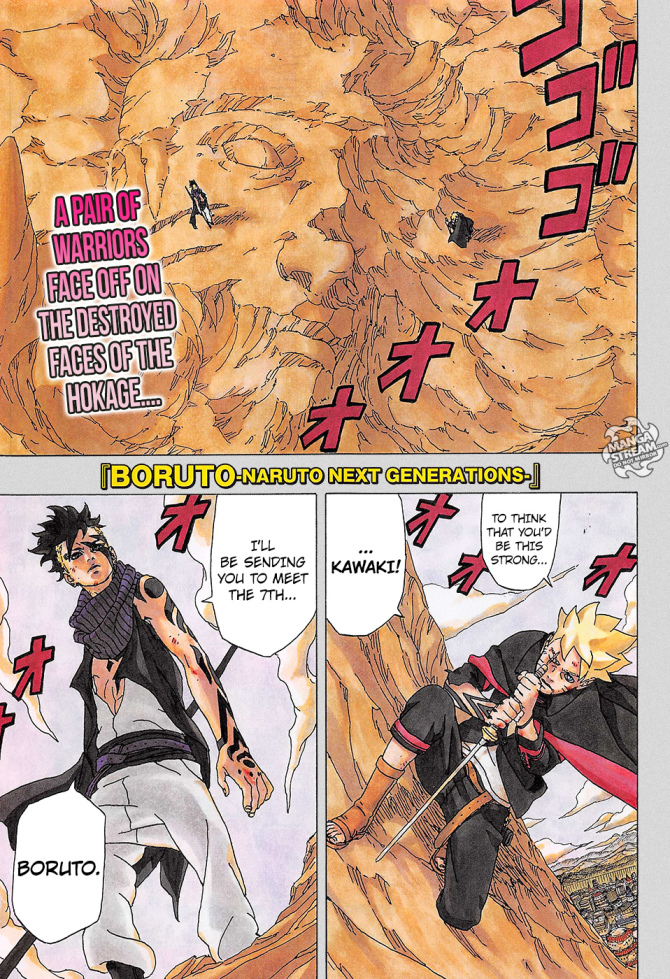 Chapter 1 of Boruto opens up with a pretty awesome scene that I canâ€™t wait to see played out. With an older Boruto tattered and ragged, beaten and bloody, and battling another ninja atop the mountain of Hokageâ€™s which has been severally damaged. Along with Konoha village â€“ both the old and the truly odd new Konoha (made up of modern day skycrapers) in ruins. And a proclamation from the enemy ninja, Kawaki, exclaiming that the era of shinobi is at its end. Awwweeessome.

However, it then jumps back in time to the past â€“ our present for Boruto â€“ to narrate that this is the story of a young ninja, but not of one who wanted to become Hokage, that was his dadâ€™s story. Okay, Iâ€™m on board so far. But as the narration continues Boruto tells us that while this is his story, at the beginning it was a bit of both of their stories.

And then the first chapter completely derails itself by deciding to retell the entire story of the Boruto: Naruto the Movie anime film that was released last year that told the story of Boruto in order to, like the Mitsuki one-shot from last week, bridge the gap between the original series and this series. I do get the probable thinking behind this need to retell a story that already exists. In case some people havenâ€™t seen the film they may think this is too hard to jump into.

However, we also have a complete novelization of the film that exists as well as this isnâ€™t even a good retelling. They completely cut out whole segments of the film in order to fit the story into the page space allotted to them which actually impacts the characterizations of some of these characters and the emotions that drive them, as well it just causes a rushed narrative that has absolutely no room to breath and you want this to be your opening mark on a brand new series?

People can just go watch the movie. Really, itâ€™s not that hard for them to do so. And itâ€™s actually a pretty damn good movie surprisingly enough. This doesnâ€™t even scratch that surface of emotion you get from the movie and the entire time I was reading it it felt like I was experiencing a stupid compilation film that some studios make to shortcut the story they already told elsewhere. And you know else did this crap of retelling a movie in the serialized official sequel for God knows why? Dragon Ball Super, an official sequel to Dragon Ball Z and the two new movies that came out recently. It chose to use its first 27(!!) episodes to retell two movies we had already seen and that it in itself was a sequel to and now here I am reading Boruto: Naruto Next Generation and its pulling the same stupid stunt.

I canâ€™t even with this. Thankfully I do know where they cut off this chapter as far as its relevancy to the movieâ€™s story, so I reckon either in chapter 2 or 3 weâ€™ll get the end of this stupid retelling arc and then onto the actual good stuff. The new stuff, the stuff we all reading this actually want to see.

But for now, for the first few months, this is what weâ€™re dealing with. I am none too excited.

Onto the art aspect of it all: the artâ€™s alright. Itâ€™s definitely not Kishimotoâ€™s style or even close and so all the characters do look off. But I definitely donâ€™t hate it. Thereâ€™s this strange panel where Hinata is crying to Boruto and you see her face straight on and for whatever reason Ikemoto decided to draw her crying out of only one eye and itâ€™s the strangest thing because she can see clearly out of both. Itâ€™s just a really odd decision to make. Overall though I could get behind this being the new norm art style for these characters. It will take some getting used to though.

Final Score: 2 Terrible Retellings of Another Story out of 5

P.S.: Assume that until we get to original story material the final scores for this series will be rather low. The true test for Boruto will be once it gets into untested territory from its new writer, material not originally written by its original writer. The kind of stories that we all really want to see.

Derrick is a born and raised otaku with a love for comics, anime, manga and movies. The full list is pretty long, but thatâ€™s just the basics. Stories set in space are his bread and butter.