Review: Erwin is one of the few characters left I really give a damn about. So this chapter really hit me hard. But only on a certain level, probably not on the level Isayama hoped it would. This chapter sees Mikasa, Armin and their team go after the Colossal Titan after he kicked Eren like a rag doll into the wall last chapter.

The steam the Colossal Titan can exhale from his body however stops them in their tracks an even injures a few. But not too badly. Then we cut to Erwin having to make an incredibly hard decision for his team as Levi listens. Erwin’s plan is to charge after the Beast Titan with all his remaining Corp at his side. Whilst Levi goes in for the kill from behind.

We get a truly touching scene with Erwin where he looks back on his life, realizing he’s come all this way to see what’s in the basement but to save the lives of a few he must sacrifice his. And during this moment of clarity he sees around him all the Scouting Legion soldiers that died under his command while fighting the Titans. He’s even able to give a grand speech to his men in order to convince them of the suicidal attack.

Again, Erwin is one of the few characters left I give a damn about and though the final panel of this chapter shows Erwin perhaps dying from being impaled by a boulder until the chapter confirms it I can’t guarantee anything. I mean, after all, the Armored Titan also returns this chapter after getting his head blown off. But apparently his nerves – which were not connected to a destroyed brain – are sentient enough to regrow him. Soul and all as we learned a few chapters back. 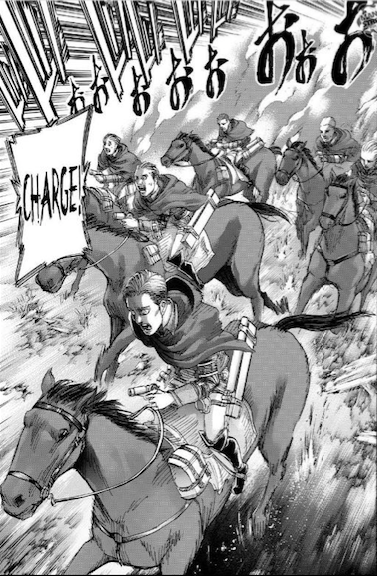 If this really is the end of Erwin it’s great to see this man, an ultimately selfish man, go down fighting like a hero in order to take Eren’s group to victory. I also appreciate that Levi didn’t try to talk him out of it. Levi understands the situation they’re in, he understands his skill with the 3D Maneuvering Gear, he understands that Erwin only as one arm so even if he wanted to switch places he can’t because Erwin can’t navigate in the air anymore.

He understands how important this decision means to his best friend. And Levi is not going to take that away from him. This is another good chapter to illustrate these two men’s friendship in their final moments and what it’s all lead up to revealing.

The only reason it did not resonate with me as much as I’m sure Isayama hoped it would were for a couple of reasons. One, I hate the situation these characters are in. I think if the Beast Titan just sicked his own Titans on the Corp he’d win the day in an afternoon. And until I see  Erwin die on panel I can’t tell if this is his final outing for real.

And even the last character I saw die on panel HAS COME BACK.

I’m tired of sounding like a broken record with this series but I do know it’s capable of so much more. It had a great consecutive run of good storytelling until the “True King” arc began. I’m not sure if that is that arc’s official title but at this point I don’t care either.

Overall this was a better chapter than most have been lately. If not for its heavy focus on a great character who deserves a proper send off. And if this is the closest we get to that well then by damn it really wasn’t a bad one. Just don’t let me down next chapter Isayama. Let him stay down.

Final Score: 3.5 Moments of Clarity out of 5